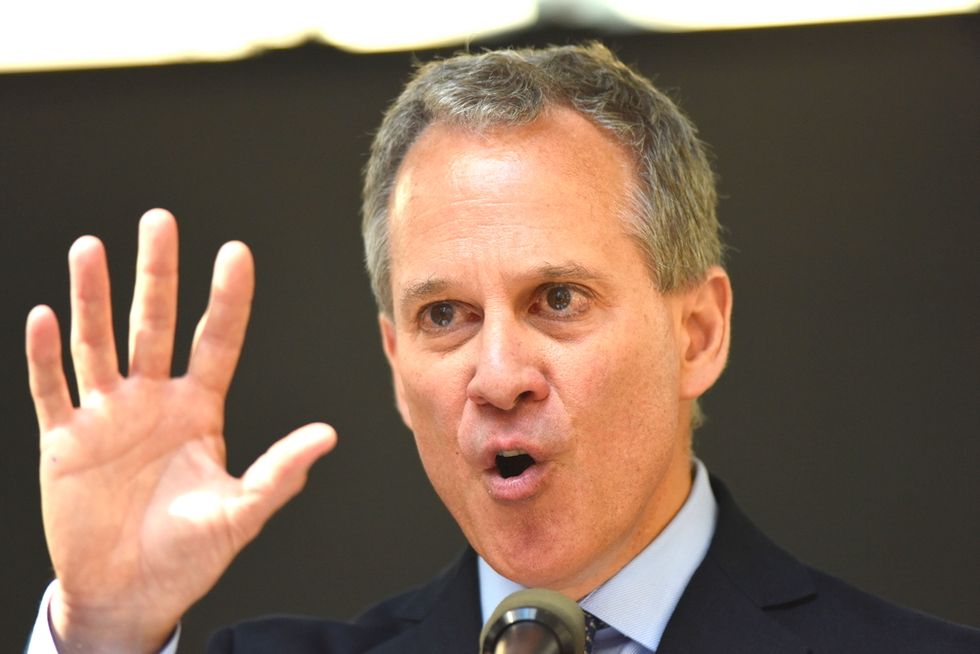 New York Attorney Gen. Eric Schneiderman said that Democrats need to get "tougher" in the fight against Pres. Donald Trump and the Republican Party. Liberal constituents, he said, should hold their elected officials to account as energetically as conservatives do.

In a Politico profile, Schneiderman talked about what he has learned after litigating multiple lawsuits against Trump -- including the Trump University fraud suit, in which the then president-elect paid out $25 million to claimants in order to settle the case before taking office.

Having fought Trump in the courtroom -- and survived an aggressive Jared Kushner-abetted character smear in the New York Observer -- Schneiderman said of the newly sworn-in president, “He’s not playing hide the ball.”

“He’s not that different offstage from how he is on stage," Schneiderman confirmed. "This is him. He is a complicated guy in some respects, but he is used to making his own rules and he plays a very aggressive game. When he wants to get something done he will use every tool at his disposal.”

“We have to be a lot tougher," said in a speech after the 2016 election. "We have to be as demanding of our elected officials as conservatives are of theirs. Nice words are not enough anymore. You have to deliver rewards. If you can’t deliver rewards on climate, on human rights, on protecting immigrants, on unwinding our failed experiment in mass incarceration, well, we love you and we will help you find another job, but right now, we have to find someone else that can do the job.”

Since the election, Schneiderman has been conducting a full review of his office's pending cases with the Justice Department and bracing his personnel for changes, urging them to prioritize.

"Another mission was to prepare rearguard actions to protect New Yorkers against whatever onslaught might come from Washington," wrote Politico's David Freedlander, "including laying out new sanctuary city guidelines, and possible responses if the administration defunded Planned Parenthood or the EPA. They also began to lay the groundwork to fill in as regulators in areas where the federal government might stop enforcing laws already on the books, from labor laws, to securities regulation, to clean water and clear air enforcement."

The question people keep asking Schneiderman is whether any of the actions he is pursuing against Trump and Trump, Inc. could lead to the president's impeachment.

Schneiderman says he's unsure whether Trump's offenses rise to the level of "high crimes and misdemeanors."

“There are a lot of reports of egregious acts he’s taken in the course of his business: his sexual assaults and other things—that’s all fair game,” he said. “We’re not -- you know, we’re not out to get Mr. Trump. We’re just out to enforce the law. And if he’s broken New York law, we will enforce the law.”