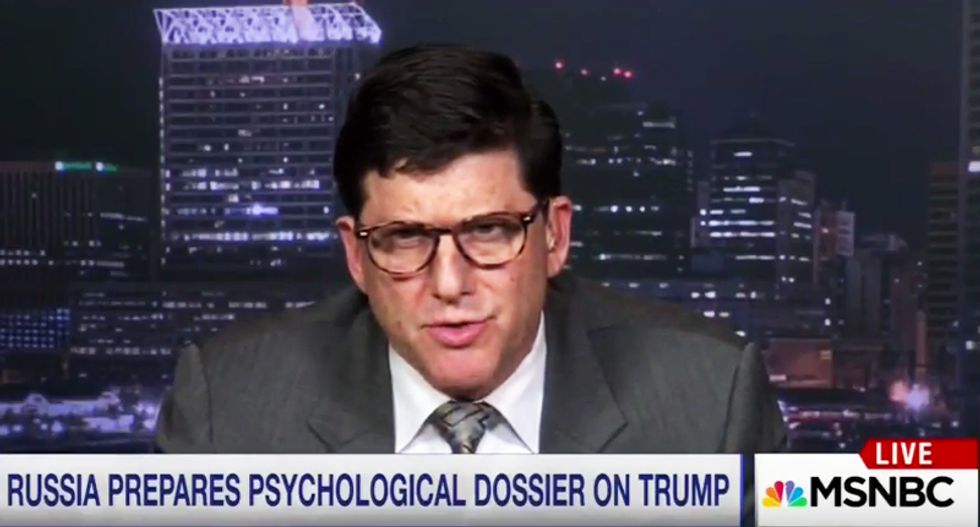 Appearing on MSNBC Tuesday night, a psychologist warned that fellow doctors have a responsibility to point out that President Donald Trump exhibits clear signs of mental illness and shouldn't be trusted with the nuclear codes.

Speaking with host Lawrence O'Donnell, Dr. John Gartner claimed, Trump is a "paranoid, psychopathic, narcissist who is divorced from reality" who will put the nation at risk.

"If we could construct a psychiatric Frankenstein monster, we could not create a leader more dangerously mentally ill than Donald Trump," Gartner began. "He is a paranoid, psychopathic, narcissist who is divorced from reality and lashes out impulsively at his imagined enemies. And this is someone, as you said, who is handling the nuclear codes."

It has long been a policy within the psychiatric community to not diagnose individuals without personally interviewing them, but Gartner -- who works as a therapist in Baltimore and New York City -- warned that, in the case of Trump, that should be set aside because there is ample evidence based on Trump's public utterances.

"I would argue to my colleagues that those who don't speak out are being unethical," he stated. "If we have some knowledge and understanding about the unique danger that Donald Trump presents through our psychiatric training and don't say something about it, history is not going to judge us kindly."

Appearing with Gartner, Dr. Lance Dodes also warned against not taking a hard look at Trump's mental state, which he believes disqualifies him from holding the highest office in the land.

“He lies because of his sociopathic tendencies that Dr. Gartner was talking about,” Dodes suggested. “He lies in the way anybody who scams people does. He’s tried to sell an idea or a product by telling you something that is untrue. There is also the kind of lie he has that in a way is more serious -- that he has a loose grip on reality. We can say that because he lies about things that aren’t that important."

"I think what that indicates is that he can’t stand an aspect of reality that he doesn’t want, so he rejects it," Dodes continued. "His grasp of reality, his attention to reality is loose. This is an extremely dangerous trait in a president. It actually makes him unqualified.”