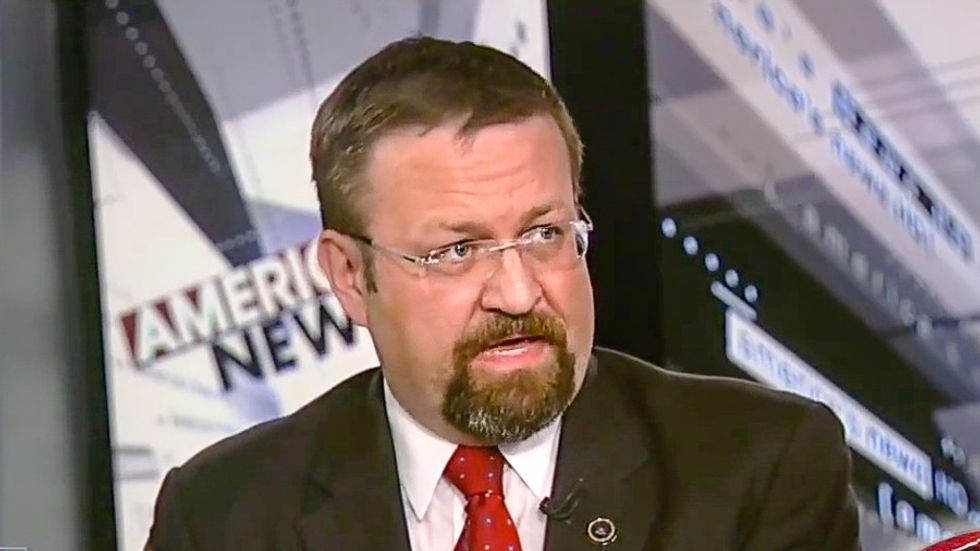 Forward.com reported Friday that an in-depth look at the British-born Gorka's time in Hungary from 2002 to 2007 shows that he was heavily involved with the far right, including writing and editing for a newspaper known for its racist, anti-Jew content.

"Gorka’s involvement with the far right includes co-founding a political party with former prominent members of Jobbik, a political party with a well-known history of anti-Semitism; repeatedly publishing articles in a newspaper known for its anti-Semitic and racist content; and attending events with some of Hungary’s most notorious extreme-right figures," wrote Forward's Lili Bayer.

When asked about his connections to Hungary's far-right, Bayer said, Gorka -- whose parents are Hungarian -- "instead pivoted to talk about his family’s history."

“My parents, as children, lived through the nightmare of WWII and the horrors of the Nyilas puppet fascist regime,” Gorka wrote to Forward via email.

The Nyilaskeresztes Párt or "Arrow Cross Party" ruled Hungary from the fall of 1944 to spring of 1945. The party murdered thousands of Jews before World War II ended and its leaders were arrested and prosecuted as war criminals.

Gorka and his American wife worked at Breitbart.com as editors and self-styled counterterrorism experts. Forward said that Gorka is now part of former Breitbart CEO Stephen K. Bannon's Strategic Initiative Group, a cadre of far-right White House staff and advisers whose power and reach in shaping Pres. Donald Trump's policies are believed to rival those of the National Security Council.

Gorka, Bayer wrote, has cut a meandering path through jobs working for three different national governments and a variety of publications. His marriage to Cornell Iron Works heiress Katharine Cornell in 1996 enabled him to become a U.S. citizen.

"During large-scale anti-government demonstrations in Hungary in 2006, Gorka took on an active role, becoming closely involved with a protest group called the Hungarian National Committee (Magyar Nemzeti Bizottság). Gorka took on the roles of translator, press coordinator and adviser for the group," Bayer said.

The Movement’s newspaper, Magyar Jelen, was investigated in 2004 for publishing an essay advocating for the removal of all Jews from Hungary.

"We should get them out. In fact, we need to take back our country from them, take back our stolen fortunes. After all, these upstarts are sucking on our blood, getting rich off our blood," wrote Movement leader László Toroczkai, who is currently the leader of Jobbik and mayor of a Hungarian border town. Last year, he announced that his goal as mayor was to purge the town of all Muslim and LGBT residents.

In 2007, Gorka co-founded a right-wing political party -- the New Democratic Coalition -- in Hungary because he believed that the country's conservatives at the time were too heavily influenced by Hungary's communist and socialist history.

"The Coalition was established in direct response to the unhealthy patterns visible at the time in Hungarian conservative politics. It became apparent to me that the effect of decades of Communist dictatorship had taken a deeper toll on civil society than was expected," he told Forward.

His co-founders in the party included Jobbik militants and Toroczkai supporters.

"Jobbik has a long history of anti-Semitism," said Bayer. "In 2006, when Gorka’s political allies were still members of Jobbik, articles in the party’s official online blog included headlines such as 'The Roots of Jewish Terrorism' and 'Where Were the Jews in 1956?', a reference to the country’s revolution against Soviet rule. In one speech in 2010, Jobbik leader Gabor Vona said that 'under communism we licked Moscow’s boots, now we lick Brussels’ and Washington’s and Tel Aviv’s.'”

Gorka denied to Forward any knowledge of his associates' connections to the far right and said, “What they did after I left Hungary is not something I followed.”

During his time in Hungary, Gorka penned essays for Magyar Demokrata -- a newspaper that was deemed in 2004 by the U.S. State Department to be "published anti-Semitic articles and featured articles by authors who have denied the Holocaust.”

Gorka said to Forward, "Everything I did was in the interests of a more transparent and healthy democracy in Hungary."

He was photographed at Trump's inaugural ball wearing a Hungarian medal associated with "a knightly order of merit founded in 1920 by Admiral Miklos Horthy, Hungary’s longtime anti-Semitic ruler and Hitler’s ally during World War II."

“In 1979 my father was awarded a declaration for his resistance to a dictatorship, and although he passed away 14 years ago, I wear that medal in remembrance of what my family went through and what it represents today, to me, as an American,” Gorka explained to Breibart on February 15.

In recent weeks, Gorka has made headlines for his vilification of CNN's Jake Tapper, who he called a sexist and a bully for his aggressive questioning of Kellyanne Conway, who Gorka said was a victim of Tapper's desire to “treat a woman as a punching bag.”

Also, Gorka was recorded in a half-hour angry rant at one of his critics, terror expert Michael E. Smith II, who Gorka called and harangued for nearly half an hour. Smith recorded the conversation after Gorka threatened to sue him.