The slow death of bipartisan relationships 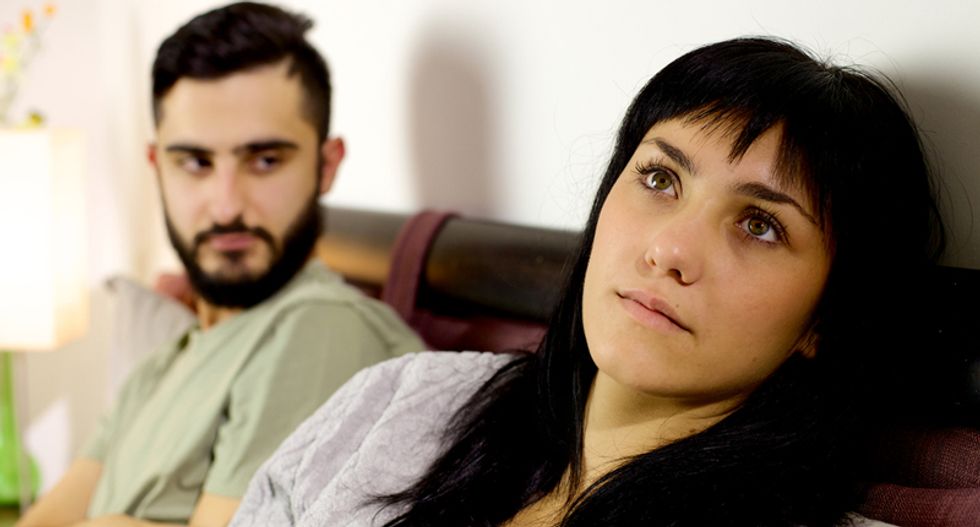 Sexual attraction can be fickle. One minute you’re turned on by the mysterious allure of a new crush, and the next minute that same fire is extinguished by a variety of possible turnoffs.

Some people crave a chase, or a partner with perfect facial symmetry. Others just want a mate who agrees that it’s not okay to vote for a candidate who admits to frequent unwanted pussy grabbing.

The 2016 election unquestionably deepened the divide between liberals and conservatives. In fact, the disdain people have for the opposing party has some researchers wondering if Americans are still willing to reach across the aisle in search for a romantic partner.

What’s worse - loneliness or a relationship that inevitably leads to costly therapy sessions?

In the 1950s and 60s, political identity wasn’t really a factor in establishing relationships. Sure, politics were way less polarized back then, but women also weren’t encouraged to have political opinions. Thanks to advancements in gender equality, you now have salty women like me who not only follow politics, but also share their opinions on the daily.

Today it’s clear that people on both sides are less inclined to connect with prospective partners who don’t share political values. Take Gayle McCormick, for example, who left her husband of 22 years after he merely floated the idea of voting for Trump.

Apparently Gayle was so perturbed that her beau would include himself in that basket of deplorables that she tossed him to the side almost as savagely as an Iraqi reporter tossing a shoe at George Bush.

Seriously though, how impressive were Bush’s shoe-dodging skills? If only he was as talented at dodging a recession or the largest terrorist attack in U.S. history.

Anyway, Gayle’s story is just anecdotal evidence of a larger dating trend we’re seeing in the country. Match.com noticed that they weren’t experiencing their usual January uptick in user activity. So they decided to conduct an unscientific survey of their users to see what the problem was.

Turns out that 29 percent of liberals said they’re less motivated to date because of the dictatorial regime we have in office. Biological anthropologist Helen Fisher believes that the Trump-era depression liberals are feeling contributes to a diminished sex drive. Only 14.2 percent of conservatives feel the same way.

While feeling depressed about Trump’s victory might lower your sex drive, maybe liberals should find the motivation to do it anyway. Sex under the right circumstances is so dope that it releases dopamine, which is the dopest of brain molecules that makes you feel really good.

In the same Match.com survey, 60 percent of liberals said they are less likely to date a conservative today versus two years ago. The number is pretty high for conservatives too, with a whopping 56 percent who say they’re unlikely to date an anti-Trumper like me.

They DO love perving out to my Instagram pictures though.

So are we headed in the right direction? Should we panic that we’re only dating people who agree with our politics? Well, the answer is mixed.

One one hand, it’s important to hear out the other side and try to reason with them using facts. The problem arises when we can’t even agree on what the facts are. I’ve found myself walking away from debates when the person I’m talking to just won’t acknowledge long-established facts.

But we can learn from people we disagree with politically. Engaging in these conversations made me rethink my position on topics ranging from healthcare in Cuba to minimum wage requirements for small businesses in the U.S.

But when it comes to love, that’s a whole different story. For someone like me, political views aren’t simply shallow opinions - they represent who we are as people and they reveal our character. Supporting a presidential candidate who mocks the disabled, labels Mexicans as rapists and declares that women are pigs - well, sorry, but that’s a real lady boner killer.

I also find it difficult to generate any sexual enthusiasm for anyone who thinks nominating Goldman Sachs bankers and Exxon Mobil CEOs is how you look out for the little guy. That would be a stupid thing to think, and stupid isn’t sexy.

Aside from all of that, Trump reacts to anyone who criticizes him by crying on Twitter like a pathetic man-child. Some of his supporters think this keyboard warrior shows strength when he’s mouthing off on social media. But most women are turned on by real strength, like Justin Trudeau man-handling Trump to avoid getting sucked into his awkward hand tugs.

So sure, try to talk to someone you disagree with if they’re reasonable enough to listen to you in return. But that doesn’t mean you have date or marry them, unless you look forward to a lifetime of psychological warfare.