'This guy is a fraud': Bernie Sanders blasts Trump for selling out voters to help Wall Street 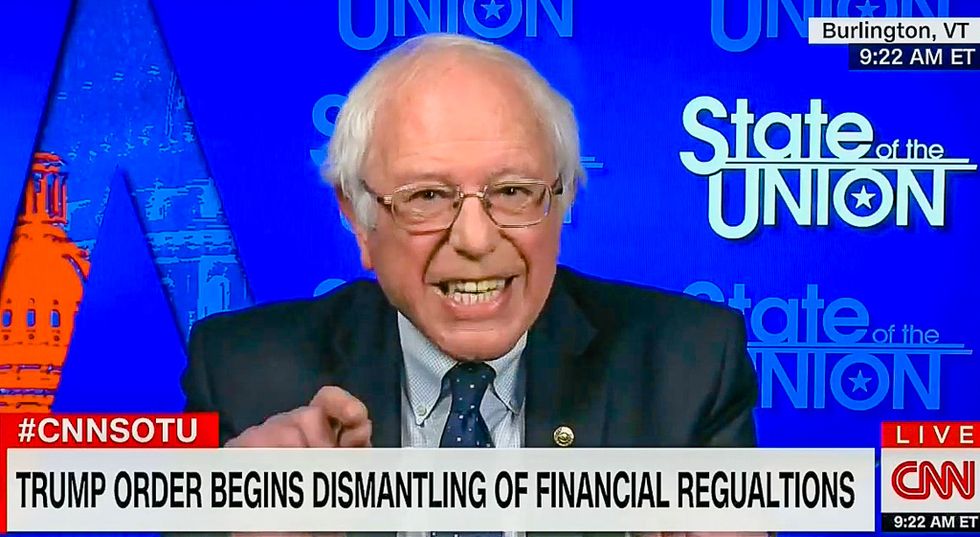 Sen. Bernie Sanders (I-VT) on Sunday accused President Donald Trump of perpetrating a "fraud" on American voters by cozying up to Wall Street bankers instead of keeping his campaign promises.

While meeting with the JPMorgan Chase CEO Jamie Dimon on Friday, Trump railed against Dodd-Frank financial regulations that were put into place after the economic collapse of 2008.

"It is hard not to laugh to see President Trump alongside these Wall Street guys," Sanders told CNN host Jake Tapper on Sunday. "I have to say this, Jake, and I don't mean to be disrespectful. This guy is a fraud."

"This guy ran for president of the United States and said, 'I, Donald Trump, I'm going to take on Wall Street, these guys are getting away with murder.' And then suddenly he appoints all these Wall Street billionaires, his major financial adviser comes from Goldman Sachs and now he's going to dismantle legislation that protects consumers."

The senator admitted that Trump "is a good showman, a good TV guy."

"But I think he's going to sell out the middle class and the working class of this country," Sander said.