'This is bizarre': The internet recoils in horror at Trump's incoherent CPAC rant against 'fake news' 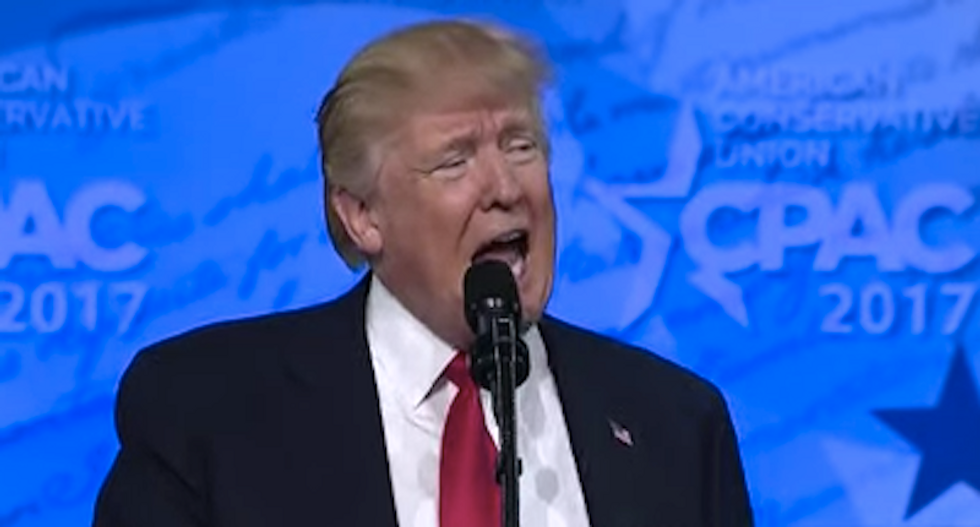 President Donald Trump returned to the Conservative Political Action Conference, where he delivered a rambling speech filled with boasts about his popularity and attacks against the media.

Trump, who for years called NYC gossip pages on background, says people should put their names to their information.
— Maggie Haberman (@Maggie Haberman)1487950158.0

For years, Trump posed as his own pretend publicist—an ‘unnamed source’ to feed stories about himself to NY tabloid… https://t.co/xStqRthorX
— Bradd Jaffy (@Bradd Jaffy)1487951334.0

The forgotten men and women of America are finally getting the war on anonymous sourcing they always craved.
— Jonah Goldberg (@Jonah Goldberg)1487950313.0

It is pretty amazing that Trump seems to have come to CPAC, temple of conservatism, without a prepared speech
— James Astill (@James Astill)1487950635.0

Btw as Trump is railing against the media here at CPAC, the press pen is flanked on all sides by the audience, which points & boos at us
— Benny (@Benny)1487950498.0

At this point the camera folks have just given up trying to find any diversity in Trump's audience at CPAC https://t.co/U79xEWwJGz
— Plunderbund (@Plunderbund)1487950347.0

The president claimed lines to get into his CPAC speech stretched 6 blocks. Per @kasie there are no lines, the event is not open to public
— Dafna Linzer (@Dafna Linzer)1487951607.0

Trump says we're "putting the regulation industry out of business" and "I want regulation" in the same thirty seconds.
— Matt Taibbi (@Matt Taibbi)1487951500.0

What does CPAC want? Much more applause for building the wall than slashing regulations in Trump speech. #CPAC2017
— Sarah Posner (@Sarah Posner)1487951468.0