Van Jones: The US would 'never have a Donald Trump' if Democrats fought mass incarceration 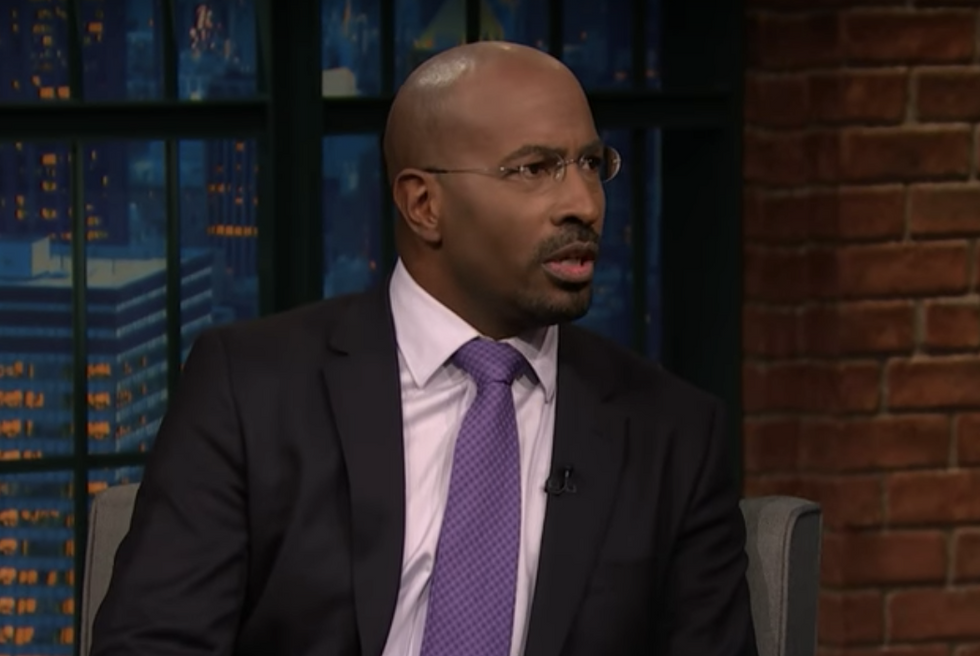 In a new interview with Vanity Fair, CNN's Van Jones argued that mass incarceration in the United States played an important role in President Donald Trump's election victory. Jones explained how the prison system, particularly the incarceration of black Americans at disproportionate rates, had an effect on the election, as the black community has continuously supported the Democratic party.

Using the example of Florida, Jones noted that, "hundreds of thousands of African-Americans [are] permanently barred from voting because they’re convicted felons," adding that if formerly incarcerated people were allowed their voting rights after release, Florida "would be a blue state every time."

A study from the Sentencing Project, a D.C.-based nonprofit that works for criminal justice reform, found that 6.1 million Americans cannot vote in elections due to a felony conviction, adding that 1 in 13 African Americans "has lost their voting rights due to felony disenfranchisement laws, [compared to] 1 in every 56 non-black voters."

Jones explained the importance of "people who are not close to the black community at least [understanding] why there are protests called Black Lives Matter, [and] why there are so many African-Americans in prison."

According to a report from the Sentencing Project that used data from Bureau of Justice, black Americans are incarcerated in state prisons at a 5.1 times the rate of white Americans, and 12 U.S. states have prison populations that are over 50 percent black. Those states include Alabama, Delaware, Georgia, Illinois, Louisiana, Maryland, Michigan, Mississippi, New Jersey, North Carolina, South Carolina, and Virginia.

Vanity Fair also added that black men account for 6.5 percent of the total U.S. population, but make up 40.2 percent of the country's prison population. The Sentencing Project additionally notes a 716 percent increase in the number of women who have been incarcerated since 1980.

Mass incarceration is very much an issue of the Democratic party, specifically because the party pushed measures that expanded incarceration while targeting the African American community. In 1996, the party pushed a series of “three-strikes-you’re-out” policies and approved "$8 billion in new funding to help states build new prison cells."

In more recent years, Democrats have pointed to supporting "prison-to-work programs," and a need to address inequalities in the criminal justice system. However, per the Nation:

[N]either platform made any mention of sentencing reform, or reducing the number of criminal laws, even as the US incarceration rate topped the world and some states reversed course on their “tough-on-crime” policies.

"It’s the black vote, because black people elect Democrats and Democrats enact all of these policies," said Jones. "When you stand back and you let the black community be incarcerated at six times the rate of white people and say it’s ‘not your issue,’ but then you want to cry about the outcome in Florida, it doesn’t make sense."

He added, "If people had stood up against mass incarceration and stood up for people having the right to vote when they get out of prison, you’d never have a Donald Trump."