WATCH: Betsy DeVos quickly gives up and leaves DC school after a couple of protesters block her path 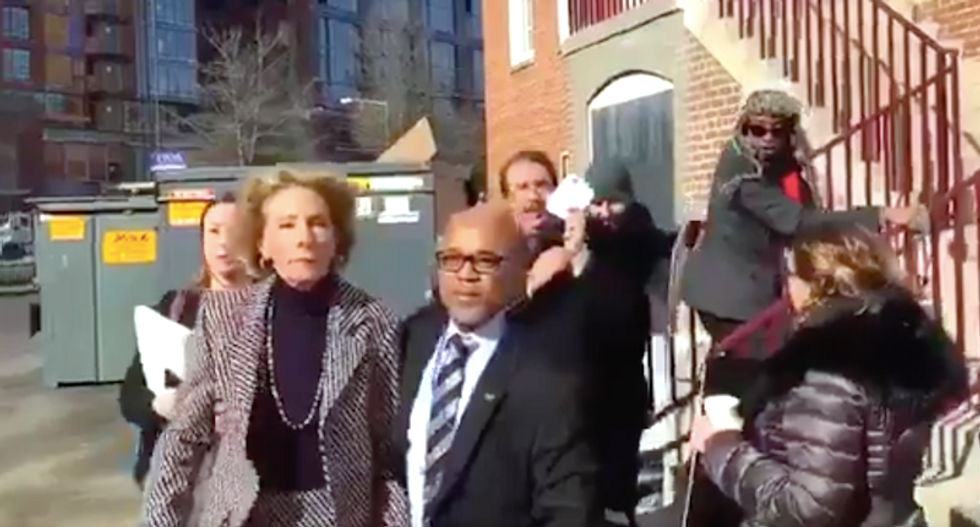 Betsy DeVos quickly gave up and left after she was met by a few protesters outside a Washington, D.C., school.

The newly confirmed education secretary, who prompted a wave of phone calls opposing her nomination, was attempting to visit Jefferson Academy on Friday morning, reported WJLA-TV.

About three dozen protesters greeted her at a side entrance to the school, carrying signs and saying, "You do not represent anything that they stand for."

Two men stood alongside a stairway and created a barrier with their arms by gripping the opposite railing, and DeVos and a man accompanying her briefly tried to pass but then turned around and left.

"Giving money to senators and buying your way into the position, you should be so proud of yourself," one of the men says, as he leaves the stairway and jogs past DeVos and her companion.

"Jimmy, let's put her in the car," the secretary's companion says, and DeVos is escorted into a waiting town car.

The man who blocked her path and then jeered DeVos bellows "shame, shame" as the pair get into the vehicle, and he then briefly blocks the SUV's path as they leave school grounds.

The visit was organized by the local teachers union, which did not support DeVos but hoped to build a relationship with the top public education official.