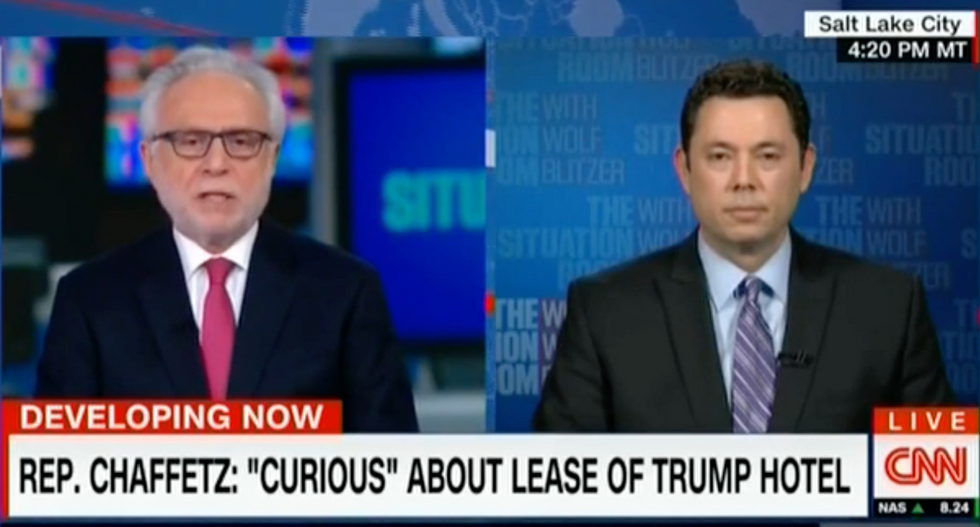 CNN’s Wolf Blitzer on Wednesday hammered House Oversight Committee Chairman Jason Chaffetz over Donald Trump’s potential conflicts of interest, at one point reminding the Republican leader that his responsibility is to serve as a check-and-balance for the president.

Chaffetz responded to a question about conflicts inherent in the president’s sprawling business empire by insisting, “the president is exempt from conflicts of interest, so it’s kind of a non-issue,” adding Trump has promised to “wall … off” his business interests while president.

“What about the emolument clause of the U.S. Constitution,” Blitzer asked, referring to a clause some Constitutional scholars interpret to mean Trump is forbidden from taking any money from a foreign state.

“I know it’s surprising and frustrating to Democrats, but the president is exempt from these conflicts of interest,” Chaffetz repeated.

“But he’s not exempt from the emoluments clause, is he?” Blitzer pressed.

Chaffetz argued he refused to go on a “fishing expedition that the Democrats want us to go into,” adding the public understood what they were getting into when the “overwhelmingly” elected Trump into office.

“You’re the chairman of this Oversight Committee that’s looking at the executive branch of the U.S. government,” Blitzer reminded Chaffetz, adding “the President of the United States potentially could be in violation of the U.S. Constitution.”

Chaffetz argued that he never “did this type of investigation on Barack Obama, I never did it on Hillary Clinton,” adding there’s “nothing to suggest that [Trump] is profiteering in an unordinary way from the fact that he’s President of the United States.”

The House Oversight Committee chairman said he would probe any conflict that “rises to the surface.”

“I’m just not going to go on a fishing expedition,” he said before explaining what he believes to be the driving force behind concerns about Trump’s potential conflicts-of-interest.

“It’s Democrats with their heads exploding wanting to see this because they cant believe that Donald Trump is actually president of the United States,” Chaffetz opined, adding, “I know what their motivation is.”

“I think we’re going to leave it on that note,” Blitzer replied. “But I just want to point out that your committee is designed to be a sort of check and balance on the executive branch. The Oversight Committee, that’s what it’s called.”