'What kind of White House is this?': Robert Reich eviscerates the 'leaderless' Trump administration 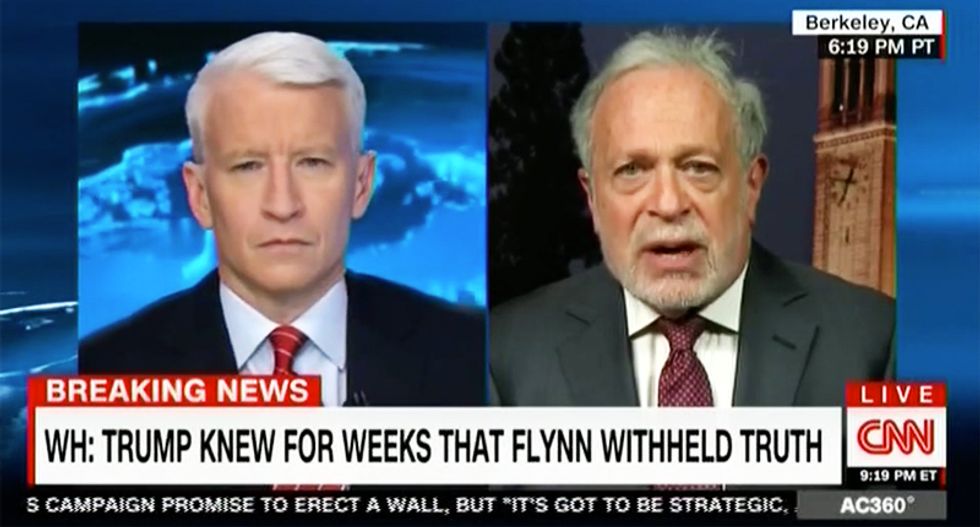 Former Clinton-era Labor Secretary Robert Reich handed down a brutal indictment of the Trump White House on Tuesday night, wondering if anyone knows who is in charge as they move from crisis to crisis.

Speaking with CNN host Anderson Cooper, Reich said all new presidential administrations go through growing pains, but said nothing comes close to the "chaos" going on in the White House right now.

'I've never seen the chaos that I have seen and witnessed in the Trump White House," Reich said. "You have an executive order, a travel ban going out, without any coordination with any other agency, creating absolute uncertainty. I mean wild, wild uncertainty among the people who are supposed to be enforcing it."

"You've got a chief of staff who doesn't even know how exactly to run a White House," he continued. "You've got Kellyanne Conway, who is out there promoting Ivanka's products. Sean Spicer is a late-night comedy joke. You've got leaks and back biting. It's not clear what is going on, who's in charge."

"The National Security Agency doesn't want to brief the White House for fear that it is all compromised," he exclaimed. "Even the Situation Room is compromised with regard to Russia. What kind of a White House is this anyway? Donald Trump was elected on the premise that he would actually be cleaning up, not only the swamp in Washington, but would be applying tough business practices to management. Well, this is actually the sloppiest management I frankly have ever seen."