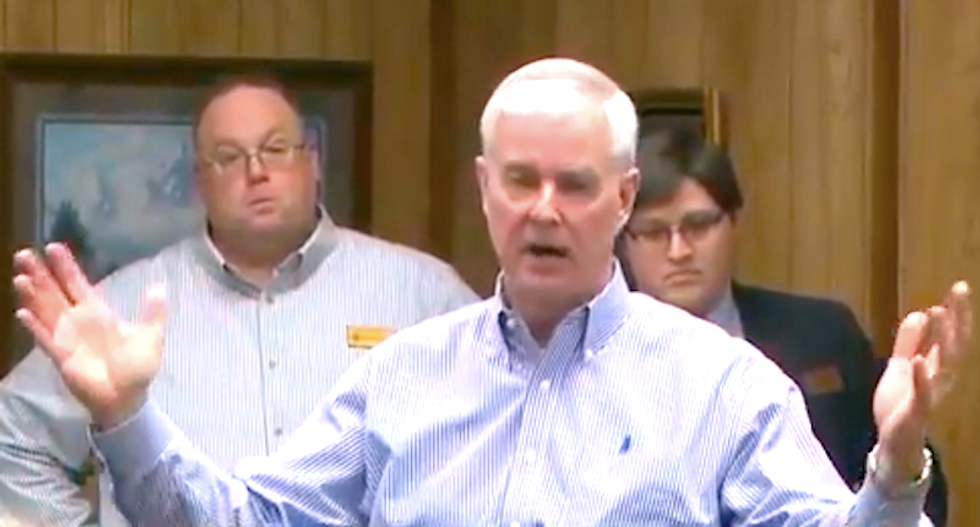 An Arkansas Republican lawmaker dismissed calls to investigate President Donald Trump -- and he got an earful from an angry constituent.

Rep. Steve Womack (R-AR) hosted a "coffee with the congressman" event Tuesday morning at the West Fork City Hall, where more than 150 people packed the room to air their concerns, reported KHBS-TV.

An even larger crowd gathered outside, and they wondered why Womack couldn't have rescheduled the event at a larger venue or simply stepped outside to address them.

Voters asked about health care, the environment and the anti-science worldview held by so many legislators, and Womack said Republicans had been elected to roll back government regulations that he argued had killed job growth.

"I know you disagree with some of this stuff, but over eight years you have choked this economy with so many regulations," Womack said, as the crowd jeered and reminded the lawmaker that the economy was doing well and unemployment was low.

Voters brought up their concerns about alleged Russian hacking of the U.S. election, and Womack agreed the nation posed "an existential threat" and objected to the types of "outside deals" with the Kremlin reportedly pursued by some Trump advisers.

"At the end of the day, you and I agree that Russia is a threat, and I believe that once we get the president with his people assembled around him, he will better recognize that Russia is part of the problem," Womack said to jeers from the crowd.

A man in the crowd asked Womack to answer yes or no whether he'd support a probe of the Trump administration's ties to Russia, and the lawmaker said he didn't want multiple "rogue" investigations possibly revealing classified information.

"You guys just want to investigate everybody," Womack said, and was quickly drowned in boos.

Several people in the crowd reminded Womack of the lengthy GOP probes of the Benghazi attacks, and one man shouted out above the noise.

"You guys wasted a lot of money on Benghazi, waste a little on Trump," he said, to extended cheers.

After the event, Womack suggested he was ambushed by protesters from outside his district.

"I'm sorry to the community that it became somewhat one-sided and not necessarily a lynch mob, but at least an angry mob that was just not going to be happy with anything I said, and it took away from the ability for us to have what I believe we need to have, and that's a good, adult-level discussion" Womack said.

Watch video of the entire event posted online by KHBS-TV.

. @rep_stevewomack: "You guys want to investigate everybody"

Crowd: "You guys wasted a lot of money on Benghazi, waste a little on Trump!!" pic.twitter.com/V1SDAYcv80