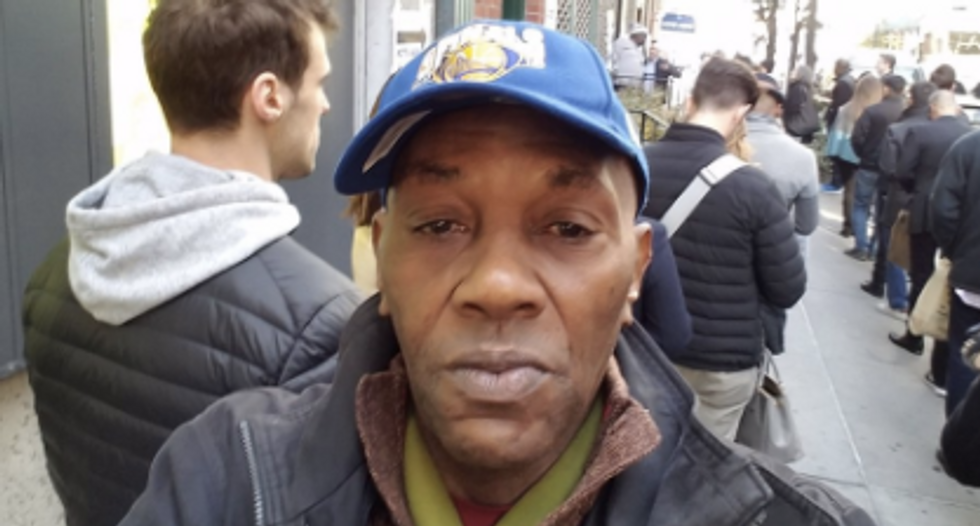 Timothy Caughman was killed for being Black. He was 66.

A canner, who supported himself by gathering and redeeming bottles and cans, Caughman was doing his job–sorting through recycling–when a 28-year- old army veteran, James Harris Jackson, pulled out a 26-inch mini-sword and repeatedly stabbed him in the chest and back Monday night in Manhattan's Hell's kitchen neighborhood. Caughman died at a hospital.

Wednesday, Jackson turned himself in, telling police that he traveled from Maryland to New York City on Friday in order to "target male blacks," according to Assistant Chief William Aubry of Manhattan South Detectives. "The reason why he picked New York," said Aubry, "is because it is the media capital of the world... He wanted to make a statement.” The New York Post reports that "Jackson identifies as a white supremacist and told police he penned a manifesto about his racist views," which included a plan “about an imminent attack on blacks in New York.” He was particularly disturbed by Black men who were in romantic relationships with white women.

So, to recap, a self-identified white supremacist fatally stabbed an unarmed man because he was Black.

Yet, much of the mainstream media coverage has turned a story about the murder of an unarmed Black men into an investigation into the character of an unarmed Black man, as Adam Johnson points out at FAIR. The Daily News and New York Post reported on Caughman's utterly unrelated and irrelevant arrest record. Even more remarkably, The Daily News thought it was appropriate to remind readers that, "In December 2014, Ismaaiyl Brinsley traveled to the city from Baltimore and assassinated Police Officers Wenjian Liu and Rafael Ramos, who were in the car near Myrtle and Tompkins Avenues in Bedford-Stuyvesant. Brinsley had made anti-police statements on social media prior to the murders." Though tragic, a murder that took place over two years ago doesn't seem germane. Johnson suggests,

This is a bizarre journalistic choice that appears to be some kind of attempt at “balancing” the coverage, suggesting that there could be a bit of score-settling going on: Yes, this black man was senselessly murdered by a white supremacist, but some other black guy killed cops two-and-a-half years ago, so….

To be fair, there is another angle here. Both crimes were committed by men who traveled from the state of Maryland to New York City. So there's that.

Another important thing, according to the Daily News and New York Post, is that Caughman lived in transitional housing.

This isn't the first time the media has tasked itself with scrutinizing and smearing the character of an unarmed Black murder victim. See: Michael "no angel" Brown, Freddie "he caused his own injuries (which he didn't)" Gray, Trayvon "he smoked pot once and gave the middle finger in a photo once" Martin. The punishment for having once smoked pot is not, actually, execution at the hands of someone who failed the police entrance exam, beats his girlfriends and volunteers as a neighborhood watchman.

Curiously, the same media which is so quick to the judge victims, finds itself capable of extraordinary empathy and understanding when the perpetrator is white. Consider, for example, the story of Brock Turner, who was sentenced to six months (of which he'd serve three) for assault with intent to rape an intoxicated woman and sexually penetrating an unconscious person with a foreign object. While some were disturbed by the rape and the light sentence, The Washington Post, worried that Turner's promising swimming career would be disrupted by the conviction. The article, whose headline read, "All-American swimmer found guilty of sexually assaulting unconscious woman on Stanford campus," featured a fresh-faced posed photo of Turner, not the traditional mugshot.  and not his mug shot.

Caughman happened to be a collector of autographs, a passionate consumer of pop culture and a huge fan of Shari Headley, so outlets have also picked up the human interest angle of the story, which, though preferable, still manages to incorporate the irrelevant information from the smear-based reports. Even an additional article in The Daily News, whose headline reads, "New Yorker who was fatally stabbed by Maryland man loved meeting Hollywood stars," includes the fact that he lived in transitional housing. Because so little information has been released about Caughman, even places like The Hollywood Reporter, included this irrelevant tidbit in its seemingly harmless listicle: "Timothy Caughman Stabbed To Death: 5 Things About The Innocent NYC Man." The fourth thing you need to know, apparently, is that Caughman,

At least Bustle focuses on the positive in its meta piece promising that "The New Yorker's Sense Of Optimism Won't Be Forgotten."

But there is another story to be found in Caughman's biography. I first heard about Caughman when Benjamin Dixon, the host of the Benjamin Dixon Show, shared a selfie Caughman had posted of himself at 9:30 A.M. this past election day. It read, "Standing on line waiting to vote I love america."  Dixon added his own comment: "Wow. Timothy Caughman. Murdered by a white supremacist who specifically targeted black men." 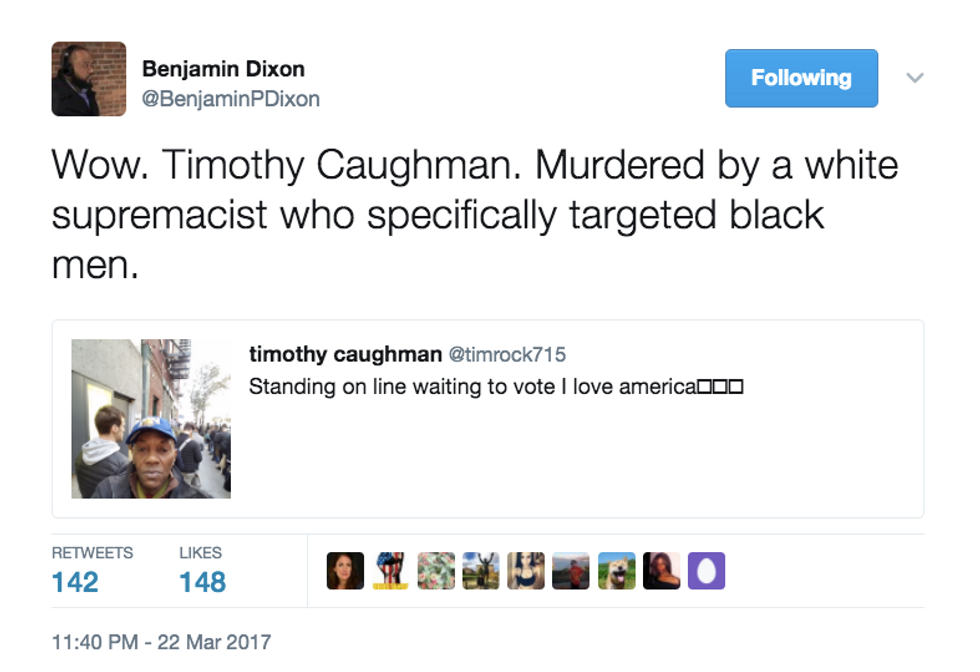 There is something haunting and heartbreaking about Caughman's love for a country that failed to protect him and so many others. And his tweets reveal that he was more than just a man with an arrest record, who lived in transitional housing, was crazy for autographs, and was killed by a man who traveled from Maryland to New York, which is the same trajectory made by another man in December 2014, by the way. He was someone cared deeply about politics and the world around him, about Black history and pop culture. And he warned against the very things that contributed to his own death: racism, a "fear of blackness" and even the rise in hate crimes that followed Donald Trump's election.

1. Three days after the election, he tweeted out that "hate crime reports surge in US after Trump win." 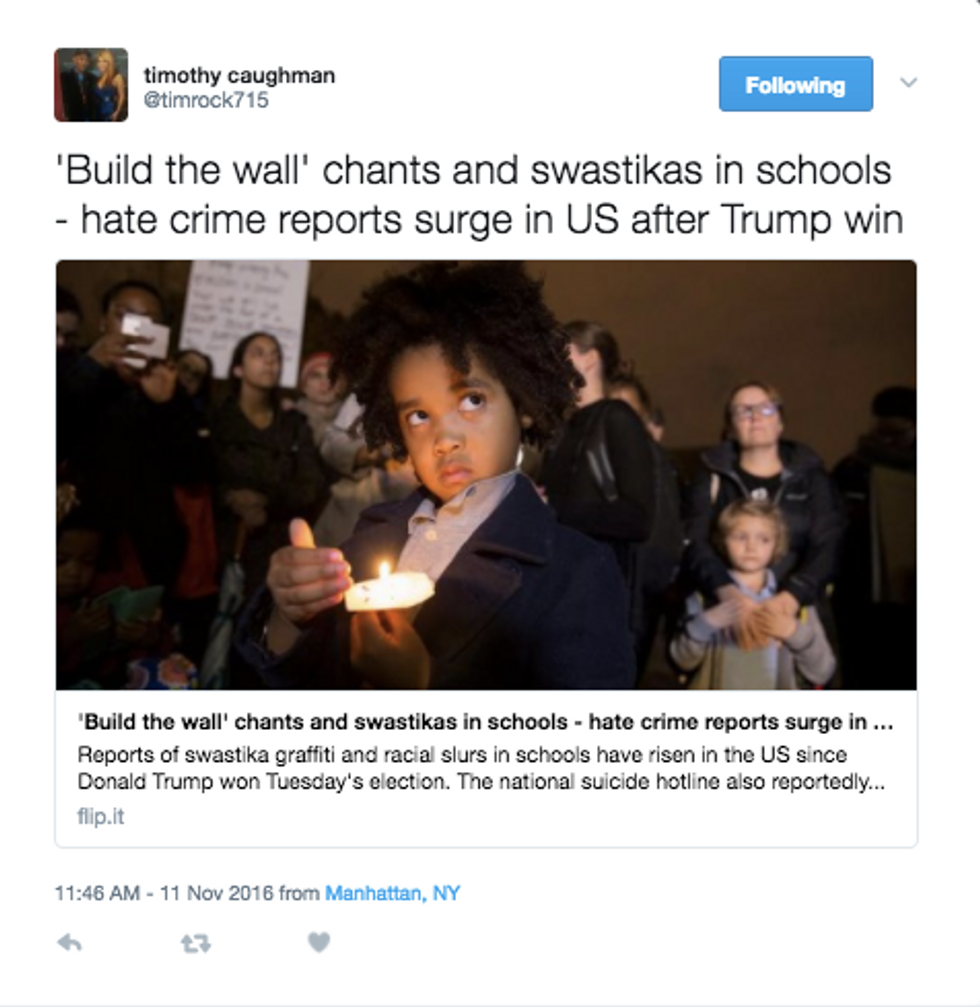 2. After Caughman tweeted his Election-Day selfie, the voter protection coalition Election Protection, tweeted out instructions and a hotline, which Caughman Retweeted right away. 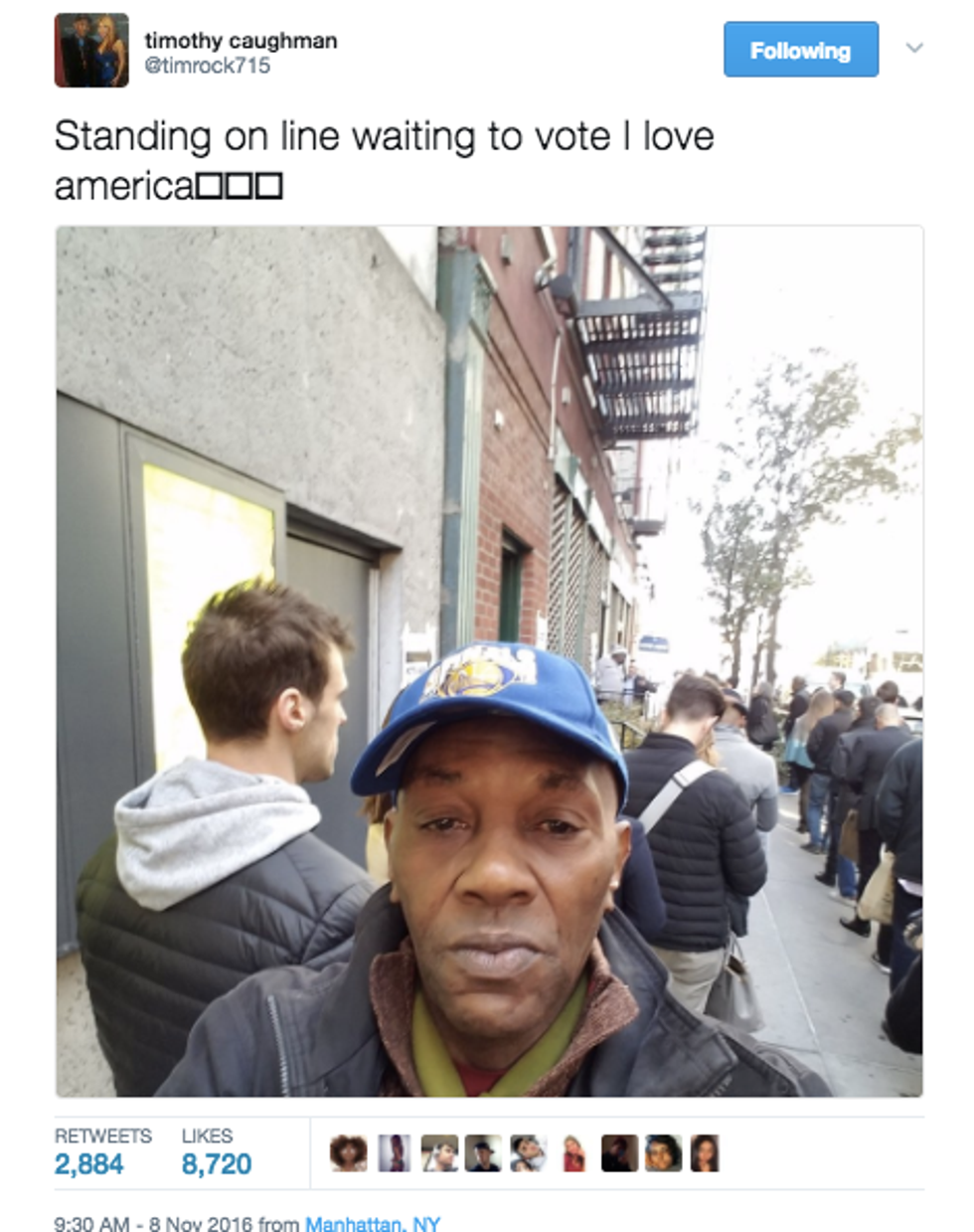 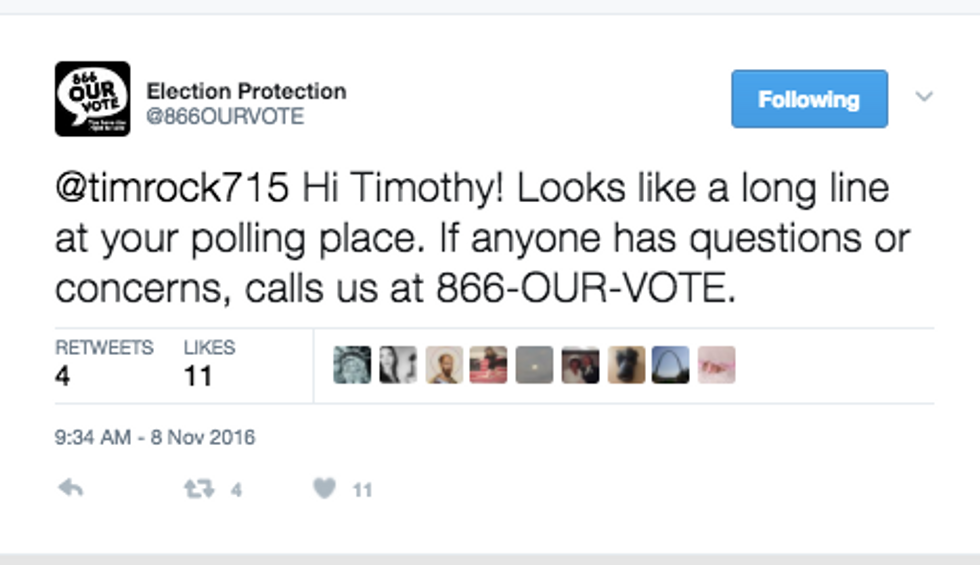 3. That evening, Caughman showed off his election stamp. 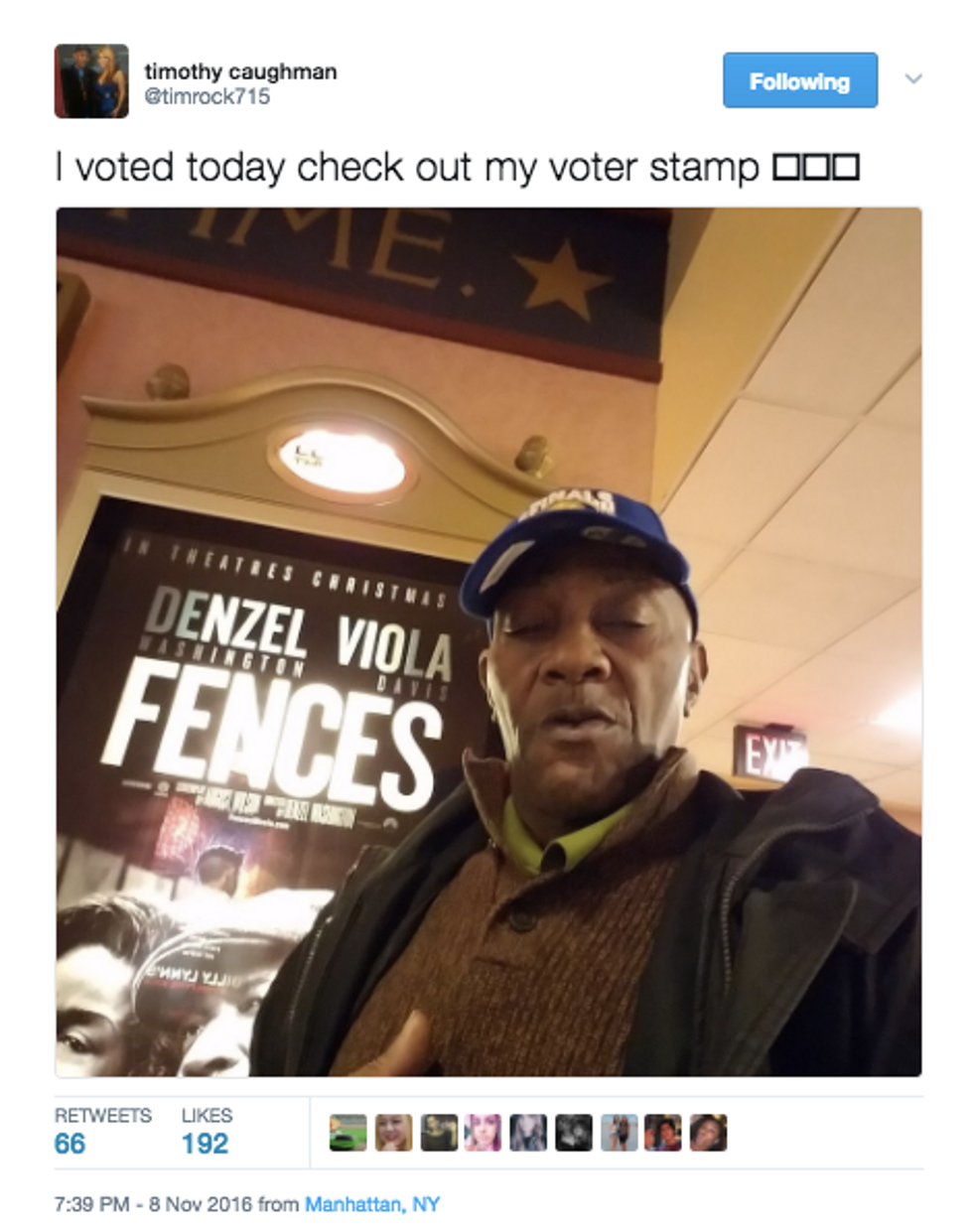 4. He had been a supporter of Hillary Clinton. 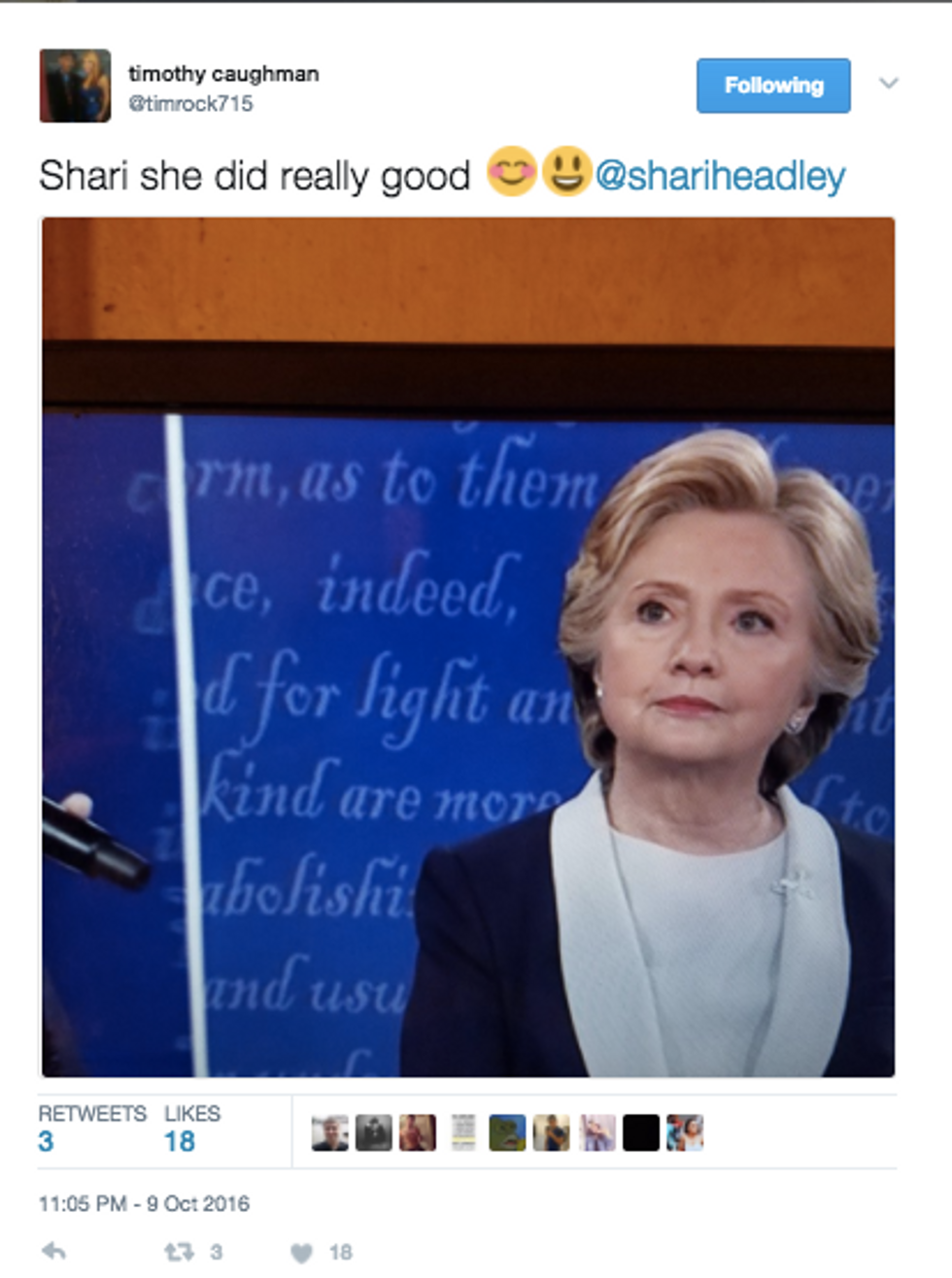 5. And was not a fan of Donald Trump. 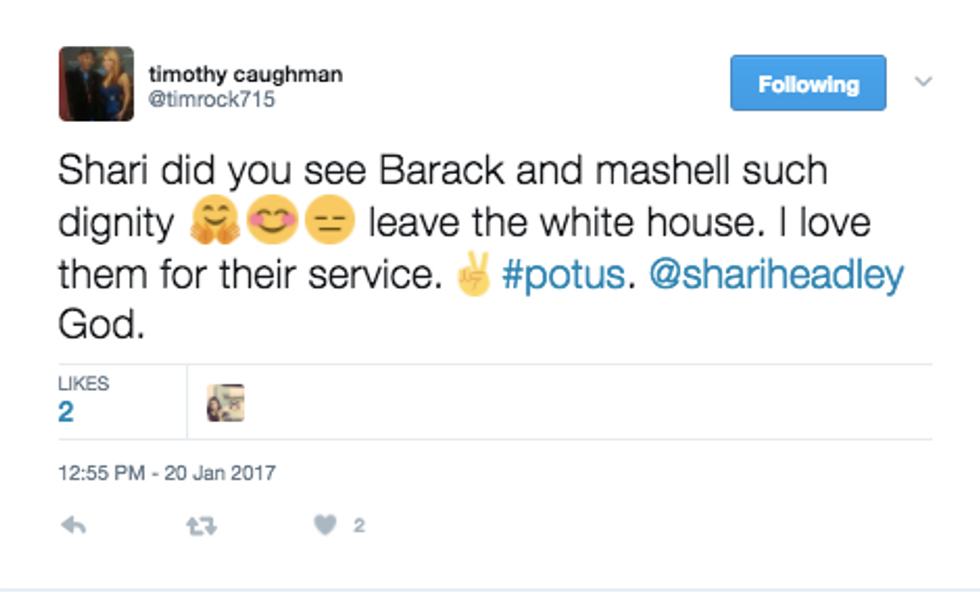 7. Whom he wanted to pardon Black Nationalist and Pan-Africanist Marcus Garvey 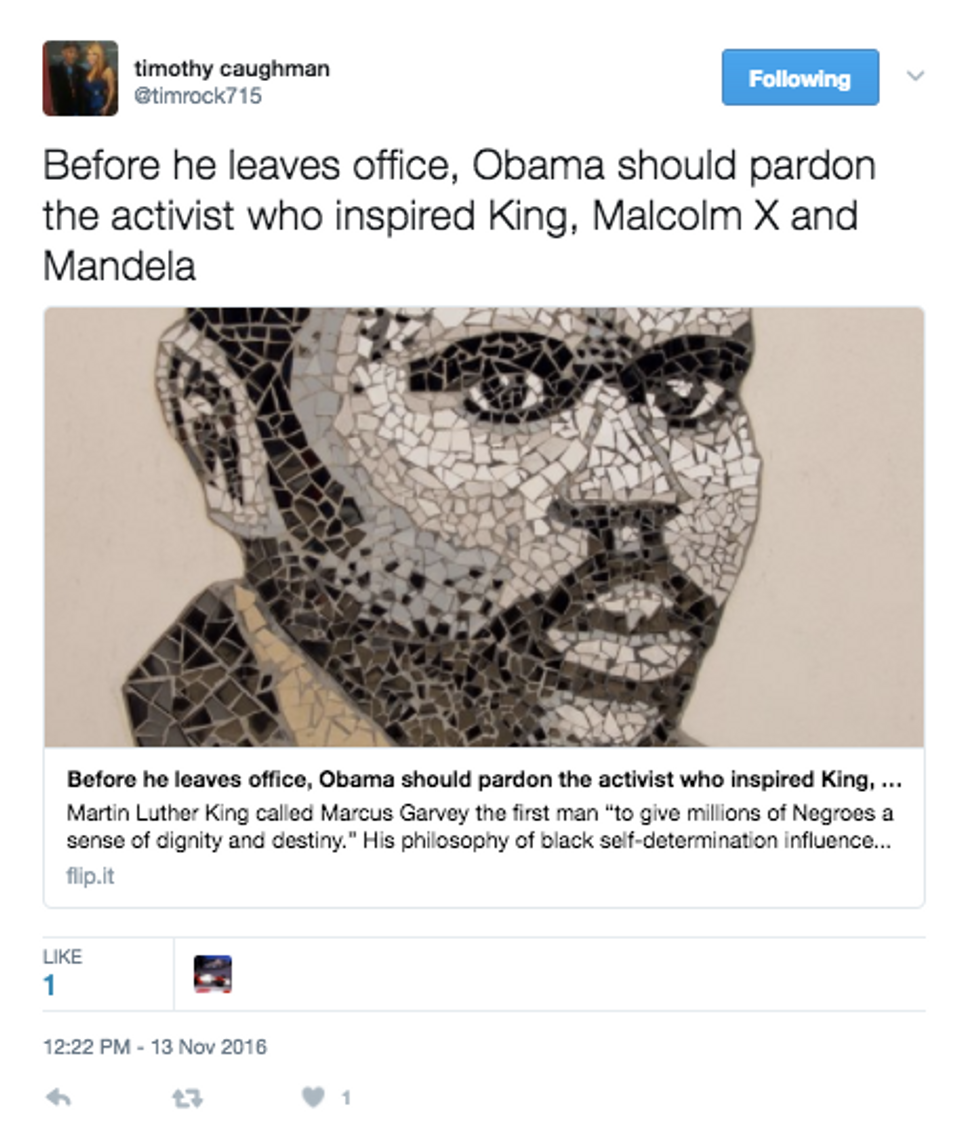 8. He also tweeted about Angela Davis 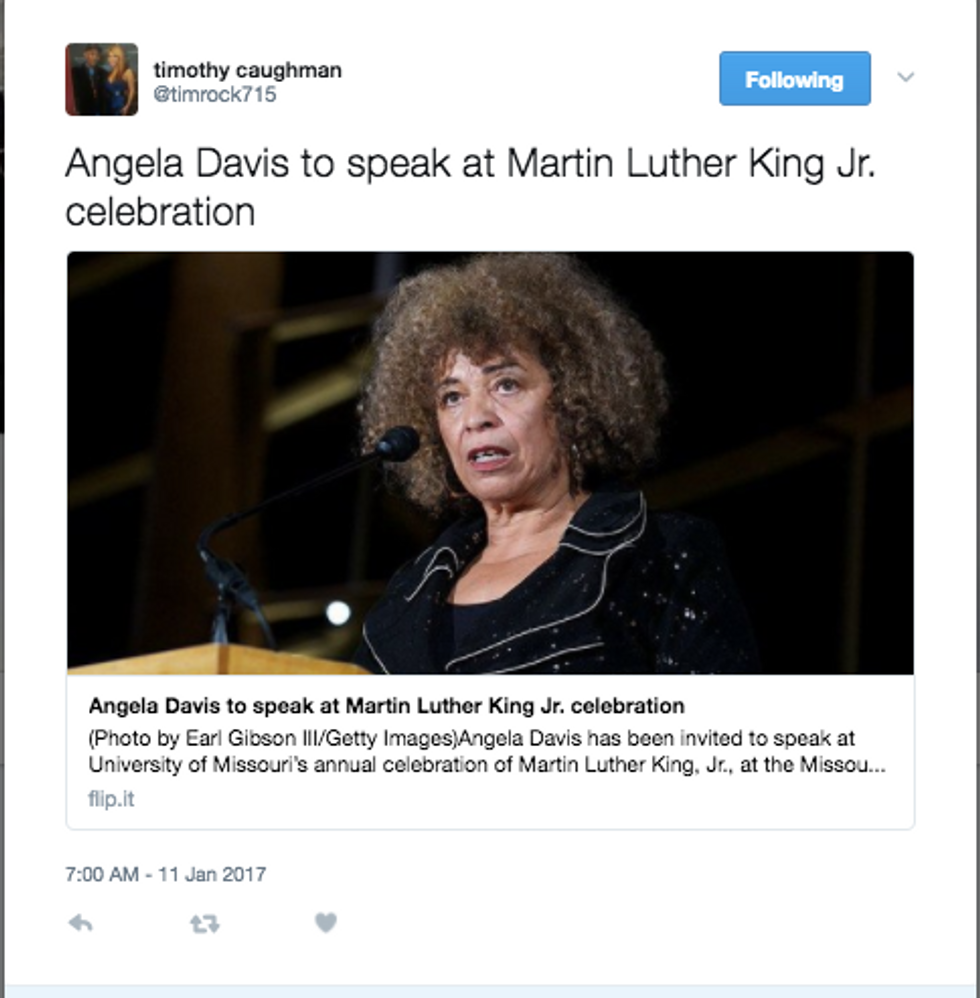 10. And an art exhibit called "Orange is the New Black," highlighting racism in the U.S. 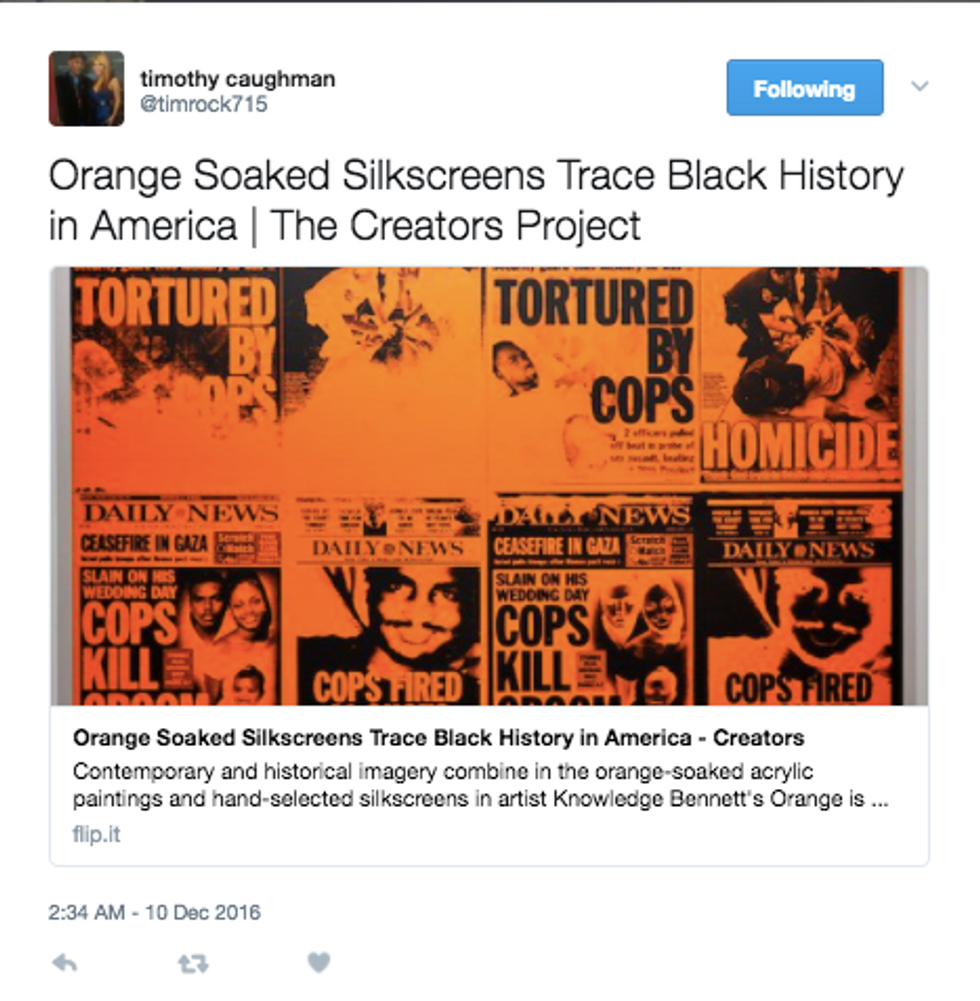 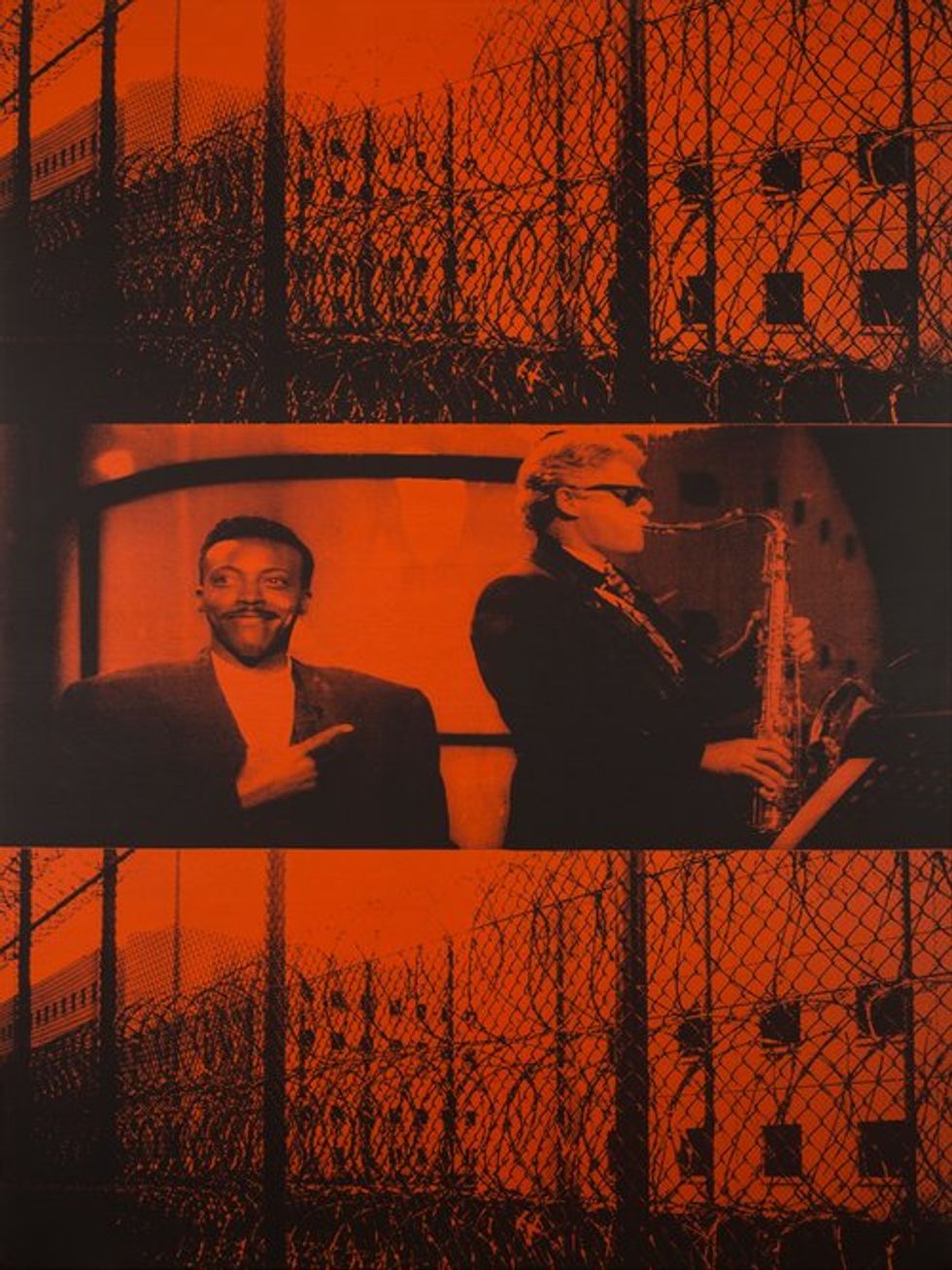 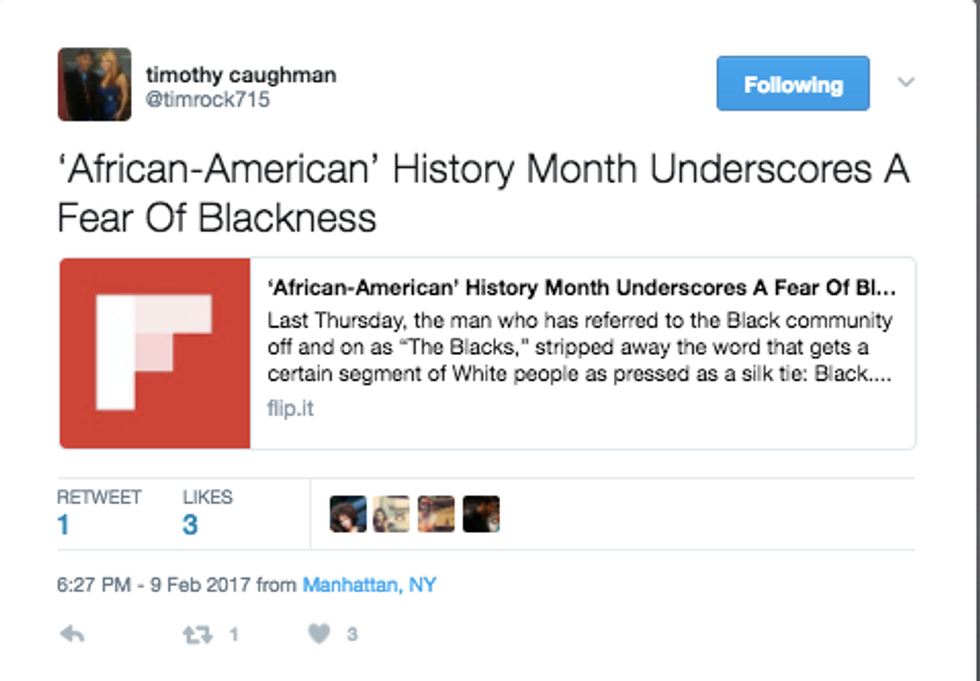