Alternative facts: Here are the 5 most unhinged conspiracy theories pushed at a GOP mega-donors' climate conference 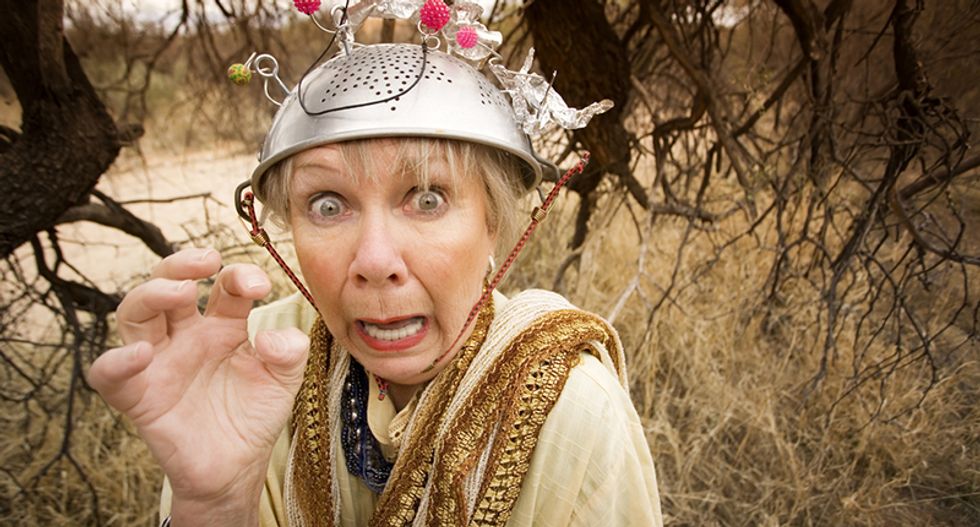 Before President Trump even approved the Keystone Pipeline, GOP mega-donors Robert Mercer and Rebekah Mercer were already celebrating with a two-day anti-climate conference sponsored by the conservative Heartland Institute. Among the speakers was British climate denialist Lord Christopher Monckton, who spoke fervently about convincing "illiberals" from Ivanka Trump to Al Gore that climate change is a hoax.

Here are five of his most bizarre theories.

1. The 97 percent 'consensus' that humans are causing climate change is the result of communist influence.

"There isn't a consensus," Monckton told the audience. "The people who did the survey reported it as 97 percent because they were communists and they didn't care about the truth."

2. A tight-knit crew of Romanian intelligence veteterans have taken over the world's leading mainstream media sources.

Monckton's war against Pacepa's disinformation will only be won by forcing Republican Chief Justice Roberts (who has handled many high-profile media cases) to resign.

3. 'Fake news merchants' like Arnold Schwarzenegger can be taken down by boycotting Google.

Monckton is no fan of the Terminator's warnings about pollution, and has called for his ATTN video to be deleted.

4. An eight-year-old bill that was never voted on is key to bringing down two blue-state congress members.

The Waxman-Markey Bill (American Clean Energy and Security Act), introduced by Reps Henry A. Waxman (D-CA) and Edward J. Markey (D-MA), is a sore spot for Monckton, despite over 1,000 climate bills having been introduced by Democrats since.

"I have elevated [Waxman and Markey] to the peerage because that means they will have no further influence on politics at all," said Monckton.

5. Secretary of State Rex Tillerson is part of the resistance.

Despite Exxon's aggressive funding of climate denial for decades, Monckton insisted its former chief executive officer, now Secretary of State, is "at best equivocal on the climate question."

"My spies inside the administration, who are numerous and devoted, have told me that [Tillerson] is one of the chief foci of resistance to Mr. Trump honoring a promise that he wishes to honor, which is to withdraw forthwith not only from the Paris Climate Agreement but also from the UNFCC (United Nations Framework Convention on Climate Change)," he said.