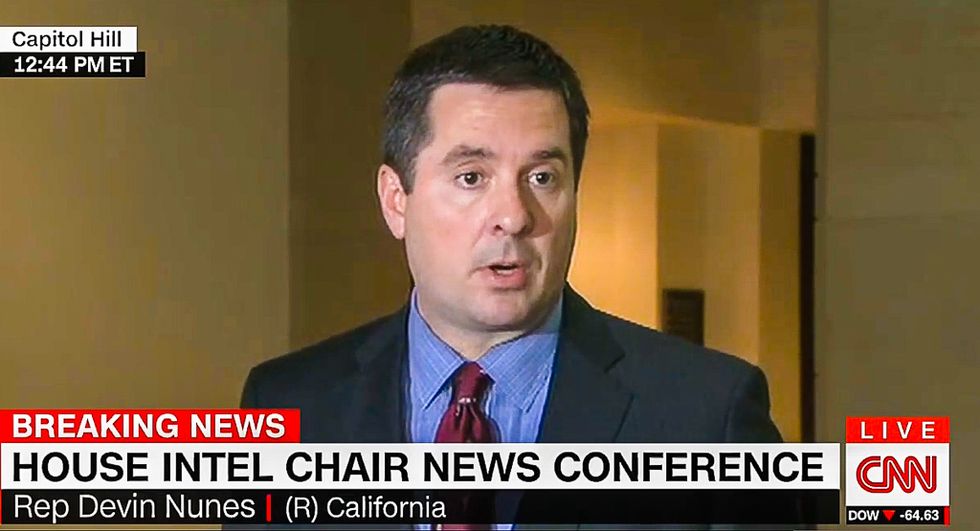 Rep. Devin Nunes (R-CA), chairman of the United States House Permanent Select Committee on Intelligence, warned reporters on Thursday that they could find themselves under investigation if they continued to ask questions about Attorney General Jeff Sessions' ties to Russia.

During a press conference, Nunes dismissed calls for his committee to investigate Sessions following reports that the Attorney General may have lied to the Senate Judiciary Committee when he said that he had no contact with the Russian government during the 2016 campaign.

"I read about this in the newspaper and I see some of you talking about," Nunes told reporters. "If you have those names [of anonymous sources], if you want to come forward as a whistleblower and bring those to us, we would greatly appreciate it. Because we would like to have those names, bring those people in."

Nunes noted that former National Security Adviser Michael Flynn had been a private citizen when he contacted the Russian ambassador and then lied about it.

"Look, I'm sure some of you are in contact with the Russian embassies," the congressman said ominously. "So be careful what you ask for here because if we start getting transcripts of any of you or other Americans talking to the press then do you want us to conduct an investigation on you or other Americans because you were talking to the Russian Embassy."

"I just think we need to be careful."

Nunes, who served as a member of Trump's transition team, later denied that his comment was intended to threaten reporters with investigation.

"I was saying the opposite and warning against engaging in witch-hunts," he tweeted Thursday afternoon.

(Note: This article and headline was updated to include Devin Nunes' clarification of his earlier comments.)