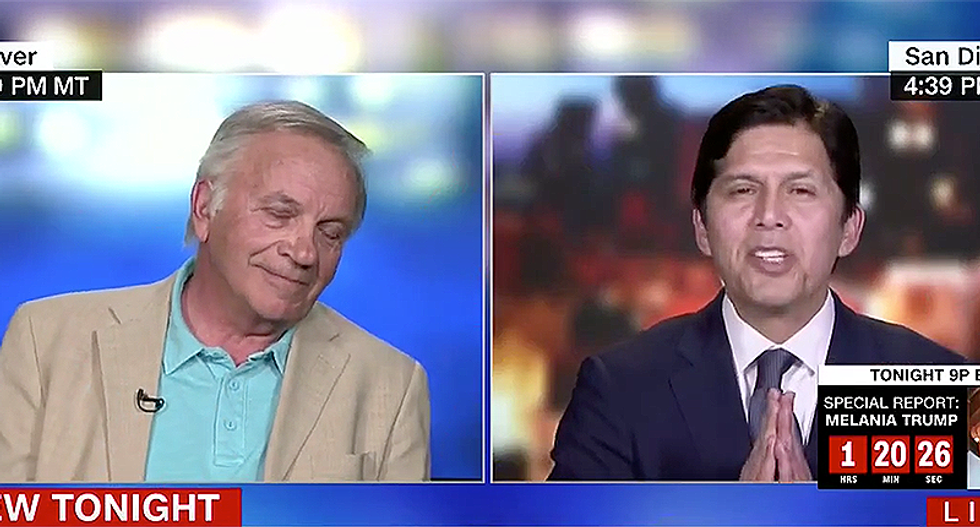 Following a segment with a young undocumented immigrant who falls under DACA rules, de León joined a panel on Erin Burnett "Out Front" and spoke of the sensitivity needed when dealing with children brought to the United States. Deporting them out of the blue is "heartless" and "cruel," he explained. When talking about a man that has been in the U.S. for 20 years, de León said that the man was the result of failed policies by Tancredo. Tancredo spoke out against former President George W. Bush, who sought to pass his own version of immigration reform that would work with those in the U.S. currently.

Tancredo disagreed claiming that the youngsters broke the law when they were brought here and that they probably haven't paid taxes.

"That's right! They're not!" Tancredo cut in.

De León explained that the administration "of course" is saying they're not targeting those that aren't hardened criminals, but there's evidence to the contrary.

That's when Tancredo began a filibuster, railing that he was glad he could stop Bush's attempts at passing immigration reform and encouraged CNN begin telling stories of "legal immigrants." Burnett tried to cut in but Tancredo talked over her. She tried to allow de León to have the last word but Tancredo refused to stop talking.

"Tom, if you could calm down just a tad bit," de León asked.

Burnett had to cut in and ask that Tancredo stop talking. When de León tried to speak, however, Tancredo cut in and talked over him.

"Tom, if you're going to calm down a little bit so I can get a few words," de León tried to speak. Tancredo refused to quiet himself. "Tom, I'm going to ask, please control yourself just for a quick second," he tried again.