Conservative pundit: The only president with a worse 100 days than Trump is the one who died the first month 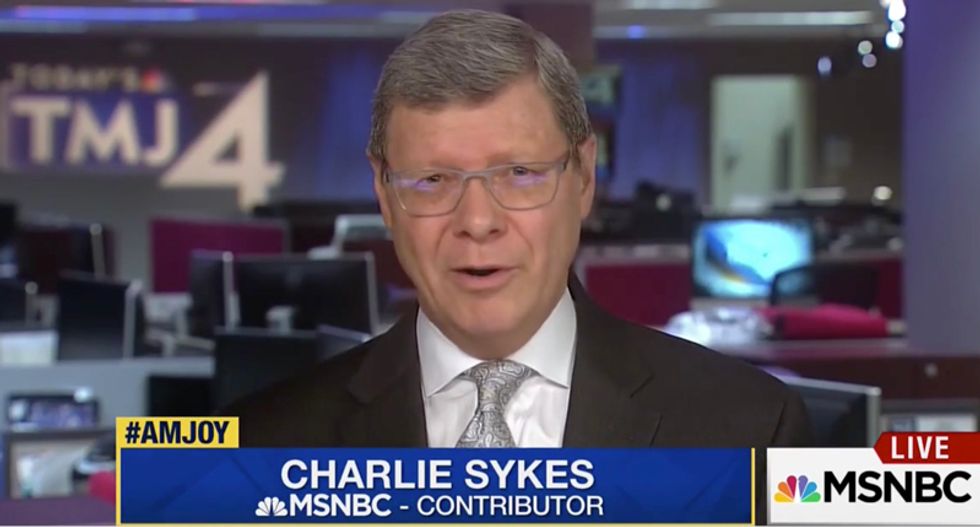 On MSNBC Sunday morning a conservative radio host took multiple shots at President Donald Trump's faltering relationship with his own party, saying the first two months of his administration have been a disaster.

Appearing on AM Joy, commentator Charlie Sykes was asked by fill-in host Jonathan Capehart how things are going for Trump within his own party.

"Does it make much sense for the president to wage this all-out war, all-out battle on fellow Republicans, moderates and conservatives," Capehart asked. "What have you, what's he's got, what is this, day 65? He's got three and a half more years?"

"Yeah, so far the only president who had a worse 100 first days would be William Henry Harrison who didn't last past 30 days," Sykes quipped to laughter from the panel.

"This is what is so dangerous for the Republican governing majority at this point," Sykes continued. "You had this disaster on Friday. The president made it really clear he didn't care that much, he wasn't engaged, he wasn't passionate, he never bothered to learn the details of the [health care] bill."

"Now by outsourcing the attacks and allowing the long knives to come out, I think he puts his entire agenda at risk unless somehow in some alternative universe Chuck Schumer is going to come forward and say, 'Let's work together, let's pass this huge infrastructure bill,' which will, of course, further tear apart the Republican majority, will further tear apart conservative support."

"So I'm not sure that you're seeing as much of a strategy as you're seeing the president's lack of impulse control. The normal instinct to lash out at people who didn't bow the knee," Sykes lamented.