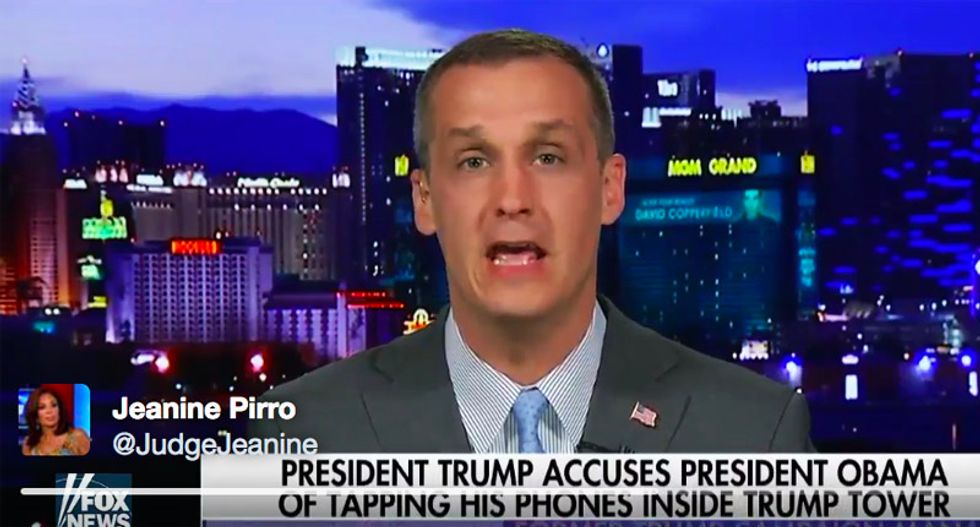 Appearing on on Fox News’ Justice with Judge Jeanine, the former Trump aide turned lobbyist doubled down on President Trump's accusation that Obama had the phones at Trump Tower tapped prior to the election, stating that Sessions was also placed under surveillance.

Like Trump, Lewandowski was long on accusations but short on evidence.

“They did spend time listening to conversations between then-Senator Jeff Sessions and the ambassador to Russia while he was in his Senate office,” Lewandowski told host Jeanine Pirro. “If that were to take place -- which supposedly did take place -- what other conversations did they listen in on from the American public?”

Lewandowski appeared to be doubling down on the attacks on Obama at a time when the embattled Sessions is reeling after being accused of lying about contacts with the Russian government during his confirmation hearings.

Calling it "very concerning," Lewandowski added, "Is it possible that that previous administration was listening to the conversations that took place in Trump Tower from their political opponents? If that is the case, and what Donald Trump alludes to is accurate, then that’s very, very disturbing for our future going forward.”

Here's the vid—Lewandowski just said the feds eavesdropped on an office meeting btwn Sessions and the Russian Amb. pic.twitter.com/7cU8zobTYg

Fleeing law enforcement might work in the movies, but it won't work for the parents of alleged Oxford, Michigan school shooter Ethan Crumbley's, according to former senior FBI official Chuck Rosenberg.

"First of all, these parents have apparently made lots of bad decisions in raising their children," Rosenberg told MSNBC on Friday. "It's not surprising they would make another really bad decision by trying to run."