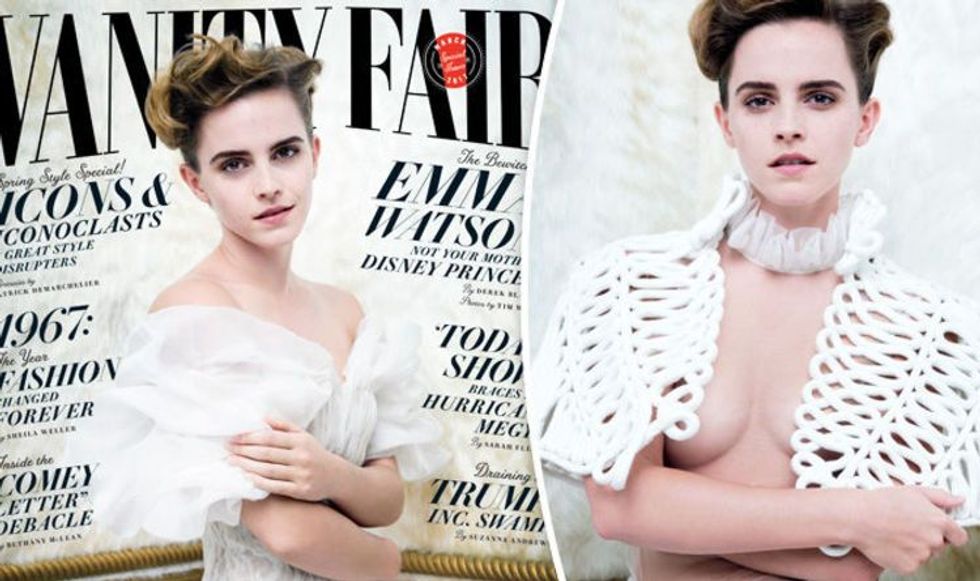 Emma Watson's Vanity Fair photoshoot has been criticized for being too salacious for someone who considers herself a feminist.

Emma Watson’s latest photoshoot for Vanity Fair sparked an unexpected debate about nudity and feminism. Can women display underboob and still consider themselves warriors in the fight for women’s equality?

Watson’s Vanity Fair shoot featured an artsy photo of the star wearing a white crocheted bolero jacket without a shirt underneath. While you can’t see any nip action, there is a lot of cleavage and underboob visible.

The photo led to a fair amount of criticism from commentators like Julia Hartley-Brewer, who tweeted, alongside the picture: “Emma Watson: Feminism, feminism... gender wage gap... why oh why am I not taken seriously... feminism... oh, and here are my t- -s!"

But the Beauty and the Beast actress certainly does consider herself a feminist and explained that feminism is all about allowing women to make their own choices.

“It just always reveals to me how many misconceptions and what a misunderstanding there is about what feminism is,” said Watson. “Feminism is about giving women choice. Feminism is not a stick with which to beat other women with. It’s about freedom, it’s about liberation, it’s about equality.”

It’s important to point out that Watson didn’t have the same line of reasoning during her 2014 interview with Wonderland Magazine where she made some judgy statements about Beyonce’s salacious music videos.

“As I was watching [the videos] I felt very conflicted, I felt her message felt very conflicted in the sense that on the one hand she is putting herself in a category of a feminist, but then the camera, it felt very male, such a male voyeuristic experience of her,” Watson was quoted as saying.

So which is it? Is female nudity in line with women’s empowerment, or does it feed into over-sexualization? I think Watson screwed up and had a hypocritical moment because a lot of us who fight for gender equality have wavering positions and fuzzy reasoning.

There are various schools of feminism with different interpretations, and some who do disagree that women posing nude leads to empowerment. I personally think that women should have the choice to show as much skin as they’re comfortable with, and it shouldn’t negatively impact their careers.

But I’d be lying if I said I’ve never had judgmental thoughts about women in various states of undress. Those thoughts are unquestionably wrong, and I admit that a woman’s sex appeal shouldn’t delegitimize any of her accomplishments or hard work.

However, I do think that in today’s society, posing nude or partially nude distracts from the credible work women do, which is part of the reason I choose to avoid posting racy photos on my Instagram account. I can get a lot more followers baring it all. But I also know it comes at a price, including gross comments from pervy dudes.

Don’t get me wrong, it’s not the way women present themselves that should be reformed, but rather the flawed logic and needless judgement people like me have time to time.

Obviously, guys don’t deal with the same level of criticism if they show off their bodies. Russian President Vladimir Putin literally staged a goofy shirtless photoshoot to show the people of Russia how “handsome” and “fit” he is. No one questioned his ability to lead a country as a result, although a lot of people did crack jokes about it.

Former Congressman Aaron Schock was applauded for his fitness when he flaunted his six pack on the cover of Men’s Health. Using his sweet pecs didn’t end his career, although using taxpayer money to lavishly decorate his office did.

So to summarize, yes you can consider yourself a feminist if you like to show your body off. But people like me need to consider the multifaceted nature of people in general. Men can be sex symbols and also earn respect for their professional accomplishments, and the same standard should apply to women.