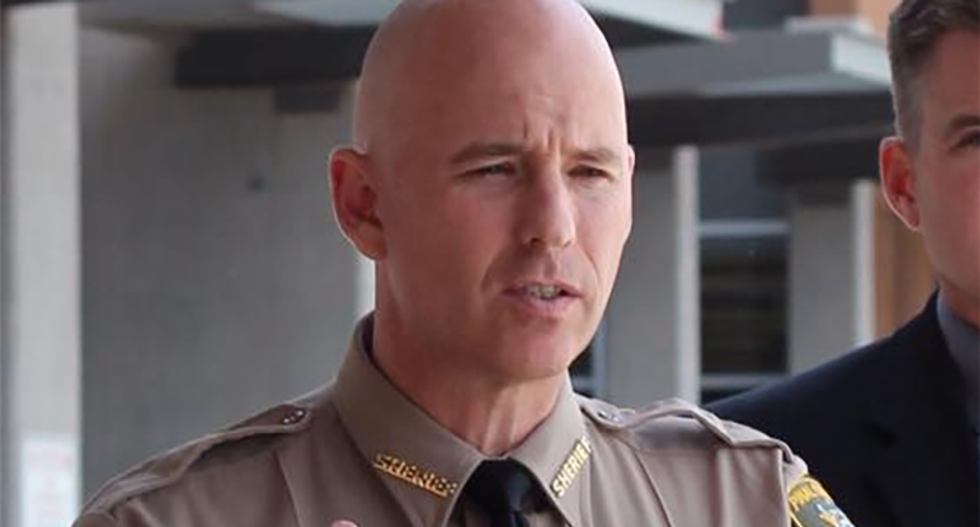 Pres. Donald Trump's nominee to head the U.S. Customs and Border Protection is being investigated by the FBI for possible improper use of money and weapons seized during criminal investigations.

Vocativ.com said Wednesday that the corruption investigation is "just the tip of the iceberg" of charges leveled against Paul Babeu, the right-wing former sheriff of Arizona's rural Pinal County.

For years, Babeu has been a frequent guest on Fox News, appearing as an immigration hardliner who wants to crack down on drug smuggling and human trafficking.

He appeared in a campaign ad for Sen. John McCain (R-AZ) and entertained congressional ambitions of his own until a 2012 scandal "that ultimately discredited the down-on-brown rhetoric he spewed on Fox News, forced him to come out of the closet as a 'gay American' and cost him a job as the Arizona co-chair of Mitt Romney’s presidential campaign," wrote Vocativ's James King, who was a reporter for the Phoenix New Times in 2012.

For six years, Babeu carried on an affair with an undocumented immigrant named Jose Orozco. Babeu reportedly threatened to use his powers as sheriff to have Orozco deported from the U.S. if he ever breathed a word about their relationship to the public.

"But Babeu’s penchant for scandal goes beyond dating an illegal immigrant and allegedly threatening him with deportation; lest we forget the school — described by one member of Congress as a 'place of horrors' — he ran for troubled youth before he became sheriff," said King.

From 1999 to 2001, Babeu was headmaster and executive director at the DeSisto School in Massachusetts, a "therapeutic boarding school" for at-risk students. The school was accused of rampant sexual, psychological and physical abuse of students.

"ABC 15, in Phoenix, Arizona, investigated the allegations and unearthed video of Babeu bragging about abusing students, some of whom had psychological disorders," said King. Students were allowed to impose strip-searches on each other and took group showers which "[led] to sexual abuse."

Babeu is accused of stonewalling an investigation into abuse at the DeSisto School and, more disturbingly, his sister Lucy Babeu told ABC 15 that she caught her brother engaging in a sexual relationship with a minor boy from the school.

“I said what is this student from DeSisto doing here? He says, ‘Lucy, he’s my boyfriend. I love him,'” Lucy Babeu said. “I said Paul get a hold of yourself here. You were his teacher! You were his executive director! You can’t do this.”

The investigation centers around accusations that Babeu and Voyles made improper use of money, property and weapons seized under the program of asset forfeiture, which allows law enforcement officials to take possession of any drug offender's property which they believe was illegally gained or used as "an instrument of crime."

Newly appointed Pinal County Attorney Kent Volkmer intends to review the FBI materials and has asked the Arizona State Auditor to to review the county's asset-forfeiture records to determine if monies were properly used.

Babeu is accused of funneling hundreds of thousands of dollars taken from drug offenders into the coffers of the Arizona Public Safety Foundation, a nonprofit agency run with close ties to the sheriff's office.

Under the law, seized funds are known as RICO money, named for the Racketeer Influenced and Corrupt Organizations Act. The money is purportedly only to be used by law enforcement agencies to fight organized crime.

However, Babeu's sheriff's department reportedly treated the seized assets as a "slush fund," channeling them to the Arizona Public Safety Foundation, which then turned around and spent the money on Babeu's department.

An ACLU lawsuit filed in 2015 says, "At a minimum, it seems that by funneling money to a private group which buys things for him and his department ... Babeu is able to avoid procurement laws and other transparency regulations which usually apply to government purchasing."

At Vocativ, King said, "Trump is yet to make a decision on who will head up the CBP, but given his sordid past, Babeu seems like he would fit right into a Trump administration that already is rife with turmoil, and seems hell-bent on booting 11 million people back across the border."