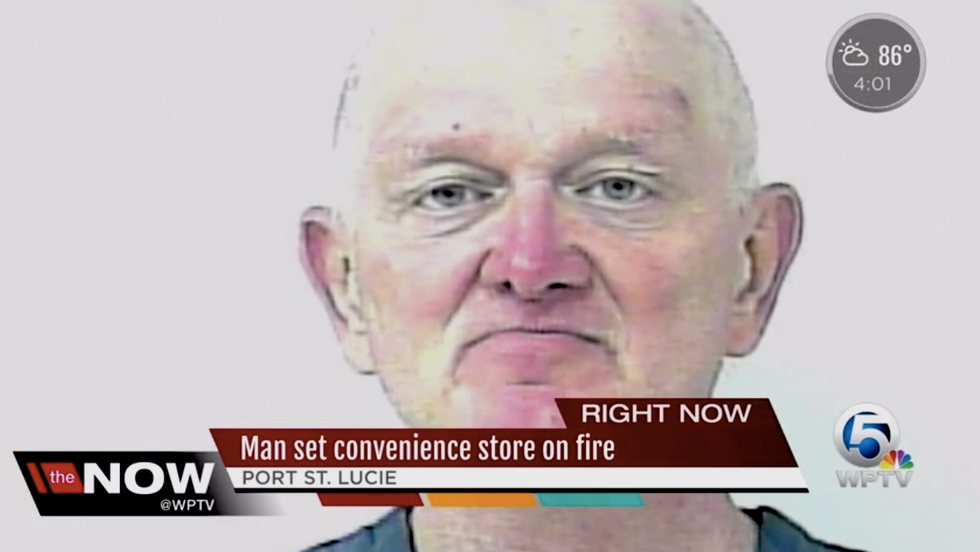 A Port St. Lucie, FL man tried to burn down a convenience store on Friday because he mistakenly believed that the owners were Islamic Arabs and he was angry at them for not carrying his favorite kind of orange juice.

According to WPTV, police arrested 64-year-old Richard Lloyd when he gave himself up at the scene and told sheriff's deputies that he was trying to "run the Arabs out of the country."

Lloyd had visited the store in recent days and got into an altercation with the clerk on duty and the store owner because they did not carry his preferred brand of orange juice. The store owner -- who is not Arabic, but Indian and not a Muslim -- told WPTV that he is still in shock from the incident and declined to appear on camera.

“When the deputies arrived, they noticed the dumpster had been rolled in front of the doors and the contents were lit on fire,” said St. Lucie County Sheriff Ken J. Mascara in a statement. “Upon seeing our deputies, the man put his hands behind his back and said ‘take me away.’”

Mascara continued, “The man, identified as Richard Lloyd, was read his Miranda Rights and then told deputies that he pushed the dumpster to the front of the building, tore down signs posted to the outside of the store and lit the contents of the dumpster on fire to ‘run the Arabs out of our country.' It’s unfortunate that Mr. Lloyd made the assumption that the store owners were Muslim when, in fact, they are of Indian descent.”

Lloyd's plan was reportedly to catch the rest of the building on fire and burn the store to the ground, he said. He was taken to the St. Lucie County Jail and charged with first-degree arson.

In a court appearance on Saturday morning, Lloyd told the judge he will be representing himself in court and that he was just "doing his part for America."