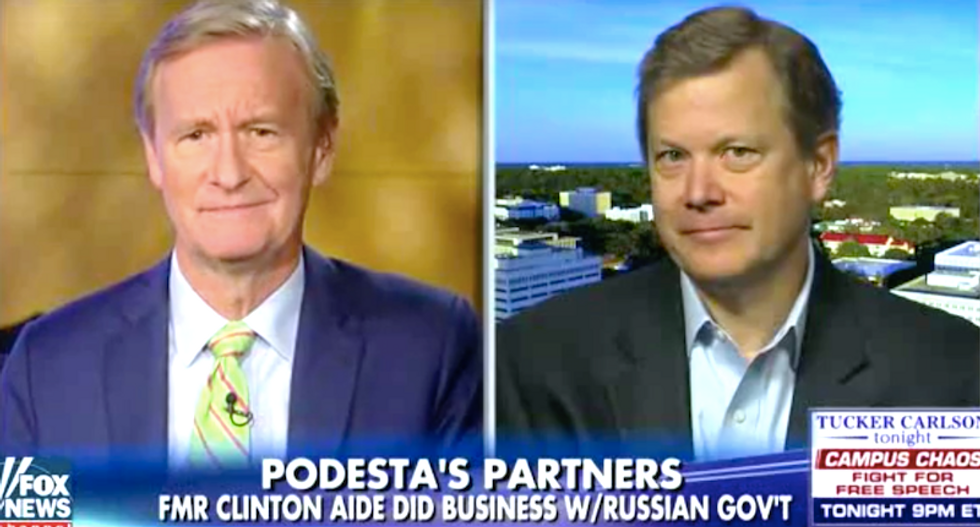 The president complained there had been little investigation of an investment by a Russian energy company into a U.S. firm while Clinton's former campaign chairman, John Podesta, sat on the board.

About 10 hours later, "Fox and Friends" hosted the author of "Clinton Cash" to explore those claims, and Trump once again took to Twitter -- this time to hype the TV news segment as it aired.

Peter Schweizer, the book's author, told host Steve Doocy that Podesta had in 2011 joined the board of Joule Unlimited Technologies, a privately held company based in Massachusetts that attracted a Russian investor about two months later.

That company, Rusnano USA, invested $35 million into Joule, which raised another $200 million from other investors.

"Now, what is Rusnano?" Schweizer asked. "Rusnano is not a private company, Steve -- it is a fund directly funded by the Kremlin. In fact, the Russian science minister called Rusnano (Vladimir) Putin's child. So you have the Russian government investing in one of John Podesta's businesses in 2011 -- while he is an advisor to Hillary Clinton at the State Department."

Rusnanon reportedly fell out of favor with the Putin government in 2007 -- but Doocy was duly impressed by Schweizer's claims.

"While is he an advisor to Hillary Clinton," Doocy repeated in disbelief. Okay -- does anybody in the Trump circle rise to the level where there is this kind of money involved?"

Schweizer said that he had not seen any evidence that Russian companies had invested that much money into any businesses associated with the Trump campaign, and Doocy asked whether Podesta might have broken the law by failing to disclose Russian investments in his portfolio.

The Daily Caller, which was founded by Fox News anchor Tucker Carlson, reported Monday that Podesta had failed to properly disclose stocks issued to him by Joule in 2014, when he left the board to serve as President Barack Obama's special counsel.

The Trump campaign, and surrogates such as Newt Gingrich, also pushed those claims -- which were based on Podesta's private emails that were hacked and dumped online by WikiLeaks -- during the election campaign.

A McClatchy report determined at the time that the Trump campaign's were misleading, and a Clinton campaign spokesman told the Wall Street Journal that Podesta had transferred his holdings to his adult children and recused himself from any government business related to Joule.