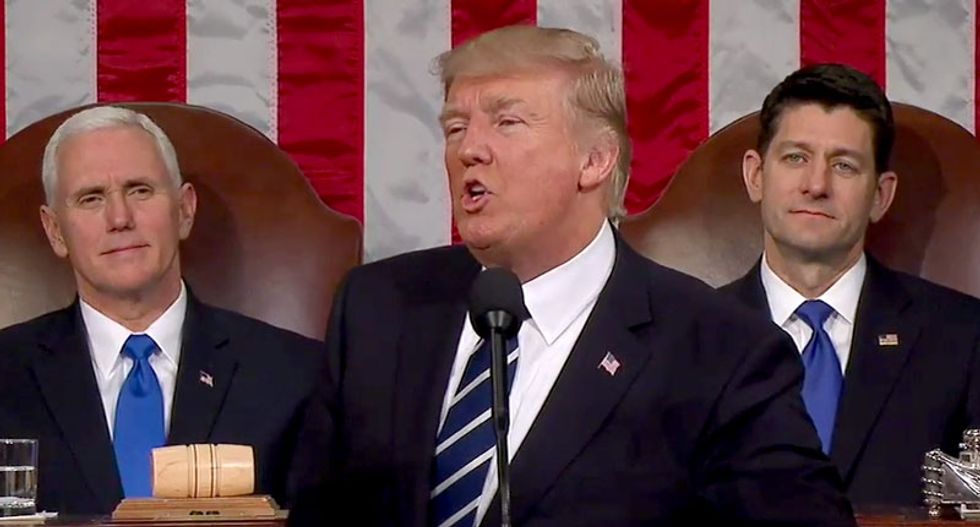 Six weeks of snarling demagoguery and bumbling incompetence established a low bar for Donald Trump’s address to Congress on Tuesday night, and he cleared it.

He read the text on his prompter smoothly and didn’t mention millions of illegal voters going for Hillary Clinton or harp on his margin of victory in the Electoral College (he did call his election an “earthquake”). His only criticism of the media was a glancing one – a rather silly lie about their supposed refusal to cover crimes committed by undocumented immigrants. He even kicked off the evening by condemning a recent wave of anti-Semitic attacks on graveyards and bomb threats against Jewish Community Centers across the country. That part felt more forced than forceful – which makes sense given that earlier in the day he’d implied that they might be false flag operations perpetrated by Jews to make Trump Supporters look bad – but he held it all together enough to make the pundits happy. CNN commentator Van Jones said Trump “became President of the United States” last night.

Trump’s strategy was transparent: He started out with a few minutes playing a statesman on TV, and then went into his usual campaign mode, with perhaps just a bit more polish than he displayed in his freewheeling stump speeches. But first and foremost, he avoided offering any details for his grand pronouncements and shied away from anything that even approached a concrete policy proposal.

The vague policy outlines he served up were, as The Washington Post described them, “a different tone but the same message.” But Trump can always surprise, and there were a few moments that stood out for the sheer chutzpah required to deliver them. Here are five.

Van Jones was gushing over the moment when Trump pointed to the weeping widow of Navy SEAL William “Ryan” Owens, the first soldier killed under his command, and then proceeded to declare the mission a success. Carryn Owens stole viewers hearts, but it took some serious balls for Trump to use her as a prop when earlier that day he had blamed military commanders for Ryan’s death, defense officials had said no valuable intelligence was collected in the raid and just two days earlier, Owens’ father, Bill, had accused Trump of “hiding behind” his son’s death.

The raid, which Obama had declined to sign off on prior to leaving the White House, was approved by Trump despite what officials told Reuters was a lack of “sufficient intelligence, ground support or adequate backup preparations.” The special operations force missed its prime target – who later took to social media to mock “the fool of the White House” -- but killed 30 civilians, including 14 children, one of whom was a US citizen. They also lost a $75 million helicopter. Several counter-terror experts told Vice that the clusterfuck “will almost certainly undermine U.S. counterterror efforts in the conflict-ridden country,” but on Tuesday Trump had the nerve to characterize it as “a highly successful raid that generated large amounts of vital intelligence that will lead to many more victories in the future against our enemies.”

Studies consistently show that immigrants commit crimes at a lower rate than the native-born. As the WaPo’s fact-checker pointed out, “Immigration and crime levels have had inverse trajectories since the 1990s: immigration has increased, while crime has decreased. Some experts say the influx of immigrants contributed to the decrease in crime rates, by increasing the denominator while not adding significantly to the numerator.”

But as Stanford University political scientist Larry Diamond has noted, “Grossly exaggerating the extent of crime and terrorism is a common tactic of leaders seeking to justify a slide toward authoritarianism.” And so Trump announced on Tuesday that he had “ordered the Department of Homeland Security to create an office to serve American Victims. The office is called VOICE --- Victims Of Immigration Crime Engagement. We are providing a voice to those who have been ignored by our media, and silenced by special interests.” It’s pure demagoguery – right down to the rather bizarre idea that “special interests” are somehow silencing these poor victims. Earlier reports suggested that this office would publish a list of immigrants who are arrested for crimes, a tactic popular with fringe anti-immigrant blogs and familiar to various authoritarian regimes in the past.

It’s normal for presidents to take credit for good economic news during their administrations, and to blame their predecessors for leaving them with a mess. But just six weeks into the job, this litany of achievements could only be offered with a straight face by a serious narcissist:

It’s been a little over a month since my inauguration, and I want to take this moment to update the nation on the progress I’ve made in keeping those promises. Since my election, Ford, Fiat-Chrysler, General Motors, Sprint, Softbank, Lockheed, Intel, Walmart and many others have announced that they will invest billions and billions of dollars in the United States and will create tens of thousands of new American jobs. The stock market has gained almost $3 trillion in value since the election on Nov. 8, a record. We’ve saved taxpayers hundreds of millions of dollars by bringing down the price of fantastic — and it is a fantastic — new F-35 jet fighter, and we’ll be saving billions more on contracts all across our government.

As The Washington Post pointed out, all of those companies had made those plans prior to Trump’s election, and Lockheed announced the drop in price for the F-35 fighter before Trump was involved.

The stock markets have gained $3 trillion since Trump’s inauguration, but that was a rebound from the $3 trillion sell-off nervous investors had undertaken in the weeks leading up to it.

It was nothing new – in fact, it’s a ubiquitous talking-point on the right – but we should note just how utterly divorced from reality Trump’s claims about immigration enforcement and the border really were. He said that “we’ve defended the borders of other nations while leaving our own borders wide open for anyone to cross,” claimed that he had ”answered the pleas of the American people for immigration enforcement and border security” and promised to “finally enforce[e] our immigration laws.”

The truth is that the federal government prosecutes more individuals for immigration-related offenses than all other categories combined. Congress has increased spending on border security by 1,450 percent over the past two decades. The number of Border Patrol agents along the southern border rose from fewer than 3,500 in 1993 to over 18,000 in 2013, and the U.S. now spends $18 billion annually on an alphabet soup of immigration enforcement agencies. In 2012, a report by the Migration Policy Institute estimated that immigration-related law enforcement was “approximately 24 percent higher than collective spending for the FBI, Drug Enforcement Administration, Secret Service, U.S. Marshals Service, and Bureau of Alcohol, Tobacco, Firearms and Explosives.” According to a 2007 analysis by The Washington Post, ICE “holds more inmates a night than Clarion hotels have guests, operates nearly as many vehicles as Greyhound has buses and flies more people each day than do many small U.S. airlines.” This gives some sense of how ludicrous it is to claim that we’re not enforcing the laws.

The moment that raised the most eyebrows across America probably came when Donald Trump, who shouts at the TV when SNL is on, has waged an endless series of wars with public and private figures on social media, freaks out when media outlets run unflattering photos of him and has held a decades-long grudge over one writer calling him a “short-fingered vulgarian,” faced the American people and said, “the time for small thinking is over. The time for trivial fights is behind us.”

That was the only laugh-line of the evening.