Joy Reid: Trump is surrounded by white nationalists like Bannon who keep him 'believing in conspiracy theories' 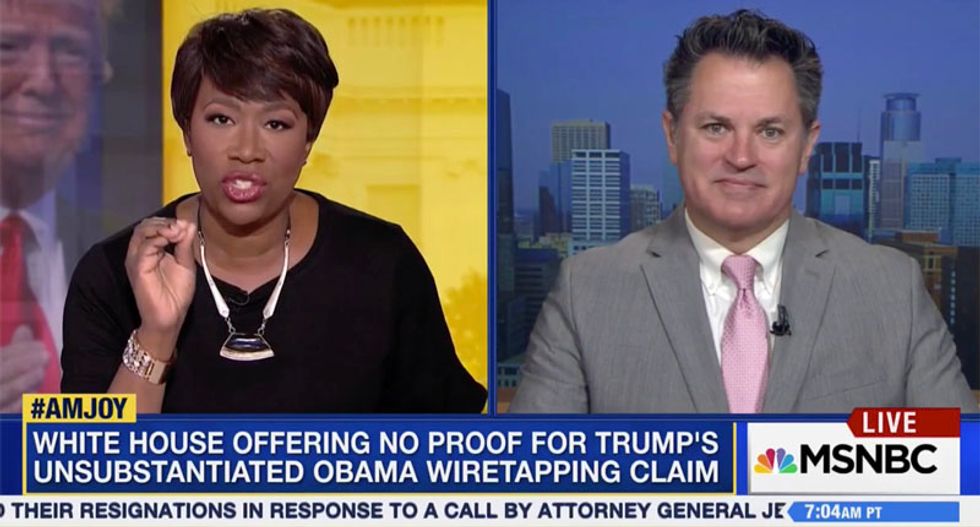 During an AM Joy panel on Donald Trump's allegations that he he's being wiretapped by Barack Obama, host Joy Reid pointed out that the president is kept in a state of constant paranoia by his closest advisers who are feeding him conspiracy theories as facts so they can push their agenda.

After law professor Rosa Brooks suggested that Trump is either "nuts" or is only dimly aware of what is going on around him, the MSNBC host said there was more to it, adding the "Bannonites" are behind Trump's wild claims.

"I think actually that is a very important point to make because you do have a president who is surrounded by sort of an alt-state and that is Bannonites -- I don't know what you call them," Reid explained. "They want this Christian white nationalistic ethno-state, I guess. And people like Steve Bannon, people like Sebastian Gorka, and Stephen Miller. There is a core of people around Donald Trump who want him to keep believing conspiracy theories, who want him to essentially believe President Obama can wiretap him from Hawaii or wherever he happens to be."

Security analyst Malcolm Nance took it a step further, pointing out how dangerous it is having a "conspiracy theory president."

"We have a conspiracy theory president and I'm not even sure whether you can put those three words together in a tangible sentence and use the word president," Nance stated.  "He seems to be buying every crazy idea that's out there. Now, granted, the man can't seem to tell the truth about anything."

"This is dangerous and, as much as is sounds amusing, he controls 4,000 atomic weapons," Nance continued. "He controls the levers of power in the United States. if he's going out with Steve King and other in Congress and saying that the president of the -- the former president of the united states wiretapped a conversation he had a few weeks ago with the president of Australia, I mean we have got a very serious problem here."