Maddow trolls Trump Jr.: If your dad's 2005 taxes make him look great -- release them all 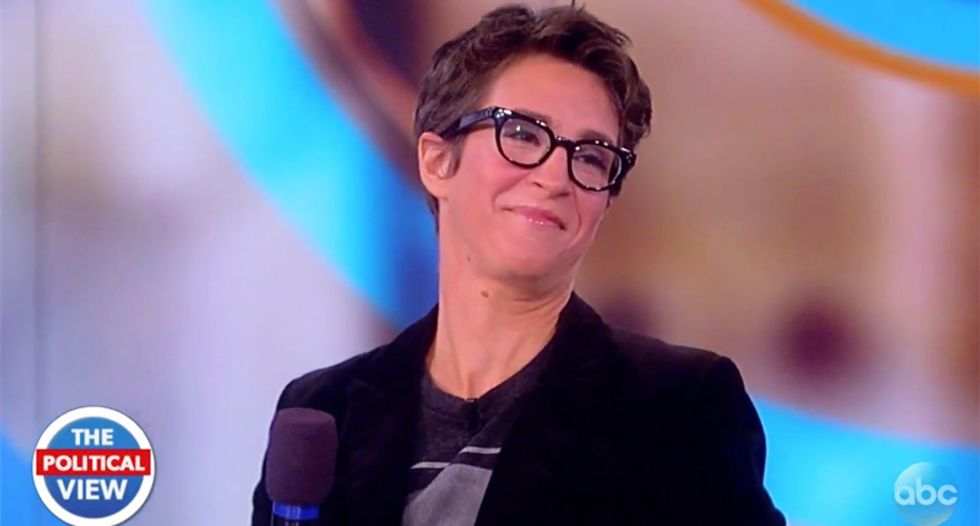 Addressing the son of President Donald Trump, who thanked her for releasing his dad's 2005 tax returns, Rachel Maddow said if the Trump family is that thrilled by the exposure then there should be no reason to not release all of the President's tax returns.

Appearing on The View,  the MSNBC host defended her prime time expose of Trump's 2005 tax returns, saying she not only "got it right," but that "the world didn't fall apart" when she revealed them.

Maddow explained that it was entirely possible that the returns were leaked by Trump himself in an effort to distract from White House turmoil over the impending Russian investigation,  despite the president tweeting her reveal was "fake news."

View co-host Sunny Hostin pointed out that Donald Trump Jr. tweeted out his appreciation for the exposure, writing: "Thank you Rachel Maddow for proving to your #Trump hating followers how successful @realDonald Trump is & that he paid $40mm in taxes #taxes."

"My favorite thing about those two things together is, like, okay, it's an amazing release of his tax information that shows he's super-rich and pays taxes," Maddow said while laughing. "Also, it's fake and it's illegal to publish those. I'm happy to absorb either one of those punishments from the family -- but both of them? It's either fake or it's real, you guys have to pick one."

"We know very very little about his finances," she continued. "What's important about getting that little piece of it is, it proves that you can release some of his tax returns without the world ending. He's had weird excuses for not releasing his tax returns. 'I'm under audit.' Well every president has been under audit since Nixon and they have all released his tax returns."

"So what do you think he's afraid of?" co-host Joy Behar asked.

"I dunno," Maddow replied. "So why doesn't he release them? The explanation for why he won't doesn't make sense. We've now seen, with me releasing these two pages, that you can release it and it's not necessarily bad news. Why are you so afraid?"

"The thing is that," she continued, "if the White House continues to insist that there's nothing in the tax returns that's going to make him look bad at all, and there's nothing to this Russia story, well, prove it, do it."