NYPD officers allegedly put black teen in chokehold while he was having a seizure: witnesses 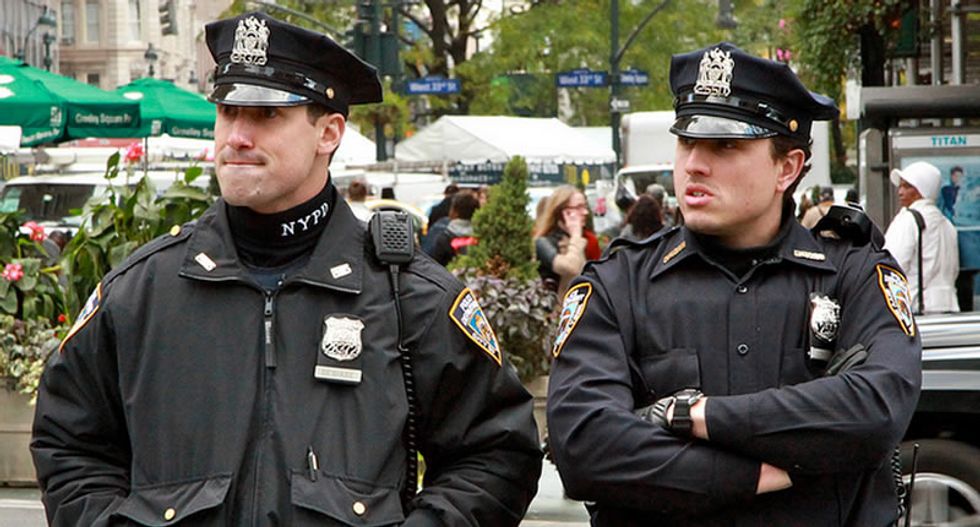 Zavon Hodges, a 17-year-old black teen, was reportedly having a seizure on Monday afternoon when NYPD officers used a chokehold on him, witnesses told the New York Daily News.

Officers stopped Hodges for possession of drugs in the courtyard of Brooklyn’s Pink Houses complex when he dropped to the ground and started to have a seizure, residents said. According to Hodges' cousin, the NYPD officers handcuffed Hodges, and dragged him to a tree, placing him in a chokehold.

"They all hopped out of the van and started choking him," said 19-year-old Joseph Agnew. "He fell to the floor and started shaking, he was having a seizure and they put cuffs on him."

Hodges' sister, 25-year-old Shaunte Greene, told the Daily News, "They choked him because they thought he was resisting arrest. He was just panicking."

A spokesperson of the NYPD denied the claims. They alleged there was no seizure, and maintained that officers did not use a chokehold. Rather, according to the NYPD, officers were "responding to a call about a man with a firearm when a man started running and threw himself on the ground before faking a seizure," the Daily News reported.

The use of chokeholds by New York police has been banned since the early 90s, but its use has continued to be implemented.

New York City Councilman Rory Lancman accused the city in 2016 of loosening restrictions on the use of chokeholds, "making it more, not less, likely that they will be used," Lancman said.

Referring to a "secret rule" within the NYPD's updated use of force guidelines, Lancman said, "the NYPD has gone from a complete, unqualified ban on chokeholds, to an ambiguous and subjective 11-part test measuring whether the use of a chokehold is acceptable."

In 2014, 47-year-old Eric Garner was killed by police in Staten Island who put him in a chokehold that resulted in a heart attack. In 2014, 27-year-old Rosan Miller accused NYPD officers of putting her in a chokehold for illegally grilling. She was seven months pregnant at the time.

That same year, 28-year-old Akai Gurley was shot and killed by an NYPD officer in the Pink Houses complex where Monday's incident occurred.

Hodges was charged with disorderly conduct and criminal possession of marijuana.