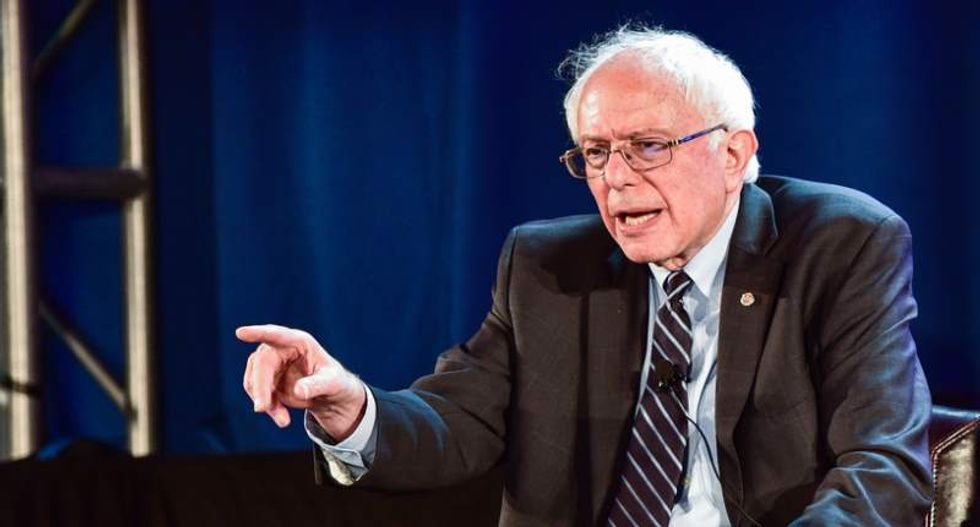 The shocking series of interviews revealed large Facebook groups supporting Sanders were inundated with content from people with no ties to the regions in which the pages were located. Former reporter John Mattes explained that his San Diego page became overwhelmed with anti-Clinton memes with messages he'd never heard coming out of the Sanders campaign. Instead, they were memes alleging Clinton used body doubles and murdered political opponents.

He initially suspected the posts were coming from anti-Clinton sites run by 1990s Clinton opponents, but he quickly found out that domain names were registered in Macedonia and Albania. Websites like WorldPoliticus.com, TrumpVision365.com, USConservativeToday.com, DonaldTrumpNews.co and USADailyPolitics.com are just a few of the sites that trafficked in fake news against Clinton. By the end of October he traced at least 40 percent of the domain registrations of the fake news sites on pro-Sanders pages back to Eastern Europe. Some others were based in Panama and the U.S. or untraceable.

“I may be a dark cynic and I may have been an investigative reporter for a long time, but this was too dark ― and too unbelievable and most upsetting,” Mattes said. “What was I to do with this?”

He wasn't the only one that saw it either. Sanders supporters saw the strange connection well before the DNC hack was revealed in June 2016.

One woman even drafted a memo to Sanders supporters to warn them against fake news sites so they wouldn't traffic in misinformation and fake news.

“The pattern I’m seeing is if a member is repeatedly posting articles that are only from one URL that person is just there to push advertising,” Aleta Pearce of Malibu, California wrote. “They probably have a sock account with little to no content. They are often from Russia or Macedonia.”

She urged other Sanders supporters to "chase the mice out of the hen house."

Sanders' digital outreach staffer Hector Sigala also warned supporters running Facebook groups that there were "a lot of trolls" working to convince supporters things that were "obviously fake." Many of the fake accounts pretended to be Democrats that were going to vote for Donald Trump or Green Party candidate Jill Stein. Many of them were from the alt-right gathering site 4chan, according to him.

“It made it seem like the community as a whole was supporting that, but that wasn’t the case,” Sigala said. When they first saw the content in early 2016 they fell for it, but after a few minutes, they realized the site was not ABC.com, but rather ABC.com.co.

One woman who ran a pro-Sanders Facebook group became overwhelmed with requests to join the group. She explained the organizers couldn't vet every person. when the people were allowed in, a "tsunami" of misinformation "came in like a wave... like a flood," Bev Cowling told the Huffington Post.

The posts were so absurd Cowling even created the word "ridiculousity" to describe it. But when she fought back against misinformation she was accused of being a "Hillbot" or a Trump supporter. She ended up banning people spreading conspiracy theories from the group.

One Tennessee man noticed all of the anti-Clinton content came from the same accounts and all of those sites he traced went back to Veles, Macedonia. Matthew Smollon said that he never found a single pro-Clinton link from any of the accounts. Huffington Post noted that Wired dubbed the country as the "Fake News Factory of the World" in a Feb. 2017 expose.

Smollon said that he tried to convince other Sanders supporters they were being played but none of them cared. “At that point, you were a Hillary shill. It was like an echo chamber of anger," he said. He even earned a backlash for pointing out NBCPolitics.org was a fake site, the real one is NBCNews.com/politics. He was removed from being a moderator from his group.

“It’s the closest I’ve been to being gaslit in my life,” he said. He resorted to writing a Medium post with the headline “Dear Bernie Supporters: Stop sharing posts from dumpster fire websites.” He called on Sanders fans to stop "circle-jerking clickbait links in between wondering how Hillary Clinton is behind the FEMA Earthquake drill that happens on several days with one of them being primary day?"

He was removed from another Facebook group, "Bernie Believers" as a result of the piece.

“This is a pretty solid case for admins/mods being part of the spam,” Smollon wrote. “Not all of them obviously, but it only takes one person running with an ulterior motive to ensure the whole thing goes to shit.”

One day, a Sanders' staffer tasked with digital advertising noticed a pro-Clinton ad in the newsfeed with conspiracy theory ads on either side of it.

“Was there a Russian entity supporting those websites that popped up?” Keegan Goudiss told the Huffington Post. “That’s important and people deserve to know who influences our democracy.”

One pro-Sanders group was overwhelmed with bad translating that barely makes sense. Since the election, the page has shifted to urge Sanders to run in 2020. The page once only shared links from Bients.com but now they're from ThePredicted.com. Both are owned by Hysen Alimi in Albania.