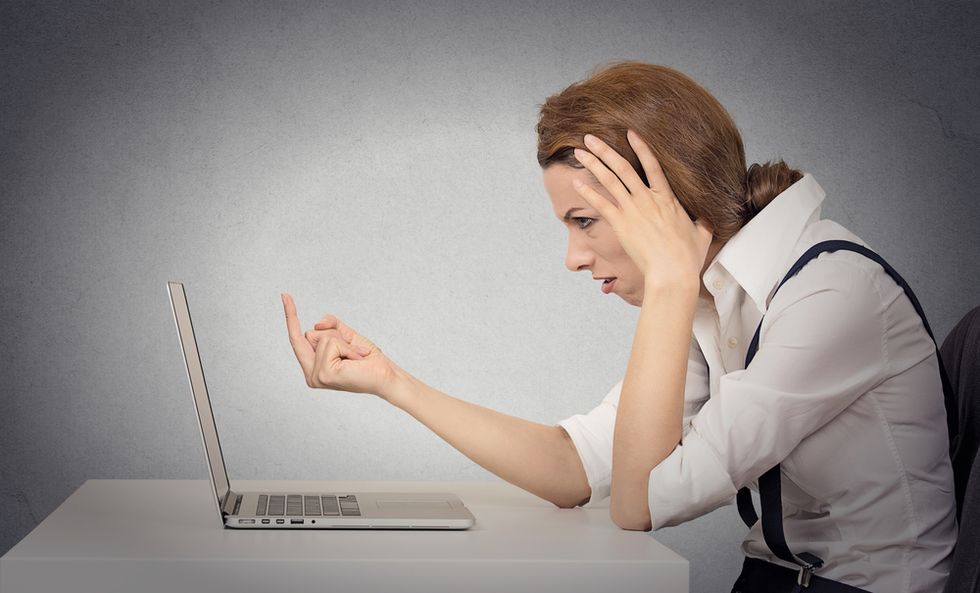 Woman upset at something she read online (Shutterstock.com)

The Labor Department on Friday released a strong jobs report showing the US economy added 235,000 jobs in February. During his White House press briefing later in the day, Spicer was asked about Trump's previous claims that positive job reports under the Obama administration were "phony or totally fiction."

"I talked to the president prior to this, and he said to quote them very clearly. They may have been phony in the past, but it’s very real now," Spicer replied, prompting laughter from reporters in the room.

"I know it was delivered as a laugh line from Sean and got laughter in the room from reporters -- I'm not so sure all of America will laugh at that," CNN political director David Chalian said afterward.

"It is an admission of blatant hypocrisy," he continued. "I mean, it's like the most traditional politician thing you could do -- which is not Donald Trump's brand necessarily -- to say that when it is not in my favor I'm going to say this, and when it is in my favor, I'm going to say that. That is the thing about politicians most people in the country don't like. So I don't know it is necessarily a joke. It is a total admission of blatant hypocrisy."

"Spicer’s breezy dismissal of the question was a tacit admission that Trump had indeed lied when he trashed good employment news during the administration of his predecessor Barack Obama," Jon Levine wrote at Mediaite. "If the fourth estate treats future administration falsehoods as a joke, they will become the fake news which they have so often been accused."

Given the reaction on Twitter, many Americans were in fact not laughing:

@voxdotcom I'm outraged, offended, saddened and more hopeless- are all the reports in on the joke? Making a mockery of the American public
— Zoe Hess (@Zoe Hess)1489175951.0

@MSNBC Real funny--everyone accepting that our President is a serial liar & does so when it fits his own view of alt-reality. Ha-Ha-Ha.
— Hari Bhajan Khalsa (@Hari Bhajan Khalsa)1489173082.0

Sean Spicer jokes jobs numbers "may have been phony" before but are real now. Press laughs. Lying is now embedded. https://t.co/JXpxDKBJE1
— shauna (@shauna)1489175167.0