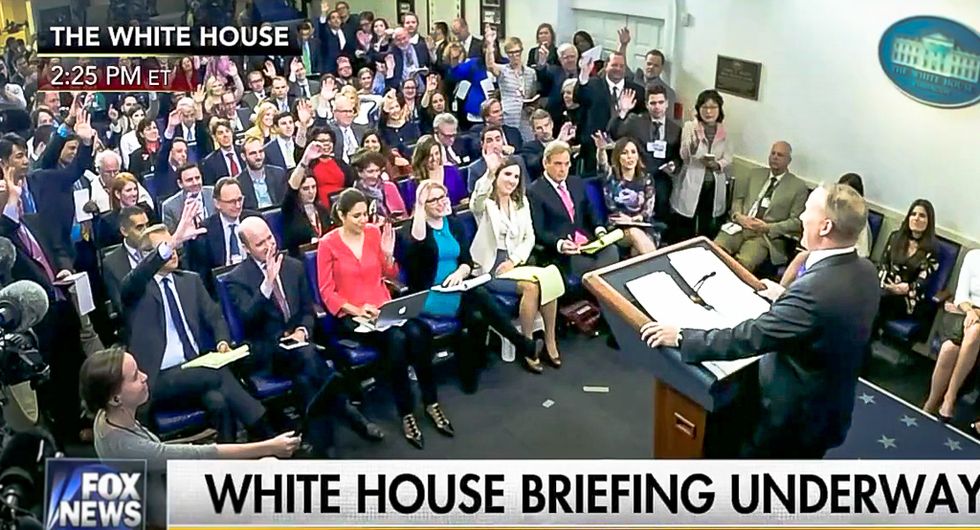 White House Press Secretary Sean Spicer on Wednesday made the mistake of asking reporters if they wanted President Donald Trump to end his days-long refusal to speak on the record about a number of topics, including the baseless claim that he was illegally wiretapped by President Barack Obama.

"Is it possible that we could see the president for a more general multi-question news conference," Real Clear Politics reporter Alexis Simendinger asked Spicer at Wednesday's briefing. "He's been a little press shy this week, from North Korea to health care selling to CIA leaks. We'd like to talk to him. Can we see him for a news conference?"

"I will ask... Is there anyone else?" Spicer asked sarcastically. "Show of hands?"

Spicer's quip was met with a nearly unanimous response from the press corp.

"I appreciate [that]," Spicer said. "I'd be glad to ask the president, [to] share your request with him and see what we can do on the schedule. But you know that he is very busy these days, he has done a lot of [photo] sprays, and he will continue to interact with you guys. But I would be glad to make your request known."

According to CBS White House Correspondent Mark Knoller, all of the events on the president's Wednesday schedule were closed to the media.

Watch the video below from Fox News, broadcast March 8, 2017.