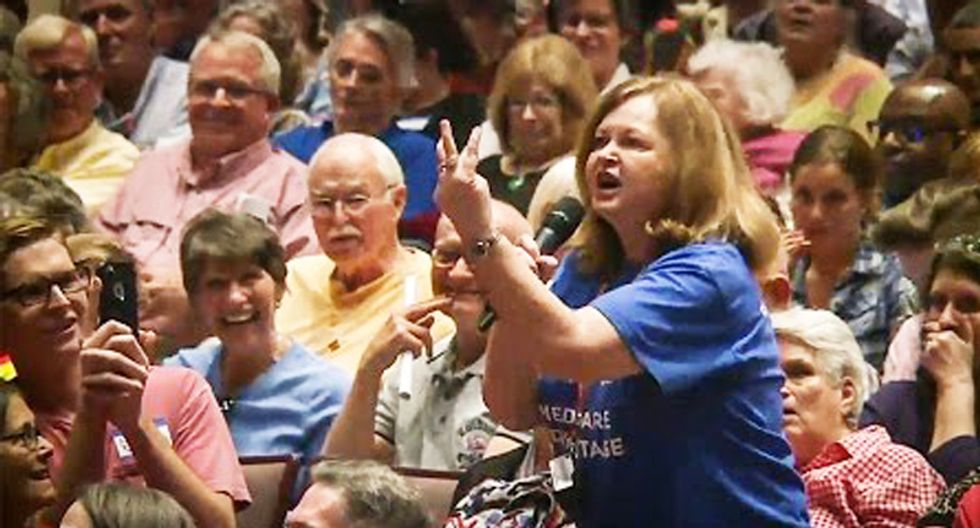 Hours after House Republicans released their Obamacare repeal bill, sharp divisions among GOP lawmakers erupted, suggesting the repeal effort might implode. But by Wednesday, the White House was plowing ahead and lobbying with Speaker Paul Ryan.

Initially, pundits speculated the GOP leadership's legislation might not get through both chambers. A slew of House right-wingers said it didn’t go far enough to dismantle the funding mechanisms bringing coverage to 20 million recipients. Meanwhile, a few Republican senators opposed its funding cuts to their state’s Medicaid expansion, suggesting it might not have sufficient support to pass that chamber.

On Tuesday, AARP, the lobby for people over age 50 and retirees, came out against it. By Wednesday, the American Medical Association and American Hospital Association weighed in, joining Democrats in opposing the House bill. But other businesses and interests that would see tax cuts benefiting them announced their support.

"This legislation as currently drafted is...likely to result in a substantial reduction in the number of Americans able to buy affordable health insurance or maintain coverage," a letter to Congress from hospital and health care organizations said. "Currently, 21 million Americans have gained health care through the marketplaces and through expansion of the Medicaid program. We are very concerned that the draft legislative proposal being considered by the House committees could lead to tremendous instability for those seeking affordable coverage."

What is unfolding in American politics and health care is unambiguously dire. Republicans clamoring for repeal are in an ideological bubble where they are blind to its real-life implications, from individual hardship to wreaking chaos in the health care system. But beyond the bill's specifics and the growing political fray is the larger reality that the repeal legislation is really the first salvo in a Republican-led class war on ordinary Americans.

"The bill aims to take a wrecking ball to the principle of universal coverage," wrote John Cassidy for the New Yorker. "If enacted, millions more Americans would end up without any health care. For many people who purchase individual policies, especially older people, it promises fewer services for more money. And it also proposes a big tax cut for the rich, which would be financed by slashing Medicaid, the federal program that provides health care to low-income people."

From a political perspective, right-wingers have lost touch with reality. They think current House proposals that will cut coverage for millions, raise costs for millions more and impose rationing on Medicaid clients are insufficient. Their demand for more spending, taxation and regulatory rollbacks are likely to be met somewhat to push the legislation ahead. Their rhetoric, that Obamacare repeal  is an act of fiscal responsibility, is a big lie affirmed by the bill’s tax breaks for wealthier Americans and health industries. Make no mistake, the House leadership's bill seeks to redistribute billions in health care spending dollars upward. Obamacare’s taxes and subsidies did the opposite, to preserve private insurers but expand the public's coverage.

Even with Trump lobbying members of Congress, Ryan still needs to deal with tantrum-throwing right-wingers who have labeled his bill, “Obamacare 2.0” (Rep. Justin Amash, R-MI), “the last thing we need” (Rep. David Brat, R-VA) and a “new entitlement” (Rep. Mark Sanford, R-SC). The worst of the repeal legislation remains to be seen.

Stepping back from the opening salvos, health policy experts who have real-life experience running government safety net programs say dismantling Obamacare is a foil concealing a larger target—gutting public health programs writ large, regardless of its impact on ordinary Americans (such as forcing millions to shift their limited resources toward paying for health care or going without it).

There’s no shortage of analyses confirming these painful consequences, starting with the New York Times’ lead editorial Wednesday, “No wonder they hid the health bill.” Andrew Slavitt, acting administrator for the federal Centers for Medicare and Medicaid Services from 2015 to 2017, wrote in the Washington Post that the GOP’s proposal would not only drive up premiums, deductibles and co-pays for millions and undermine current insurance markets, but would also shred public safety nets literally involving matters of life and death.

“In my time overseeing the government agency that runs the [Medicaid] program, we dealt with many unexpected shocks—Zika [virus], high-cost drugs and the national opioid epidemic, to name a few,” Slavitt wrote. “Under the [per capita Medicaid spending limit] changes sought by Republicans, states would no longer have the resources to manage these crises, with devastating results for our communities. Medicaid pays for nearly half the births and half the long-term care in this country, to say nothing of the millions of Americans with disabilities who rely on it. If the federal government retreats on its commitment to Medicaid, the repercussions will be felt quickly—by our neighbors and by our care providers and hospitals.”

Slavitt didn't stop there. He said the bill’s goal was to set the stage for dismantling the government’s other major health care program, Medicare, which serves senior citizens. Here, too, under the guise of fiscal austerity, right-wingers would alter the system of paying for health care and seek to replace it with a fixed-expense model that would shift unexpected health care costs onto families.

“The bill would cut several years from the life of the Medicare trust fund, but that’s clearly no accident: The program would wind up right where ‘entitlement hawks’ such as House Speaker Paul D. Ryan (R-Wis.) want it—in crisis,” Slavitt said. “If this bill became law, the speaker would finally be positioned to change Medicare to a [per capita] voucher program.”

There’s no shortage of additional examples about how the proposal would be a fiscal hardship for average Americans. It replaces Obamacare’s subsidies with annual tax credits of between $2,000 and $4,000. Forget, for the moment, that right-wingers like Sen. Rand Paul, R-TN, and the National Review are saying those proposed tax credits are too generous.

A $4,000 tax break, at best, would cover a smaller slice of the current premiums than most Obamacare subsidies, especially for those over age 50. The bill also allows insurers to raise premiums on older Americans another way, because it allows the industry to charge older customers five times what they can charge younger people. Under Obamacare, that ratio was three to one.

The bill’s sponsors say they would augment tax credits by expanding health savings accounts. Apart from the reality that average American households would be hard-pressed to put $500 or more away each month to offset what independent analysts said could be thousands more in annual health care costs, the GOP is essentially telegraphing that it wants people to use more of their savings for health care—not for college, higher education, mortgages, elder care or retirement.

It's important to note what Republicans are not talking about. While their messaging is emphasizing premium increases under Obamacare and how the program's insurance exchanges are suffering from lack of competition, the GOP is not discussing who is making undue profits in American health care. Nor are they discussing the simplest reform that would address the maladies they cite, allowing Obamacare states to create interstate pools where risk and costs could be shared among greater numbers of people and insurers.

While the politics of the Obamacare repeal effort are only beginning, what’s clear is its GOP sponsors are tinkering with the rules governing one-sixth of the economy in a manner that appears to be a giant transfer of wealth upward. These Republicans can talk about “free markets” and “individual choice" all they like, but there’s a better phrase for it: class warfare.

Republicans are poised to unleash a wave of health insecurity and economic hardship on poor, working- and middle-class Americans, as well as on the nation's system of medical providers, public health institutions and social safety nets. On social insurance listservs and discussion forums Wednesday, there was a debate about what to call the GOP bill: The Deplorable Care Act? The Unaffordable Care Act? Trumpcare? The I Don't Care Act? No matter what one chooses, this is class warfare and it will be painful.