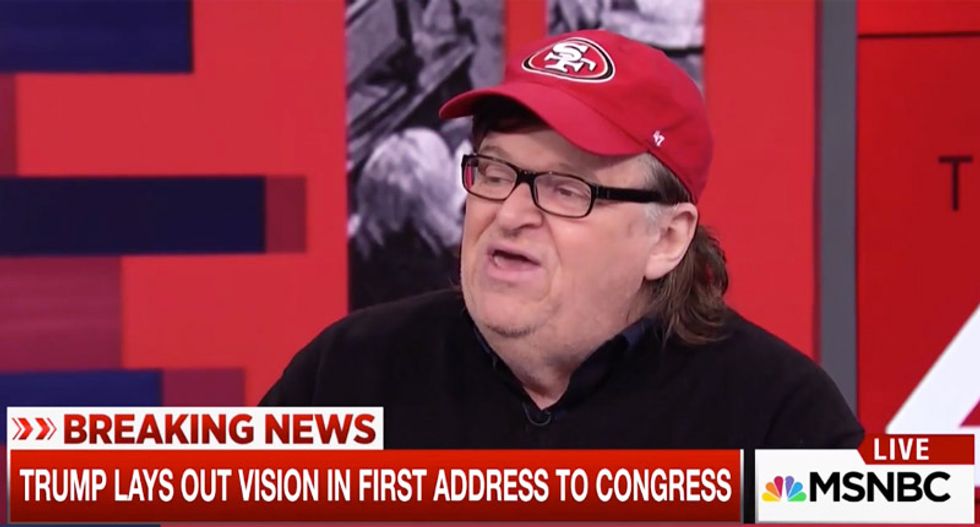 Appearing on a special post-speech edition of Hardball, filmmaker Michael Moore lambasted President Donald Trump for standing at the podium before Congress and boasting about getting a crowd to applaud long and hard for the widow of Navy seal as if he was going to win an Emmy for it.

In one of the most memorable moments in an otherwise highly scripted speech, Trump introduced the widow of Navy Seal William “Ryan” Owens who died during an mission in Yemen that Trump ordered.

Guest Moore was asked by host Chris Matthews, "What do you think about his counting the applause minutes that passed over a very poignant moment with the widow, who looked like a wonderful person, in love with her husband? Then he said 'He'll be happy up there in heaven with how many minutes of applause he got.' Isn't that strange?"

"Ryan Owens, his death came as a result of a dinner Trump had with his son-in-law," Moore replied. "The widow, that's why she's there as sort of an F-you to the people who are criticizing him for this. And this poor women, this widow who has lost her husband is in desperate grief right now."

"And to use that to put another notch on his belt and what is he thinking about?" Moore continued. "'My ratings, my record applause. I'm going to get an Emmy for this, most applause for a dead soldier on my watch.' That is the sickness of this man."