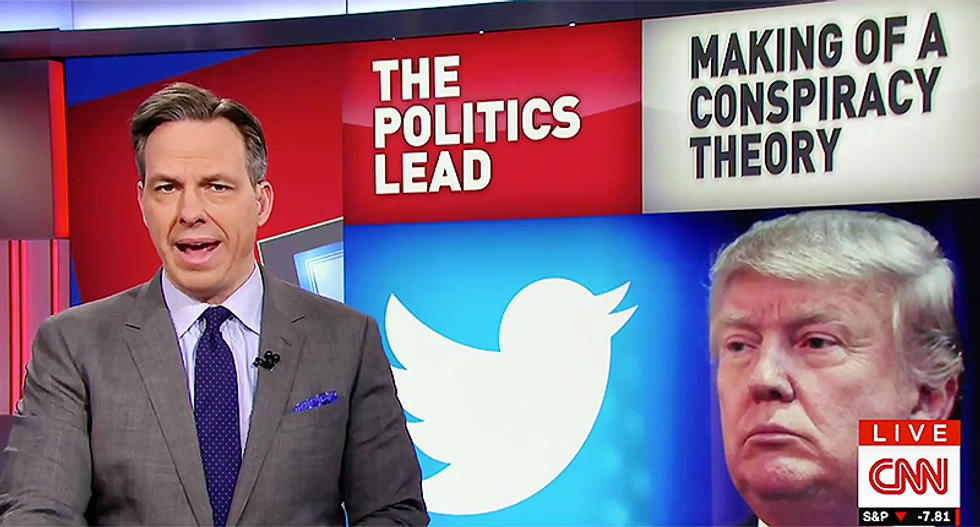 Jake Tapper on Monday issued a brutal take-down of Donald Trump’s latest conspiracy theory, that Barack Obama wiretapped Trump Tower during the 2016 presidential campaign, lambasting those around the president who are “enabling” his “nonsense” claims.

“Where did the president get this latest conspiracy from?” Tapper asked, tracing it back to right-wing radio host Mark Levin’s suggestion that Obama and his allies mounted a “silent coup” against then-candidate Trump. That notion made its way through conservative outlets, including Breitbart, before landing on the president’s Twitter feed.

Tapper explained that “rather amazing detail” of Trump’s latest claim is that none of the conservative outlets “reported as fact what President Trump is claiming.”

“It would be back enough if the president valued conjecture and accusations of these sources more than the facts that he has access to,” Tapper said. “ … But it’s actually worse than that.”

Trump, he explained, took separate pieces of information and “made them even less tethered to fact.”

“He took it one step forward and said [wiretapping] happened and President Obama was behind it,” Tapper said. The CNN host argued while there are “legitimate reasons” to question leaks and motivations behind them, Trump decided to push an unsubstantiated conspiracy theory about his predecessor.

“Keep in mind one not-irrelevant detail here for anyone trying to make sense of it all,” Tapper continued. “We’ve been here before, and this is not a land with much sense, or respect for facts. This is a place of conspiracy theories untethered to facts.”

Tapper then listed off numerous other false theories propelled by Trump, from birthirism, to Muslim celebrations on 9/11, to Ted Cruz’s father having something to do with John F. Kennedy’s assassination.