WATCH: Rep. Darrell Issa mocks woman at town hall who claims she was 'battered' by one of his staffers 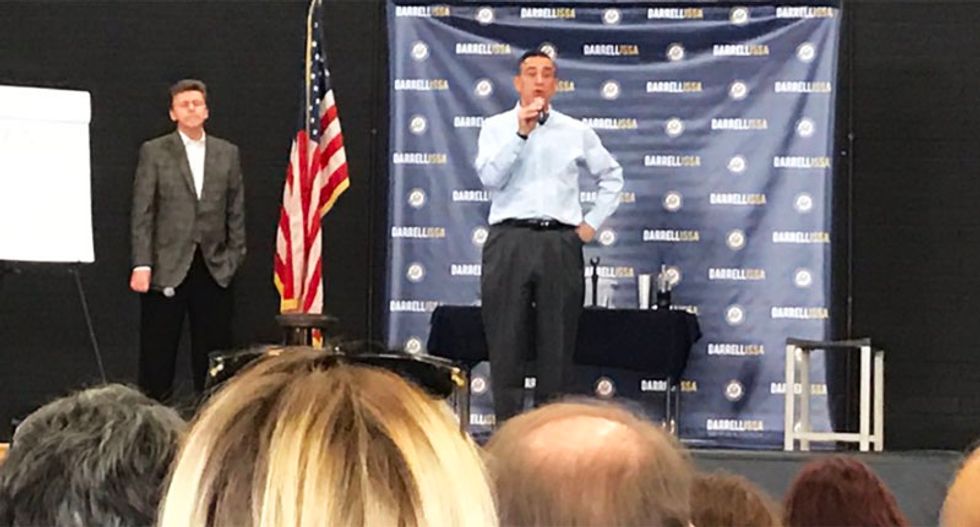 At a contentious San Diego town hall, Rep. Darrell Issa (R-CA) dismissed and mocked a constituent who used her question time to complain that she was stripped of her protest sign by Issa's "bodyguard," saying he "assaulted" her.

In the video uploaded to YouTube, the woman identified herself as a member of the State Bar of California before stating that her "1st Amendment rights were violated in this room."

"I had a very small sign that said,'Investigate Russia now,'" she explained to the congressman standing on the stage. "There are many other people with signs here. You bodyguard, security guard, came over and took my sign away from me forcibly. I asserted my 1st Amendment rights of free speech. I told him it was suppression of speech."

Issa responded by cutting her off and saying only oversized signs were banned, with the congressman then going back and forth with the woman over the size of her sign before he apologized.

"Mine was small and it was forcibly taken from me and it constituted a battery," the woman asserted. "It was your staff. They committed a criminal offense against me"

At that point, Issa no longer had any interest in hearing the woman's question and dismissed her.

"Well, okay" the congressman said as a staffer grabbed the mic from her. "We'll go on to somebody who doesn't have a pending lawsuit. Next!"

As the woman sat down, the crowd began to boo Issa.