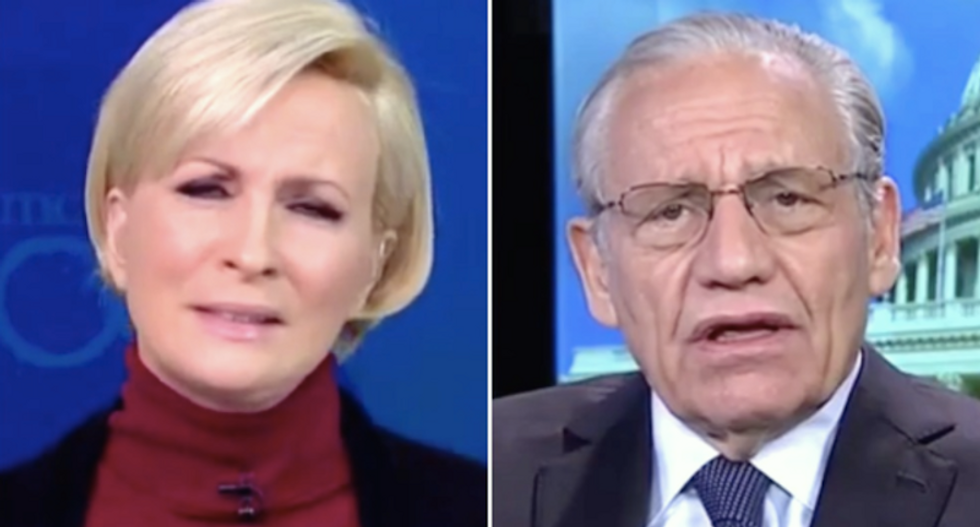 Veteran journalist Bob Woodward appeared on MSNBC's "Morning Joe" to talk about President Donald Trump's baseless wiretap accusations against his predecessor, but he just couldn't bring himself to call the false allegations a lie.

The White House continues to defend the president's tweeted accusation against Barack Obama, although the former president and national intelligence director have denied the claim, and the current FBI director and Republican chairmen of the House and Senate intelligence committees have found no evidence to back Trump's allegation.

MSNBC's Mika Brzezinski said, if no evidence exists, then the president has lied.

"You have to be suspicious, (but) at this point I would not agree with you, Mika, and say at this point that Trump lied," Woodward said.

Woodward described the unusual activity at Trump Tower, which Trump claims was wiretapped, during the presidential transition period.

"I was there in January, and there were all kinds of strange things going on -- all kinds of private security guards, people," Woodward said, before abruptly changing direction. "Anyway, I'm just saying, let's look at it. I would not close the case at this point. At the same time, I don't know why we're spending time on this or why Trump is spending time on it."

White House Press Secretary Sean Spicer made several false claims about Trump's tweets to redefine his specific wiretap charge as a broader type of surveillance, and Brzezinski challenged Woodward to say those statements were not lies.

"I think people cringe when the word lie is used, but what do we call it, then?" Brzezinski said.

Even when directly challenged, Woodward refused to call those claims lies.

"Well, there's a lot of dancing going on by the White House press secretary, and I agree -- the inconsistencies in this are endless," Woodward said. "At the same time, a lie is an intentional deception. It may turn out to be the case. In Trump's memoirs someday, he'll say, 'You know, I made that all up.' I don't know that yet."

Brzezinski asked him to clarify his suggestion that Obama might have wiretapped Trump Tower due to the large number of visitors.

"It almost seems fantastical," she said. "I understand you want to have an open mind, but what's your advice on covering this in the days and weeks to come? Let it go, because the president won't let it go?"

Woodward said reporters should continue to cover the president's backpedaling, which he said was just "part of the dance" that "just goes on forever and ever."

"Wiretapping the president meant surveillance -- okay," Woodward said, as Brzezinski cocked her head in bafflement. "Hypothetically, suppose you are the Russians and you want to find out what's going on in Trump Tower. You've got all these people coming in, as you've said. I think it would have been possible for anyone to monitor who these people were, what was going on."

Brzezinski cringed before finally cutting him off.

"That just has nothing to do with President Obama wiretapping Trump Tower," she said.

Woodward readily agreed, and continued his struggle to fit the president's accusations into a political narrative.

"There is an absurdity in all of this," Woodward said. "At the same time -- and this is the polarization that is taking place, that people look at this, lots of people, and say, 'It's a lie, it's unsupported.' Other people say, 'Oh no, we love Trump, he's our president, he can say anything, he can do anything' -- and I gravitate toward the middle on something like this."