'We are in crisis’: Morning Joe warns president’s Twitter meltdown has 'shaken this government to the core' 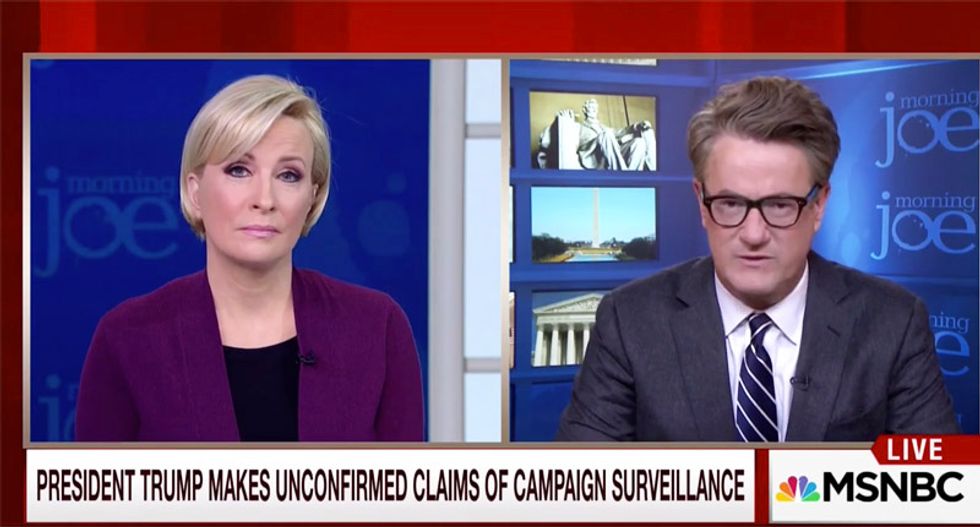 A deadly serious Joe Scarborough lambasted President Donald Trump on Monday morning over his outrageous accusations that President Barack Obama had his phones tapped at Trump Tower, saying the president's increasingly erratic behavior has put the country in "crisis."

On Sunday, MSNBC host Scarborough hammered at Trump, calling his accusations "sick," and there was more of the same at the top of his show Monday morning, saying the "presidential" Trump the country saw during his Tuesday speech is now gone.

"There was a belief that he [Trump] could turn the corner," Scarborough said. "What Donald Trump did on Saturday morning has shaken this government and the confidence of its people to the core. It is hard to overstate how reckless that tweet was. The 45th president of the United States accusing the 44th president of tapping his phones, personally tapping his phones, calling him sick."

"For people comparing this to the birther controversy, context is necessary," Scarborough continued. "It is one thing when a reality TV star accused a president of a sleazy conspiratorial theory. But when a president of the United States accuses another president, the context changes and it becomes dangerous."

"We are in crisis," he intoned.