'We don't want to take care away': Tom Price lies to cancer survivor saved by Obamacare 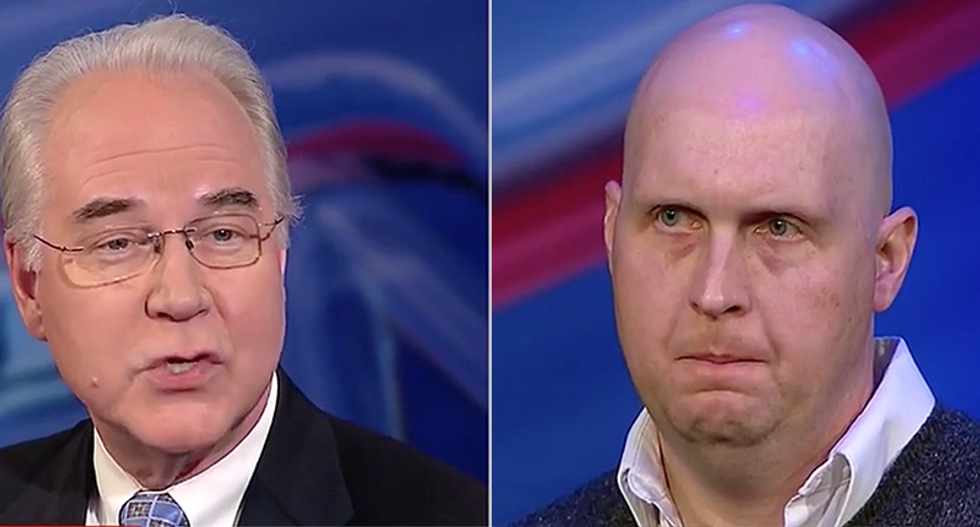 Brian Kline is the type of person who voted for President Donald Trump in November. He's a working-class man whose job is in retail, scoring him $11.66/hour. Thanks to Medicaid he's being treated for cancer.

During the CNN town hall with Health and Human Services Secretary Tom Price, Kline explained his situation and his struggles. "My question is pretty straightforward," Kline told Price. "Why do you want to take away my Medicaid expansion?"

Price's dispassionate answer seemed to fall flat on the audience.

"I took care of a lot of patients with cancer," Price explained about his 20 years as an orthopedic surgeon. "We don't want to take care away from anybody. What we want to make certain, though, is that every single American has access to the kind of coverage and care that they want for themselves."

Trumpcare proposes a full-stop to Medicaid expansion, the kind of health care that Trumpcare would cease if signed into law.

Price went on to slam Medicaid in general.

Klein, however, received life-saving treatment on that program that Price just dissed.

"So what we want to do is, one, reform the Medicaid system," he continued. "Make certain that individuals who are currently on Medicaid or are on the expansion are either able to retain that or move to a system that might be much more responsive to them through a series of advanceable, refundable credits."

He went on to say that he wants Americans to be able to get coverage that they choose for themselves, however, those choices do not include Obamacare as it is nor does it include a public option.