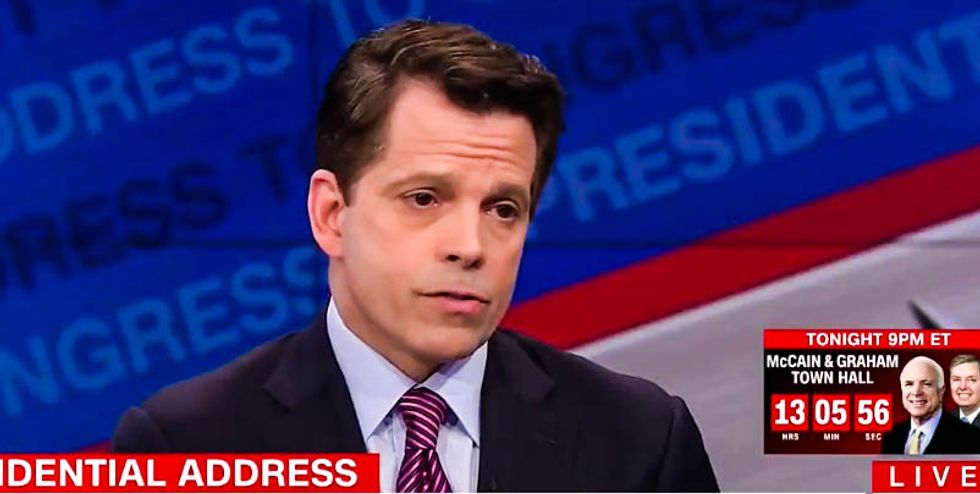 While President Donald Trump finally condemned the racist shooting of two Indian immigrants in Kansas City during his speech on Tuesday, CNN's Alisyn Camerota noted on Tuesday that the president doesn't normally wait more than a week to condemn similar shootings if they're committed by Muslims.

"He's not constantly condemning [hate crimes by white people]," Camerota pointed out. "There was silence after Kansas City. He didn't tweet about it. Some people felt if had it been a Muslim, had it been a Middle Eastern gunman instead of a white gunman, he would have immediately condemned it."

Scaramucci then replied that while the president condemns all such acts of violence, he doesn't want to talk too much about the ones such as the Kansas City shooting because he's afraid it will lead to more fear and civil unrest.

"The president is controlling the bully pulpit and the news cycle, and he doesn't want to overly discuss the stuff because you're worried that in itself will cause a fire," he replied. "You're trying to strike the right balance. You can agree with me or disagree with me. I do believe the president has consistently, and maybe not with the level of volume you'd like, but he has consistently and his administration has consistently denounced these acts of violence."

During his presidential campaign, President Trump would regularly post angry tweets about terror attacks allegedly committed by Muslims, often before there was any factual evidence that a Muslim was behind the attack.