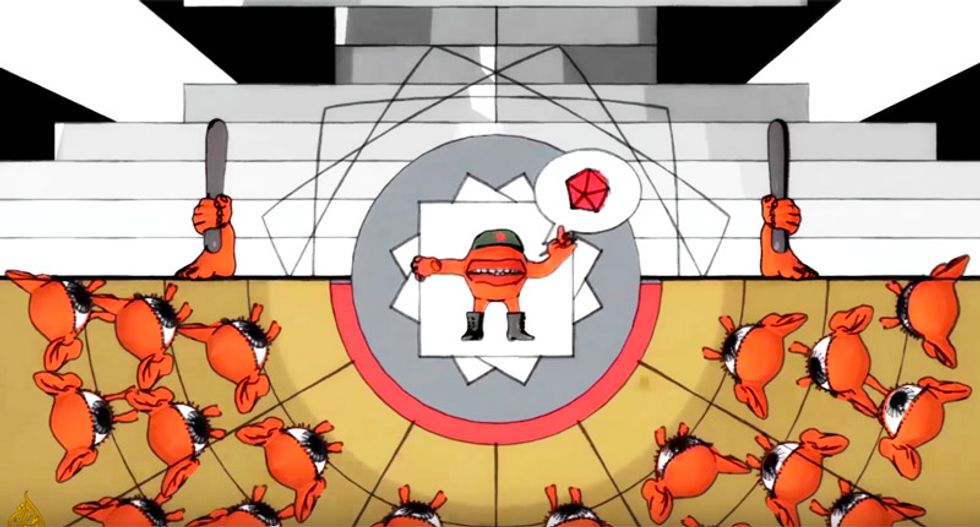 Now, in the age of fake news and alt facts, Democracy Now! co-founder Amy Goodman and animator Pierangelo Pirak have teamed up to give new life to the world renowned linguist and media analyst's famed work.

In 1988, "Manufacturing Consent" "blasted apart the notion that media acts as a check on political power," Goodman explains as a myriad of mouthy orange villains murmur ominously in a machine-like universe.

"That media inform the public, serve the public so that we can better engage in the political process," Goodman continues. "In fact, media manufacture our consent. They tell us what those in power need them to tell us ... so we can fall in line. Democracy is staged with the help of media that work as propaganda machines."

The cartoon then shows a one eye monster instructing his minions in an assembly line process to churn out news.

"The first has to do with ownership. Mass media firms are big corporations," she explains. "Often, they are part of even bigger conglomerates. Their end game? Profit. And so it's in their interests to push for whatever guarantees that profit."

Naturally, critical journalism must take second place to the needs and interests of the corporation.

"The second filter exposes the real role of advertising," Goodman tells us. "Media costs a lot more than consumers will ever pay. So who fills the gap? Advertisers. And what are the advertisers paying for? Audiences. And so it isn't so much that the media are selling you a product — their output. They are also selling advertisers a product — YOU."

The establishment then manages the media through the third filter.

"Manufacturing Consent" argues that "Journalism cannot be a check on power because the very system encourages complicity," Goodman points out.

"Governments, corporations, big institutions know how to play the media game," she notes. "They know how to influence the news narrative. They feed media scoops, official accounts, interviews with the 'experts'. They make themselves crucial to the process of journalism. So, those in power and those who report on them are in bed with each other."

In 1988, Chomsky and Herman offered a warning to journalists that has proven prescient in the age of Trump.

"If you want to challenge power, you'll be pushed to the margins," Goodman sums up. "When the media - journalists, whistleblowers, sources - stray away from the consensus, they get 'flak'."

This is the fourth filter.

"When the story is inconvenient for the powers that be, you'll see the flak machine in action discrediting sources, trashing stories and diverting the conversation," Goodman adds.

Hours before Friday's press gaggle, President Trump heavily criticized anonymous sourcing in his CPAC speech, even though he'd repeatedly used the same tactics to discredit President Obama during his time in office.

"To manufacture consent, you need an enemy — a target," Goodman revealed. "That common enemy is the fifth filter. Communism. Terrorists. Immigrants. A common enemy, a bogeyman to fear, helps corral public opinion."