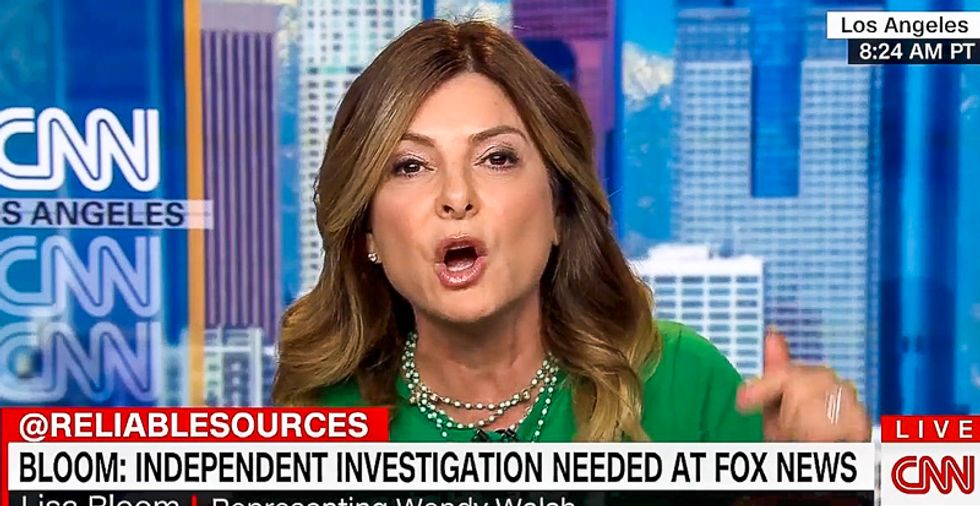 Attorney Lisa Bloom on Sunday reacted to reports that Fox News had paid out over $12 million to settle sexual assault allegations against host Bill O'Reilly by comparing the network to accused rapist Bill Cosby.

Over the weekend, The New York Times reported that no fewer than five women had received settlements from Fox News after accusing O'Reilly of sexual harassment.

"There needs to be an independent investigation of sexual harassment at Fox News," Bloom insisted to CNN's Brian Stelter. "How many women have to come forward? By my count, it's already been dozens and dozens of women who have been reported in reputable media to have come out against Roger Ailes and now Bill O'Reilly and others."

Bloom, who represents O'Reilly accuser Wendy Walsh, argued that an investigation done last year by Fox News attorneys was not sufficient to uncover wrongdoing within the company.

"How many women have to come forward, how many millions of dollars have to get paid before Fox News takes sexual harassment seriously?" she demanded. "In my opinion, this network is the Bill Cosby of corporate America. Women over and over again are driven out."

"Do women's careers mean anything at Fox News, do the laws of sexual harassment ever get enforced there? We don't see of that."

Pointing to a statement from Fox News, Stelter noted that "O'Reilly feels that he's a vulnerable target."

"Oh, boo hoo!" Bloom quipped. "It's so hard to be Bill O'Reilly and have woman after woman come forward -- some of them, by the way, reportedly with recordings of what he said to them, what he was doing in the shower, which I probably can't say on your show."

"It's not like people are accusing him of 'I slipped and fell on your property and I'm suing you.' It's always sexual harassment. And you mean to tell me, woman after woman for 12 or 13 years, they've all conspired together, women who don't know each other, to accuse him of sexual harassment? How many women have to come forward before he starts to take this seriously and stops portraying himself as a victim?"