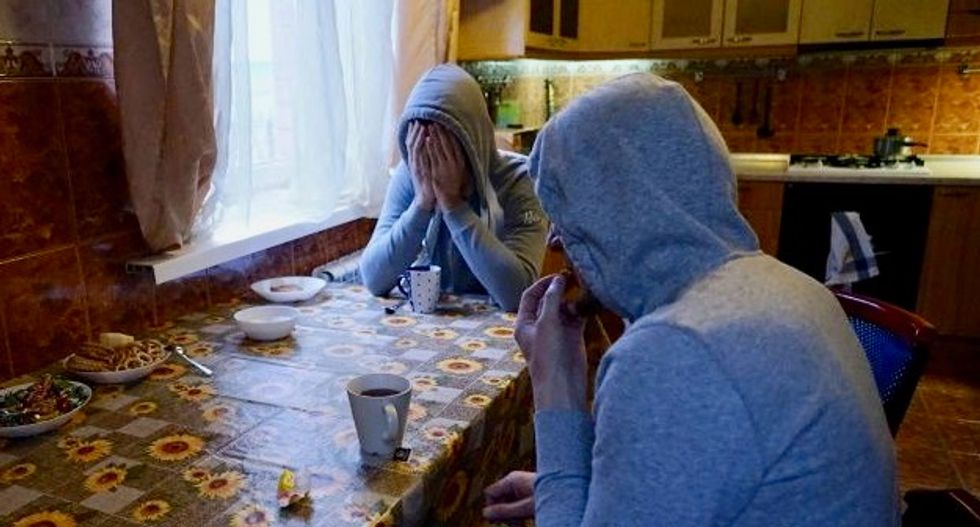 Ilya looks tired and drawn. After being beaten and tortured by men in military uniform in Russia's Chechnya region, he fled to Moscow but still fears for his life -- because he is gay.

He is now hiding out in a small house on the edge of Moscow with five other Chechens after they escaped what they say is a brutal campaign against gay men by authorities in the Muslim region of Russia's North Caucasus.

All declined to give their real names for fear of someone recognising them and tracking them down.

"If any of my relatives realises I'm gay, they won't hesitate a minute before killing me," another of the men, 28-year-old Nortcho, told AFP.

"And if they don't do it, they will get killed themselves for failing to uphold the family honour."

While casual homophobia is common in Russia, the problem is particularly acute in conservative Chechnya, where homosexuality is taboo and seen in many families as a moral failing that should be punished by death.

In late March, the Novaya Gazeta newspaper -- known for critical reports on Ramzan Kadyrov, Chechnya's iron-fisted ruler for the last decade -- published a shocking report that gay men had been rounded up.

The newspaper said the authorities had detained more than 100 gay men and urged their families to kill them to "wash clean their honour." At least two had been killed by relatives and a third died after being tortured, it reported.

The accusations were taken all the more seriously since the security forces controlled by Kadyrov -- a fierce loyalist of Russian President Vladimir Putin -- have long been accused by rights activists of carrying out kidnappings and beatings of his opponents.

Asked to comment on the Novaya Gazeta report, Kadyrov's spokesman claimed that such punitive treatment of gay men in Chechnya was impossible since they "do not exist" in the region.

Kadyrov on Wednesday denied that any homosexuals had been arrested, saying "provocative articles about Chechnya (have) reported so-called arrests."

"It's even embarrassing to talk about it. It's said there have been what are called arrests, murders, (newspapers) have even given the name" of one victim, he said. "But he is alive, in good health and is at home."

The Moscow branch of a Russian NGO called the LGBT Network is helping Chechens to flee the region, and receives "three or four requests for help each day," said the branch's leader Olga Baranova. Nearly 20 people at risk have already moved to Moscow, she told AFP.

While Ilya is now more than 1,800 kilometres (1,100 miles) from the Chechen capital of Grozny, he still jumps up each time a car drives close by the house, which is surrounded by a fence.

"By helping me, the Network has handed me a reprieve -- but they'll find me in the end," he says quietly.

In October he was taken into a field and beaten by three men in military uniform. A huge scar runs along the side of his jaw.

"They filmed everything. They told me it would end up on social media unless I paid 200,000 rubles ($3,650). I borrowed the money and paid it," he said, speaking hoarsely.

But after that he had to flee to Moscow anyway.

"Some soldiers came to see my mother and told her I was gay," he said. "I'm terrified. I haven't been able to sleep since I left."

Another man who refused even to give an alias said he left Chechnya two weeks ago. He said he too had been unable to sleep since, haunted by the fear that his wife and his child would find out he is gay.

In March he was held "in an unofficial prison" for a week, the man said.

"There were other gay men in the cell. Some of them had been beaten up," he recalled. "When I was released, I realised that meant I should leave as swiftly as possible."

Reports of the abuses have drawn international condemnation, as activists have accused the authorities in Russia of turning a blind eye for fear of upsetting Kadyrov in a region where Moscow fought two bloody separatist wars.

US Ambassador to the United Nations Nikki Haley said Monday that she was "disturbed" by the reports.

Tanya Lokshina of Human Rights Watch said that in her view: "It will only take a call from the Kremlin to Kadyrov for the arrests to stop."

Russia's Prosecutor-General's office formally opened an investigation on Monday, but Kremlin spokesman Dmitry Peskov on Thursday downplayed the reports, saying there had been "no confirmation" of violence and arrests.