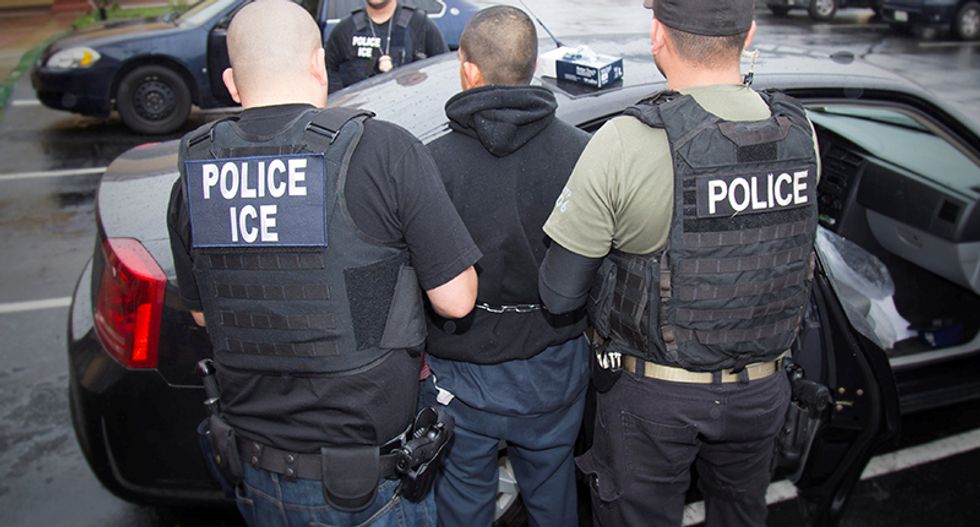 In the first months of Donald Trump's presidency, immigration arrests by the U.S. Immigration and Customs Enforcement agency (ICE) have spiked sharply as newly empowered agents extend their arrests beyond undocumented immigrants with criminal histories to include any undocumented person, regardless of their criminal record or lack thereof.

The Washington Post's Maria Sacchetti reported Sunday night that ICE arrested 21,362 immigrants -- most of whom had criminal convictions -- from January through mid-March. Statistics obtained by the Post said that only 16,104 arrests were made during the same period last year, meaning arrests have risen 32.6 percent.

"Arrests of immigrants with no criminal records more than doubled to 5,441, the clearest sign yet that President Trump has ditched his predecessor’s protective stance toward most of the 11 million undocumented immigrants in the United States," the Post said.

The increased risk of arrest has created a climate of fear in the undocumented community. Already, immigrant advocates say, "the unbridled enforcement has led to a sharp drop in reports from Latinos of sexual assaults and other crimes in Houston and Los Angeles, and terrified immigrant communities across the United States."

Prosecutors say that the presence of ICE officers at state and local courthouses makes it harder to pursue cases and interferes with the course of justice.

“My sense is that ICE is emboldened in a way that I have never seen,” said Dan Satterberg -- the top prosecutor in Washington state’s King County -- to the Post. “The federal government, in really just a couple of months, has undone decades of work that we have done to build this trust.”

In a statement, ICE spokeswoman Jennifer Elzea said that the agency "focuses its enforcement resources on individuals who pose a threat to national security, public safety and border security. However, as [Homeland Security] Secretary [John F.] Kelly has made clear, ICE will no longer exempt classes or categories of removable aliens from potential enforcement.”

The spike in arrests of undocumented immigrants with no criminal records is particularly troubling, Sacchetti wrote.

"ICE’s Atlanta office arrested the most immigrants who had never committed any crimes, with nearly 700 arrests, up from 137 the prior year. Philadelphia had the biggest percentage increase, with 356 noncriminal arrests, more than six times as many as the year before," she said.

The two busiest ICE field offices were in Dallas, TX and Atlanta, GA. Overall, thus far in 2017, deportations are down, but only because it takes time to process detainees through the system.

“It’s all got to do with the president,” said Republican Miami-Dade County Mayor Carlos A. Gimenez. “Most of it has to do with politics. It’s sad.”

After seeming to soften on immigration somewhat, earlier this year the president issued executive orders making all undocumented immigrants eligible for deportation.

White House Press Secretary Sean Spicer said in February that the “shackles” were off immigration and border agents.

“I think the instruction is, ‘Go about your business in terms of apprehending immigrants,” said Joanne Lin, senior legislative counsel with the ACLU. “It’s wherever they can find them.”