'If I have to get a lawyer, I will': Trump voter upset the border wall will put her house on Mexico side 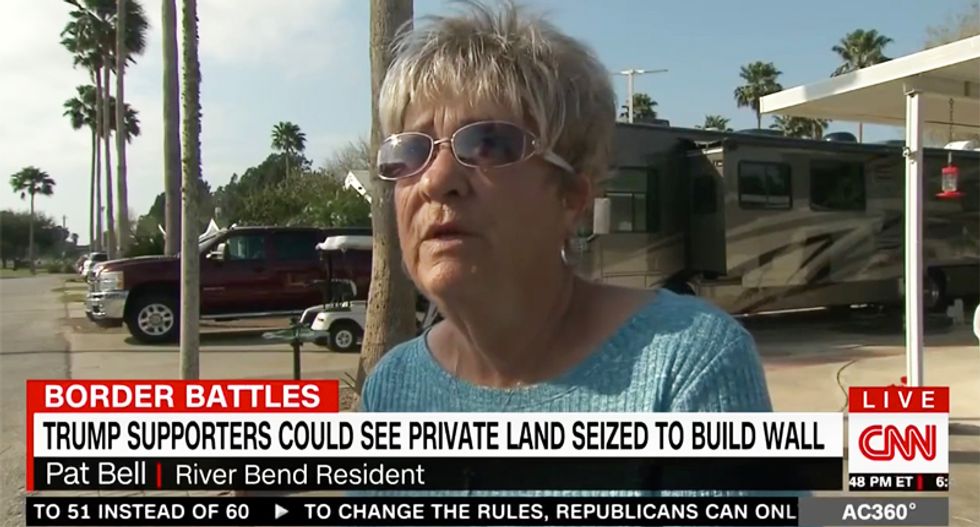 Trump supporters in Texas are coming to the realization that their vote for the president may force some of them out of their homes for less than they are worth, with others finding out that -- if they stay -- they'll be living in Mexico if his wall is built.

As part of a CNN special report on the impact the wall between the U.S. and Mexico will have on border dwellers in the state that went overwhelmingly for President Donald Trump, the network found there is already an extensive history of government lawsuits filed to take property from homeowners. With Trump's wall planned for the entire border, some of his supporters are now saying they will fight his administration in the courts.

According to one family who had their farm cut in half -- part of it in the U.S., part of it in Mexico --  they are still stunned that government was able to take their property 10 years ago.

"I was very angry, I just kept saying, how can they do that? How is that possible in the United States that they can do this?" D'Ann Loop of Brownsville recalled. "They put up a fence in front of our land and then keep us in here -- lock us in. I didn't understand. I was very -- I was floored and flabbergasted."

According to Loop, all of their property is now on the Mexico side after losing in court.

"It left us no property on the U.S. side of the border wall, including my house," she explained. "Everything was behind -- on the Mexican side of the U.S. border fence," with her husband adding they enter the U.S. through a locked gate

"You punch your code in or you come behind the border wall, there is a feeling of isolation," Ray Loop  explained.

With hundreds of additional miles of Trump's proposed wall expected to be built in along the Texas border,  thousands of land owners may be be forced to sell their property to the government or stay and live in changed circumstances.

According to Pat Bell of River Bend, she voted for Trump but never supported his border wall plan, and now she may have to get a lawyer because her home will no longer be in Texas.

"Absolutely I would go to the people who are in charge and, you hate to say I would get a lawyer, but if it comes to that issue, you would," she explained.