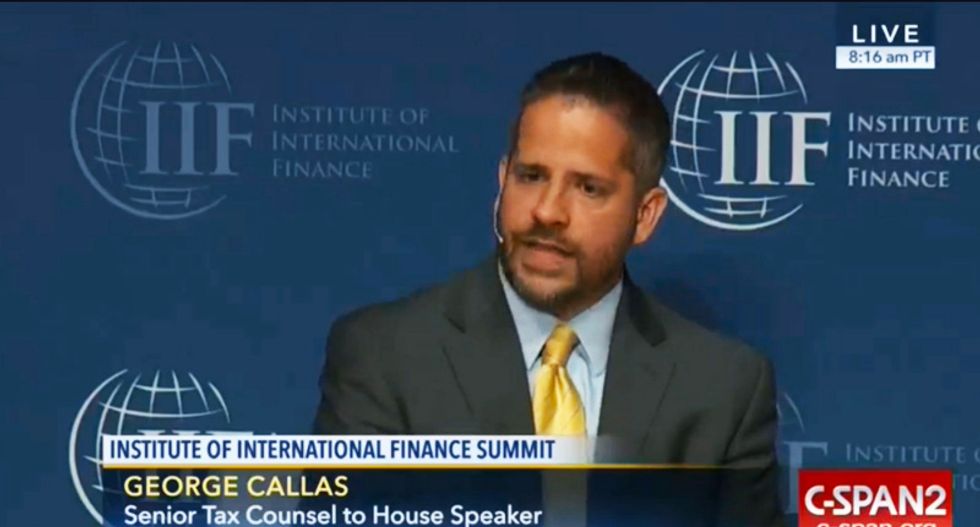 With President Donald Trump working overtime this week to come up with a tax cut wish list for Congress -- including a massive cut to the top corporate tax rate -- the senior tax counsel for House Leader Paul Ryan (R-WI) declared Trump's plans dead before it has ever even been submitted.

According to a report from the Wall Street Journal, Trump's proposal would slash the top corporate rate down to 15 percent and would primarily benefit, "professionals that organize themselves in an LLC or partnership. Doctors, lawyers, consultants, lobbyists."

Speaking at an international finance summit last week, Ryan's tax law specialist George Callas called out Trump's plan for a massive tax cut without offsetting cuts to pay for it a "magic unicorn."

“A plan of business tax cuts that has no offsets, to use some very esoteric language, is not a thing,” Callas patiently explained to the panel and attending crowd. “It’s not a real thing. And people can come up with whatever plans they want. Not only can that not pass Congress, it cannot even begin to move through Congress on day one. And there are political reasons for that. No. 1 of which is, members wouldn’t vote for it. But there are also procedural, statutory procedural, legal reasons why that can’t happen.”