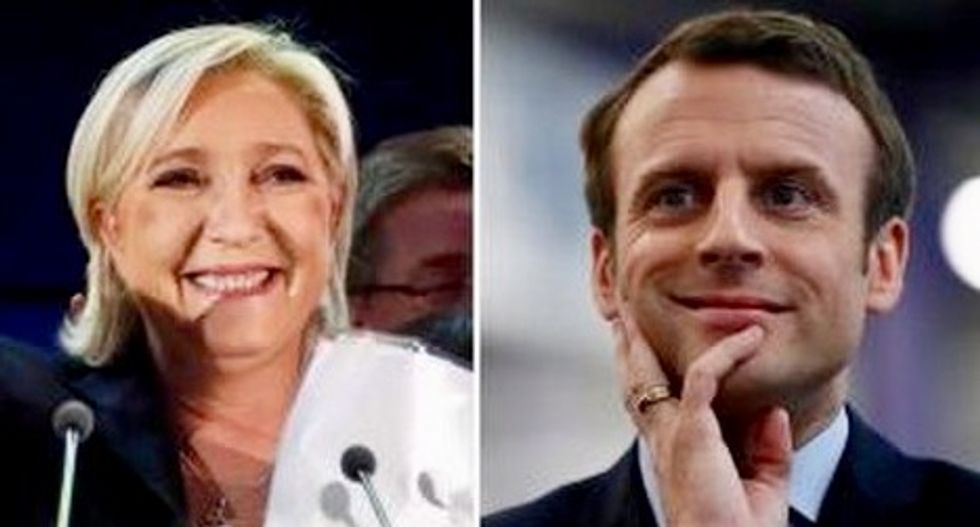 French far-right presidential candidate Marine Le Pen upstaged her rival, pro-business centrist Emmanuel Macron, Wednesday by making a surprise visit to an under-threat factory as he was visiting the rustbelt town where it is based.

While Macron had arranged to meet workers' representatives from the factory without actually visiting the site, Le Pen turned up unannounced at the Whirlpool appliance factory in the northern city of Amiens.

She posed for selfies with workers outside the factory, which is threatened with outsourcing to Poland.

Macron was visiting Amiens after facing criticism for not taking the fight to the far-right leader following his victory in Sunday's first round of the election.

He is also due to hold a rally in Arras, a city in the economically depressed north where Le Pen topped first-round voting.

"Everyone knows what side Emmanuel Macron is on -- he is on the side of the corporations," Le Pen said, as Macron met Whirlpool union delegates at the local chamber of commerce.

"I am on the workers' side, here in the car park, not in restaurants in Amiens," Le Pen said, taunting her rival.

He retorted on Twitter that she had spent "10 minutes with her supporters in a car park in front of the cameras" whereas he had spent "an hour and a half with union representatives and no media."

"Come May 7, everyone will make their choice," he added.

Le Pen, 48, was first out of the blocks in campaigning for the run-off, hitting the trail and accusing the pro-EU centrist Macron of representing "runaway globalisation" and lacking love for his country.

Macron's visit comes as a Harris Interactive poll showed 52 percent of the French believe Macron, a pro-EU candidate, botched the start of campaigning for the May 7 run-off in France's presidential vote.

After winning Sunday's contest with 24.1 percent to Le Pen's 21.3 percent, he gave an exuberant victory speech followed by a high-profile celebration at Paris bistro La Rotonde bistro, drawing criticism from some quarters.

Socialist Party boss Jean-Christophe Cambadelis told French radio: "He was smug. He wrongly thought that it was a done deal. It's not a done deal."

President Francois Hollande appeared on Tuesday to admonish his former economy minister for not taking the fight to Le Pen immediately after the first round.

Macron shot back Tuesday, saying: "I will continue to fight for two weeks... I will defend the progressive camp to the end."

Since securing her berth in the run-off, Le Pen has turbo-charged her campaign with a string of appearances and statements, leaving her opponent on the back foot.

At the crack of dawn on Tuesday she was at the sprawling Rungis food market outside Paris, taking aim at what she said was Macron's desire for "total deregulation, total opening up, total free trade".

In contrast, her opponent has huddled in strategy meetings over June legislative elections that would determine the shape of a future Macron government.

Le Pen will hold a rally in the Riviera city of Nice on Thursday, a bastion of France's right that was targeted by a jihadist-inspired truck attack that killed 86 people in July.

Le Pen has called for France to take back control of its borders from the European Union and deport all foreigners on a terror watchlist, accusing Macron of being soft on terrorism.

Still, polls suggest that Macron will trounce Le Pen in the run-off with a margin of some 20 points.

But after the political shocks of Britain's vote to leave the European Union and Donald Trump's unlikely ascent to the White House, analysts say a late surge by Le Pen is still possible.

A key factor in the race is which candidate the supporters of Communist-backed Jean-Luc Melenchon, who finished in fourth place with 19.58 percent on Sunday, will back in the run-off.

Melenchon faced criticism after he failed to urge people who voted for him to get behind Macron in the run-off as part of the so-called "republican front", the decades-old French tactic of closing ranks to block the far-right.

Melenchon's France Insoumise (Unbowed France) movement is holding a consultation on which candidate to back in the second round, but his spokesman Alexis Corbiere said the eliminated candidate would not express his own preference.

Le Pen said Monday she was quitting temporarily as head of her National Front (FN) in order to concentrate on the campaign.

The move was seen as largely symbolic but one that would loosen her association with the FN, the party founded by Le Pen's father, Jean-Marie, notorious for anti-Semitic and xenophobic remarks.