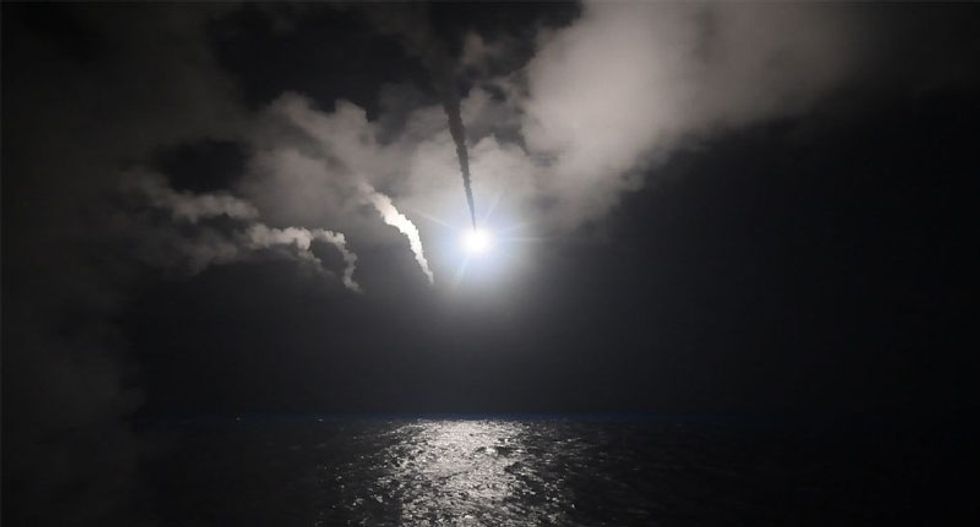 Image released by the US Navy shows the USS Porter launching cruise missiles at a Syrian airbase from the Mediterranean early on April 7, 2017 (AFP Photo/Ford WILLIAMS)

Moscow slammed the US strike on a Syrian airbase Friday as "aggression against a sovereign state", and suspended a bilateral agreement to help avoid clashes in the skies over the war-torn country.

"President Putin considers American strikes on Syria aggression against a sovereign state in violation of international norms, and under an invented pretext," said the statement by the Kremlin press service posted on the official website.

US President Donald Trump ordered a military strike on a Syrian air base at 0040GMT, in retaliation for what he said was a "very barbaric attack" Tuesday that is suspected to have contained a nerve agent.

Moscow has been flying a bombing campaign in support of Syrian President Bashar al-Assad's forces since September 2015 and on Wednesday said it would continue to back the regime.

The Russian foreign ministry announced the suspension of a memorandum signed with the US in October 2015 which set up a hotline to avoid clashes between their air forces in Syrian airspace as they carried out separate bombing campaigns.

"We call upon the UN Security Council to hold an extraordinary meeting to discuss the situation," the ministry said in a statement, calling the strike "thoughtless."

Russia had sought to deflect blame from Assad over the incident, claiming Syrian jets struck a rebel arms depot housing "toxic substances" and denying that the regime has access to any chemical weapons.

"The Syrian army does not have any chemical weapon stockpiles," the Kremlin statement said, accusing Washington of trying to "divert attention of the international community from the many civilian casualties in Iraq."

"The fact of destruction of all chemical weapon stockpiles of the Syrian armed forces was recorded and confirmed by the (Organisation for the Prohibition of Chemical Weapons)."

"This step by Washington inflicts considerable damage to US-Russia relations, which are already in a lamentable state," the Kremlin said.

A White House official said 59 precision-guided Tomahawk missiles hit the Shayrat airfield, from where the US believes the attack was launched.

The Syrian army said that six people were killed and serious damage caused by the strike.