‘No different than Trump with Putin’: Howard Dean says Tulsi Gabbard should resign for defending Assad 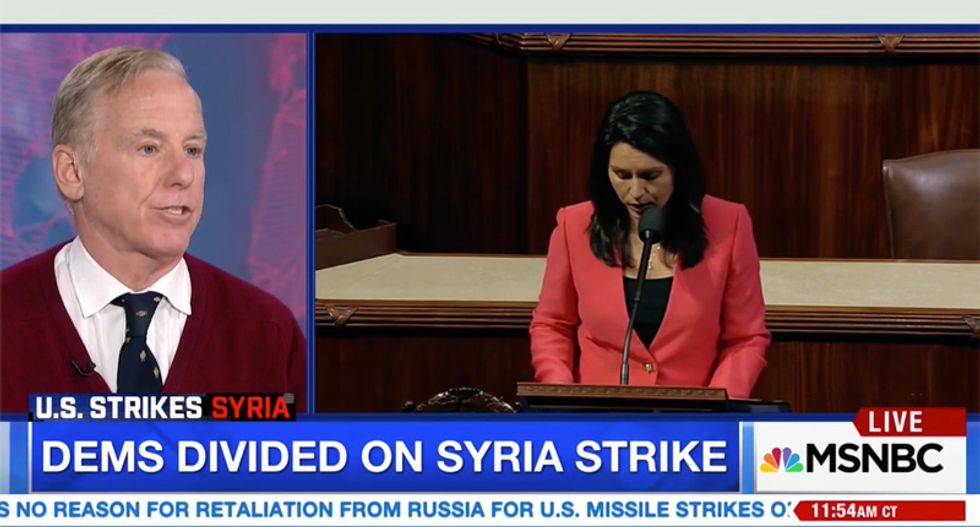 A furious Howard Dean blasted Rep. Tulsi Gabbard (D-HI) on MSNBC Sunday morning for her defense of Syrian President Assad, with Dean saying the Hawaiian lawmaker should resign from Congress.

"How do you respond to Tulsi Gabbard?" host Witt asked Dean.

"I think it's outrageous," a terse Deann responded. "There's a long well-known history, both in our intelligence community, Amnesty International and  Doctors Without Borders. Every single one of these agencies has said that Assad is using chemical weapons. He's a barbarian, he's murdered half a million of his own people."

"I can't imagine how you could make a statement like that, especially being on the Foreign Relations Committee," he continued. "I can't imagine what could possibly be going through her head."

"To that end, you put a tweet out, I'm going to read it to everybody, okay? " Witt responded before quoting Dean on Twitter writing, "This is a disgrace. Gabbard should not be in Congress," along with a link to Gabbard's comments.

"All she's asking for is proof though," Witt pressed.

"If you're on the Foreign Relations Committee and you haven't seen the proof in the last five and a half years, there's something the matter with you," Dean shot back. "I am tired of people making excuses. This is no different than Trump making excuses for Putin. We've had enough of this."

"Let's talk about facts and the fact is, Assad is a butcher, a murderer, and he has repeatedly over the past few years used chemical weapons on his own people! What more do you want?" Dean demanded.