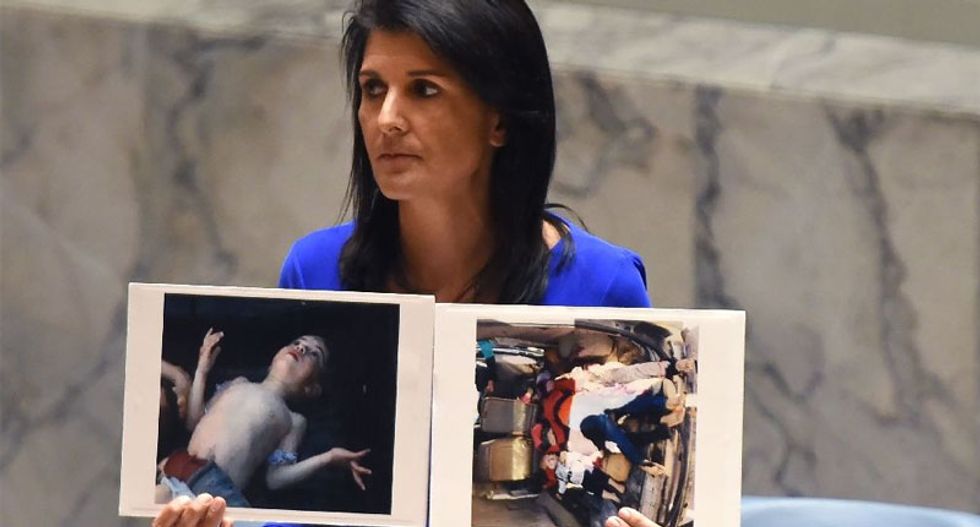 US Ambassador to the UN Nikki Haley holds photos of victims as she speaks as the UN Security Council meets in an emergency session at the UN on April 5, 2017, about the suspected chemical attack in Syria (AFP Photo/TIMOTHY A. CLARY)

Syria's regime and Russia hit back Thursday at accusations that Damascus was behind a deadly chemical weapons attack, as pressure built for international action over what Washington called an "affront to humanity".

France said it was determined to pursue a UN Security Council resolution to investigate dozens of civilian deaths in a northwestern Syria town, which Turkey blamed on a "chemical attack" by the Damascus government.

At least 86 people were killed early on Tuesday in rebel-held Khan Sheikhun, and dozens more have received treatment for convulsions, breathing problems and foaming at the mouth.

World powers have pointed the finger at the government of Bashar al-Assad, but Foreign Minister Walid Muallem repeated the government's denial on Thursday.

"The Syrian army has not, did not and will not use this kind of weapons -- not just against our own people, but even against the terrorists that attack our civilians with their mortar rounds," he said.

Longtime ally Russia described the events in Khan Sheikhun as a "monstrous crime," but said there was no "realistic, verified information."

"Any data that the American side or our colleagues in other countries could have cannot be based on objective materials or evidence," Kremlin spokesman Dmitry Peskov told reporters.

At least 32 people were transferred across the border into Turkey for treatment, and Ankara said autopsies performed on three people who died in Turkish hospitals confirmed chemical weapons had been used.

An AFP correspondent in Khan Sheikhun on Wednesday said the town was reeling, with dead animals lying in the streets and residents still shell-shocked after watching their entire families die.

"Nineteen members of my family were killed," 28-year-old Abdulhamid said in the town, surrounded by mourning relatives.

"We put some masks on but it didn't do anything... People just started falling to the ground," said Abdulhamid, who lost his twin children and wife in the attack.

After an emergency session of the UN Security Council on Wednesday, Western diplomats are expected to push for a vote as early as Thursday on a resolution demanding an investigation of the suspected attack.

"These crimes must not go unpunished," Ayrault told CNEWS television.

"It's difficult because up to now every time we have presented a resolution, there has been a veto by Russia and sometimes by China... but we must cooperate because we need to stop this massacre," he added.

If confirmed as an attack, it would be among the worst incidents of chemical weapons use in Syria's civil war, which has killed more than 320,000 people since it began in March 2011.

It has also prompted an about-face from US President Donald Trump, who in 2013 urged then-president Barack Obama not to intervene against Assad after a major suspected chemical attack.

Senior US officials had also recently suggested it was no longer a priority that Assad be removed from power.

Trump described the alleged attack as an "affront to humanity" and warned it had changed his view of Assad.

"I will tell you, it's already happened, that my attitude towards Syria and Assad has changed very much," he told reporters at a joint White House news conference with Jordan's King Abdullah.

"It crossed a lot of lines for me," he said, alluding to Obama's failure to enforce his own 2013 "red line" on the use of chemical weapons in Syria.

As she held up pictures of lifeless children at the UN on Wednesday, US ambassador Nikki Haley warned of unilateral action if the UN failed "in its duty to act collectively."

The draft UN resolution backs a probe by the Organization for the Prohibition of Chemical Weapons (OPCW) and demands Syria provide information on its operations.

On Thursday, Muallem said such an investigation "must guarantee that it is not politicised, that it has broad geographic representation and that it is launched from Damascus, not Turkey."

British ambassador to the UN Matthew Rycroft told reporters he hoped council members would agree on a draft resolution by Thursday, but vowed to press for a vote regardless.

Failure to agree on a compromise text could prompt Russia to use its veto to block the draft resolution, which Moscow has done seven times to shield Syria.

Syria officially relinquished its chemical arsenal and signed the Chemical Weapons Convention in 2013 to avert military action after it was accused of an attack outside Damascus that killed hundreds.

But there have been repeated allegations of chemical weapons use since.

Doctors said victims showed symptoms consistent with the use of a nerve agent such as sarin -- suspected to have been used by government forces in the 2013 attacks.