'Shut up so I can apologize!': Melissa McCarthy kills it as Sean Spicer the White House Easter Bunny 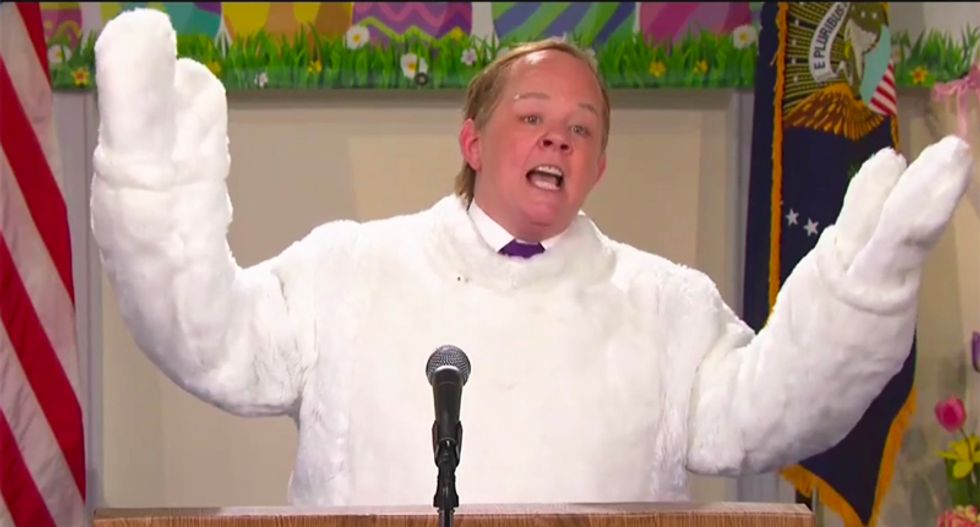 Melissa McCarthy reprised her role as White House Press Secretary Sean Spicer on this week's Saturday Night Live and did it while dressed as a giant Easter Bunny.

McCarthy as Spicer began by telling a group of assembled children to sit down and shut up, "I'm sweating my Easter eggs off in this thing."

"Shut up so I can apologize," Spicer said. "You all got your wish this week, didn't ya? Spicey finally made a mistake."

In defending President Donald Trump's decision to bomb Syria, Spicer said that "Syria's leader, what's his name, what's his name, I've got his name...Bazooka Phylicia Ahmad Rashad wasn't like Hitler, who never used chemical weapons, and everybody freaked out. They were like 'Boo-hoo, what about the Holocaust centers?' And yeah, I know they're not called the Holocaust centers. Duh. I know that. I'm aware. I clearly meant to say concentration clubs, okay? Let it drop!"

He then proceeded to perform the Easter story with puppets before wishing everyone a happy Easter and telling them to eat as much candy as they want "because it's probably our last Easter on Earth."