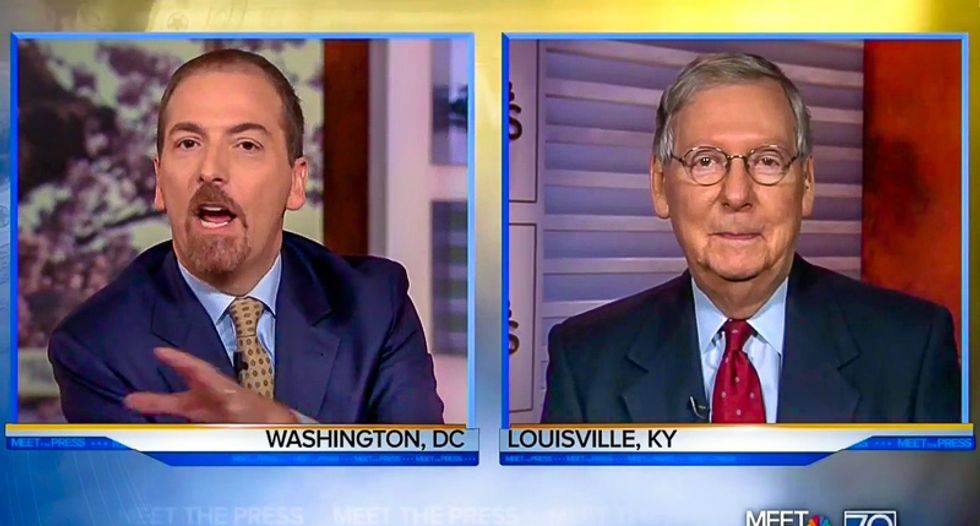 "The tradition had been not to confirm vacancies in the middle of a presidential [election] year," McConnell told Meet the Press host Chuck Todd. "You'd have to go back 80 years to find the last time it happened... Everyone knew, including President Obama's former White House counsel, that if the shoe had been on the other foot, [Democrats] wouldn't have filled a Republican president's vacancy in the middle of a presidential election."

"Look, we litigated that last year," the Majority Leader stuttered. "The American people decided that they wanted Donald Trump to make the nomination, not Hillary Clinton."

McConnell argued that Democrats should focus on the issue at hand, the confirmation of Neil Gorsuch, Trump's Supreme Court pick.

"There's no rational reason, no basis for voting against Neil Gorsuch," McConnell opined.

"You say it's been litigated, the Garland situation," Todd replied. "For a lot of Senate Democrats, they're not done litigating this... What was wrong with allowing Merrick Garland to have an up or down vote?"

"I already told you!" McConnell exclaimed. "You don't fill Supreme Court vacancies in the middle of a presidential election."

"Should that be the policy going forward?" Todd interrupted. "Are you prepared to pass a resolution that says in election years any Supreme Court vacancy [will not be filled] and let it be a sense of the Senate resolution, that says no Supreme Court nominations will be considered in any even numbered year? Is that where we're headed?"

"That's an absurd question," McConnell complained. "We were right in the middle of a presidential election year. Every body knew that either side -- had the shoe been on the other foot -- wouldn't have filled it. But that has nothing to do with what we're voting on this year."