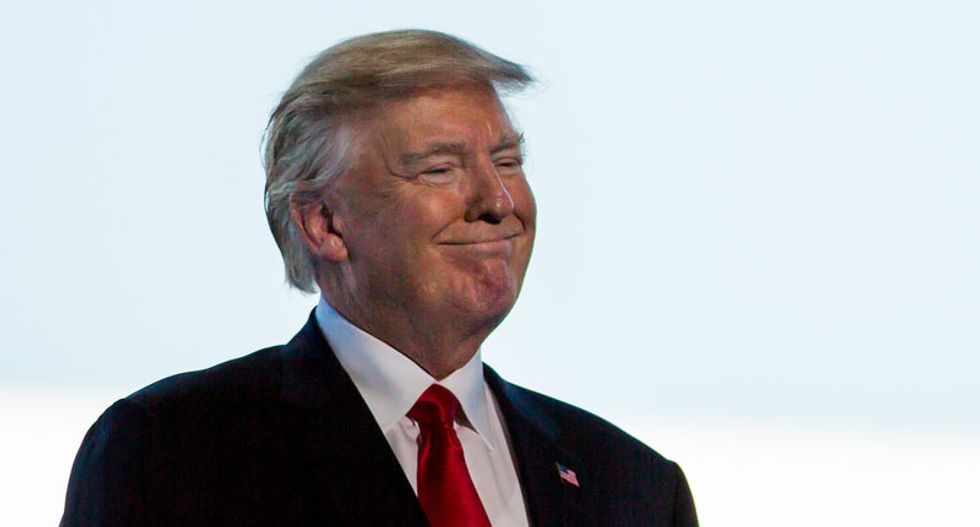 President Donald Trump is creating security concerns over his visit to meet with the Queen of England because he wants to ride in her golden carriage.

According to the Times of London,  the White House has let Buckingham Palace officials know that Trump is very interested in being part of a carriage procession up the Mall during his October visit.

British security services are balking, saying the president's wish is presenting them with "monster" problems is helping to keep the U.S. president safe.

London Metropolitan Police have already been making plans for Trump's visit, expecting tens of thousands of protesters to descend on the procession route. Their preference is for Trump to make use of a bullet and bomb-proof car that was previously used by former President Barack Obama.

“The vehicle which carries the president of the United States is a spectacular vehicle. It is designed to withstand a massive attack like a low-level rocket grenade," a police source explained. "If he’s in that vehicle he is incredibly well protected and on top of that it can travel at enormous speed. If he is in a golden coach being dragged up the Mall by a couple of horses, the risk factor is dramatically increased."

“There may well be protections in that coach such as bulletproof glass, but they are limited. In particular it is very flimsy," the source continued. "It would not be able to put up much resistance in the face of a rocket propelled grenade or high-powered ammunition. Armour-piercing rounds would make a very bad show of things.”

According to the report, the local police are already working with Secret Service advance teams and will be providing elite anti-terrorism teams to help protect Trump.

A new report from the Arizona Republic sheds more light on the coalition of voters who sunk Trump-backed Kari Lake's hope of becoming Arizona's next governor.

Essentially, the newspaper found that a significant number of Republican voters in the state crossed over to back Democrat Katie Hobbs in this year's elections, and they also helped put nails in the coffins of fellow MAGA candidates Blake Masters and Mark Finchem.

An anti-LGBTQ activist who lost her write-in campaign this month for a county clerk position in Utah previously resigned as a teacher over misconduct involving her relationships with students.

Patricia Kent, the founder of the right-wing Liberty Action Coalition, resigned from her teaching job in 1996 over her inappropriate and overly familiar relationships with female students, but more recently she has claimed drag shows were grooming children for immoral purposes, reported The Salt Lake Tribune.

Democrats are putting together a network of outside groups to respond to looming investigations of President Joe Biden, his family and his administration by the incoming House Republican majority.

House minority leader Kevin McCarthy and Rep. Jim Jordan, who is likely to become chairman of the Judiciary Committee, have already promised investigations of Biden and various cabinet agencies, including the Justice Department, to "frame" the 2024 election campaign, and Democratic groups are preparing to fight back, reported NBC News.