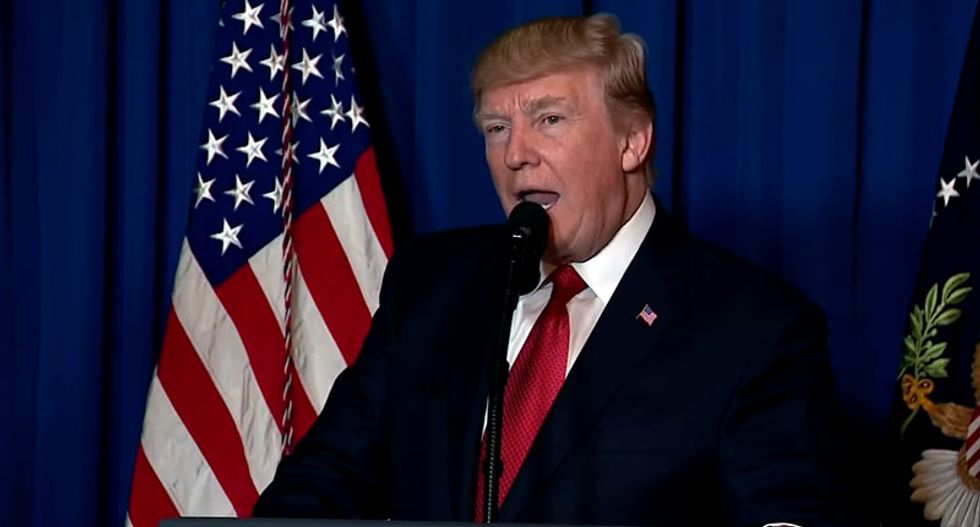 The United States’ unilateral missile strikes against a Syrian airforce base are a dramatic escalation of its participation in that country’s civil war. The US government has attacked a Syrian government asset for the first time.

The attack also marks Donald Trump’s first major foreign policy test as US president. It represents a 180-degree shift from his previous position of opposing intervention in Syria. And the sudden about-face sends a worrying signal for how his administration may handle future crises in international relations.

On Thursday, the US unilaterally launched strikes against the al-Shayrat airforce base in Homs. This base primarily houses Mig-23 and SU-22 strike craft and Mig-25 interceptors.

The attack consisted of 59 sea-launched Tomahawk cruise missiles, which targeted airframes and supporting infrastructure. It reportedly led to casualties among Syrian military personnel.

Unlike the actions of his predecessor, Barack Obama, prior to the 2012 Libya intervention, Trump sought no international legal sanction for the strike.

The attack has been justified as a punitive response to the Syrian military’s likely use of sarin chemical nerve agents against civilians in Idlib province. This led to at least 70 deaths and drew worldwide condemnation.

The Idlib incident was a much smaller repeat of a major sarin deployment in the Damascus suburb of Ghouta in 2013. That attack led to hundreds of civilian deaths – many of them children.

The Ghouta atrocity led the US to the brink of war with Syria; the Syrian government was alleged to have crossed Obama’s infamous “red line”. Ultimately, however, diplomatic manoeuvring by senior US, Russian and Syrian officials de-escalated the situation. They were able to negotiate the apparent dismantling of Syria’s chemical weapons program.

Recent events, however, suggest this dismantling was not as extensive as previously thought.

What’s concerning is how the strikes have been rationalised. Trump has described the strikes as aimed at protecting a “vital national security interest”. However, this appears to contradict one of the fundamental themes that buoyed Trump’s rise to power.

Throughout the 2016 presidential campaign, Trump emphasised the need to embrace a transactional approach to foreign relations that placed little value on human rights.

The then-presidential candidate was criticised for appearing to be open to accommodating the anti-human-rights predilections of authoritarian rulers provided they served US economic and security interests.

Trump condemned the Obama administration’s response to the Ghouta attacks when strikes were under consideration. He explicitly and repeatedly indicated that, as president, he would adopt a non-interventionist position in Syria in spite of the humanitarian crisis.

The President must get Congressional approval before attacking Syria-big mistake if he does not!
— Donald J. Trump (@Donald J. Trump)1377903751.0

However, the strikes clearly contradict this position. Trump now claims intervention was a matter of “vital national security interest”.

This view is itself dubious and inconsistent with a conflict where the US has largely turned a blind eye to half-a-million dead Syrian civilians over the past six years. The US has increasingly contributed to this toll in recent weeks.

A point of concern for some has been Trump’s inability to fully grasp the consequences of his actions and his general reflexiveness to the conditions he confronts. As with many of his domestic policy promises on the campaign trail, Trump’s Syria stance appears to be a flip-flop.

Shifts in domestic and foreign policy are generally to be expected and afforded some latitude as a candidate transitions to the presidency. But the degree and speed of Trump’s foreign policy switches are of serious concern.

Unpredictability in international relations has particularly high stakes. It can lead to rapid escalations, collapse of long-term relationships and partnerships, and even war.

This is of particular concern in Syria, given the close proximity of Russian forces actively fighting to defend the Assad regime.

The US apparently ultimately alerted (telling, not asking) Russia to the strikes against the Syrian regime. Yet the speed with which such an operation was organised, along with its unilateral and non-consultative nature, does little to dispel the fears of foreign policy realists about the Trump administration’s inconsistent and chaotic approach to world affairs.

The US military’s strikes only intensify that debate. Will the system ultimately force Trump to fall in line with a more consistent and predictable approach to foreign relations? Or will the policy bedlam ultimately prove sustainable, and make unpredictability the new norm in the international system?